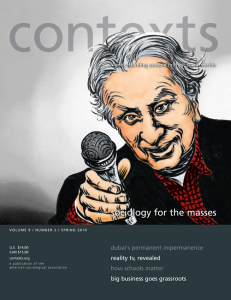 Permanent impermanence in Dubai, love and marriage in the United States, and the astroturfing of the political process. Also, a look back at the work of Studs Terkel, a chat about glam metal and celebrity with Chuck Klosterman, and a data-driven evaluation of how schools matter for equality.
Download this issue
Previous Next

Voting rights and naming the 00’s

Every issue we provide a roundup of sociologists, and sociology, in the news. This issue we look at sociologists helping to overturn felon voting ban in Washington, Kathleen Tierney on Katrina and Haiti, why Yahoo! how discovered Sociology!, and more! Read More

Lying about the News, Bragging about Sex, and Saving Hostages

Each issue, we bring you Discoveries: short, snappy overviews of recently published sociological research. Discoveries from our Spring 2010 issue are available online on … Read More

Artists, activists, and teachers around the world have put cameras into the hands of children, asking and allowing them to share their visions and stories. Read More

Shows like Kid Nation and Jon & Kate Plus Ei8ght have provoked concern over child exploitation. Limited protections exist for kids on such shows, who are considered neither performers nor laborers. Read More

Top Model doesn't necessarily catapult its winners to modeling stardom, but it does advertise many of the realities of the modeling life: judgment, insecurity and product placement, to name a few. Read More

Neoliberalism and the Realities of Reality Television

Often critiqued for its contrived presentation of real life, reality television has not only transformed the television landscape over the past decade, it neatly reflects the neoliberalism of the period. Read More

Health care debates preoccupied the American political scene during the first year of Obama's presidency. Data from November 2008 anticipates what proved to be many fault lines on the road to reform. Read More

Forty years after Roe v. Wade, abortion remains one of the most contentious issues in American life. This article uses the murder of Dr. George Tiller to reflect on attitudes about abortion and declining access to abortion services. Read More

Sociological Images explores how whiteness defines how our sense of normal skin tone through images and language. Read More

Pills and the Pursuit of Normalcy

Whether happiness or height, what constitutes normal has been increasingly defined in medical terms. Two books, Happy Pills in America and Normal At Any Cost, trace how pills such as Prozac and human growth hormone have reshaped our health and cultural definitions of pathology. Read More