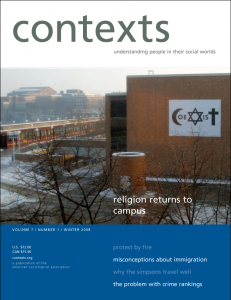 From stem cell research to teaching evolution in public schools, religion and science are frequently pitted against one another in the public discourse. But do scientists themselves see religion as an opponent? Are college campuses today as secular and hostile to religion as stereotypes suggest?

Also in this issue, what effect has today’s wave of immigration had on American society? Does the “Hugo-centrism” of discourse about Venezuela impair our understanding of the country? And what does New York Times columnist David Brooks think about sociology today?

Despite its general neglect, normality has an extraordinarily powerful effect on how people behave. Even those who want to be different use a conception of … Read More

While more conservative in his politics than many sociologists, Brooks often writes about topics of interest to the field and its practitioners while alternating between … Read More

Sociologists on the Colorblind Question

Sociologists today are increasingly questioning the colorblind ideology and what effects it has on American culture and law. Their interest is due in no small … Read More

The Social Structure of Hugo Chávez

Most major news magazines have covered the dramatic processes of change—constitutional reforms, referenda, marches, protests, strikes, and a coup followed by a counter-coup—Venezuela has seen … Read More

As an online special, we’re making this article available in its entirety. You may choose to read either the html version or a PDF … Read More

After September 11, 2001, dying for a cause became indelibly associated with suicide attacks, at least in North America and Europe. Another kind of politically … Read More

The college campus has long been perceived as one of the most secular precincts of American society. Within the academy and mass media, the secularization … Read More

Religion and Spirituality Among Scientists

Scientists are assumed to attack the religious aspects of today’s biggest social issues because they are atheists and anti-religion. But we really know very little … Read More