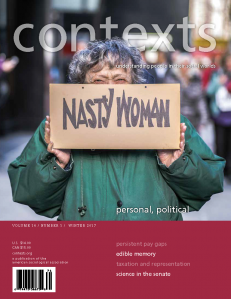 How the Media Makes Protests Matter

The impact of a protest is only as big as the media makes it out to be. Past studies have explored protests’ effectiveness in bringing … Read More

A new paper server for the social sciences, SocArXiv (pronounced sosh-archive), launched in December, with the goal of promoting rapid sharing of academic research. The … Read More

The Constitution protects U.S. citizens in their choice of religion, and, for many, religion is closely tied to American identity. It is, perhaps, why so … Read More

What’s So Cultural about Hookup Culture?

Arman was 7,000 miles from his family, one of the roughly million international students who were enrolled in U.S. colleges last year. Dropped into the … Read More

The Winter 2017 issue of Contexts is available for free online until April 23, 2017 at http://journals.sagepub.com/home/ctx. In addition, links to select articles … Read More