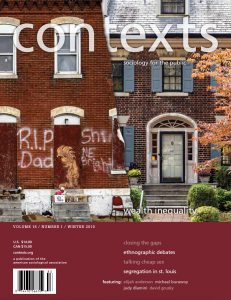 The scholars featured in this thematic issue grapple with the consequences of racial wealth inequality and aim to spur discussions around innovative and viable solutions that hold promise for policymakers and everyday working families.
Download this issue
Previous Next

Past research has found that being highly integrated with others has health benefits; little is known about whether this remains true in prison settings. Read More

The era leading up to and during the Trump presidency has included intense conflict and dialogue surrounding issues of police brutality. In their new … Read More

Does social support benefit the self-rated health of men and women differently? In the Journal of Health and Social Behavior, Katharine Donato and colleagues … Read More

The Whiter the University

Does living in a city change how heterosexual married men and women divide up chores? In Gender & Society, Natasha Quadlin and Long Doan … Read More

Fathering in the Age of Mass Incarceration

Who Participates in Online Political Polls?

After the results of the 2016 presidential election were announced, many big-data political prediction organizations and news sites were left scratching their heads. Their online … Read More