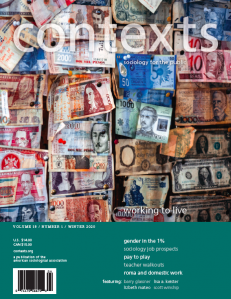 If newly created jobs are mostly low paying jobs without benefits, are they actually benefiting families? If not, are newly created jobs really something to celebrate if a person needs two jobs and overtime just to keep the lights on and put food on the table? Our Winter 2020 issue highlights some of the experiences of a diverse range of workers.
Download this issue
Previous Next

In January 2020, a man robbed a pharmacy by handing the cashier a note stating: “Give me all the money. I’m sorry, I have … Read More

Gender in the One Percent

The disparity between the average income of a one percent household and an average household in the 99% is stark: $2,347,494 versus $76,120. The households … Read More

Is Divorce in Decline?

In marriage, certain issues (e.g., money, infidelity, lack of communication) may lead to divorce. According to Philip Cohen’s recent article in the journal … Read More

Gaslighting is a form of intimate abuse in which one person manipulates the other into questioning their own sanity. Despite the growing presence of … Read More

Increasingly, colleges and universities are looking to diversify the racial makeup of their students. However, previous studies reveal the limits of these efforts. Intraracial … Read More

While developing students’ empathy isn’t a universal goal among sociology faculty, many instructors feel it is an important foundation for helping students develop their … Read More

Why Don’t Women Run the World?

Who runs the world? Girls? Not quite. Women constitute only 5% of Fortune 500 CEOs, 24% of Congress, and only 30% of University presidents. Read More

Domestic employment requires a unique physical proximity of bodies from different social classes, and often from different racial and ethnic backgrounds. People who might … Read More

The photographs in this series were taken between 2017 and 2019 during photowalks in Miami and New York City. None depict actual sculptures, of … Read More

Veganism is the practice of abstaining from animal products, but can it teach us something new about how we see ourselves? Jenny Davis, … Read More