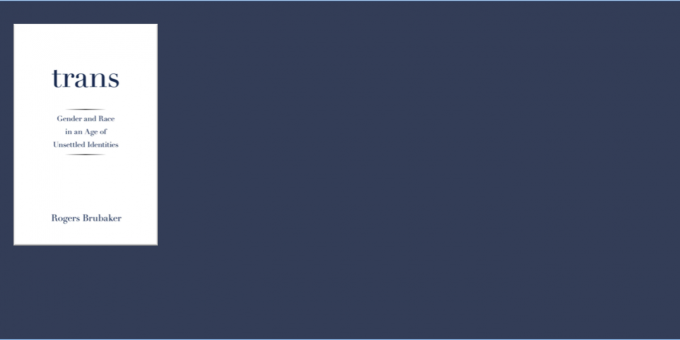 the politics of trans identities

With his provocative new book, Trans, Rogers Brubaker ventures into the gigantic field of gender studies. This is new territory for Brubaker, whose previous work has focused on various aspects of national identity, but he does not completely ignore his past. Trans also offers a (new) theory of race likely to generate serious, heated discussions.

The book’s point of departure is a pair of stories that made major headlines: the transformations of Rachel Dolezal and Caitlyn Jenner. These stories are well known, so I only briefly summarize them here.

Rachel Dolezal was the president of the Spokane, WA chapter of the NAACP and an organizer in the local Black Lives Matter movement. She was seen—and presented herself—as African-American. Unexpectedly, in June 2015, her parents revealed that she was, in fact, born White. Dolezal resigned from her post at the NAACP, but continued to assert that she was a transracial person. Her story generated much debate over passing, choice, authenticity, privilege, and cultural appropriation. She was widely condemned—even ridiculed—for identity fraud, cultural theft, and racial masquerade, and compared to the blackface performers of an earlier age.

At around the same time, Vanity Fair published an interview with Olympic decathlete Caitlyn Jenner, formerly known as Bruce, in which it was announced, after months of speculation, that she would now live authentically as a woman. Annie Leibovitz provided the now-iconic photos for the story, which preceded the launch of a new TV series, I Am Cait. Jenner became the most famous transgender person in the U.S. Jenner’s transformation received mostly positive commentary: she received awards for her courage and advocacy, and President Obama even tweeted his support.

Admittedly, the debate is not just academic. There is an element of barefaced fraud in the Dolezal case: she was not just a Black person captured in a White body. She lied about her racial ancestry, she sued Howard University over racial discrimination. Jenner never denied that she was born male.

But the case against Dolezal and for Jenner is not at its core about how one was a “fake” and the other was “true.” Instead, the argument is biological: a person born in a White body cannot claim to be Black, while a person born in male body can actually be female.

This argument is fascinating because there are no good biological reasons for the rejection of trans-racial and the acceptance of trans-sex claims. Or to be more concrete: there are many more biological differences between men and women than there are between Whites and Blacks. So why then is one transformation legitimate and the other not?

Drawing on his past scholarship, Brubaker explains this difference in terms of ancestry. We are all born as children of both men and women, but to belong to a racial category we must demonstrate that we have the appropriate ancestry. On the surface, this seems like a reasonable claim. But the key to a constructionist theory of race is that racial communities are “imagined communities” (Benedict Anderson) that are rooted in the “belief” of a common culture (Max Weber). By emphasizing ancestry as the reason why trans-racial is unacceptable, Brubaker comes dangerously close to an objectivist definition of race. Thus, he explains the rejection of Dolezal and the acceptance of Jenner not as the result of the social struggles of the Black liberation and feminist movements, but as rooted in objective differences between race and sex.Identities are never given; they are the result of long, hard struggles between the classifiers and classified.

In this regard, Brubaker’s position reflects a U.S. view of race: in this country, the concept of race is typically used to refer to African Americans and it often accepts the “one-drop” rule. The distinction between race and ethnicity is thus grounded in the idea that that race is a biological classification of people, while ethnicity is cultural. In Europe, the word “race” was excised from the vernacular in the wake of the Holocaust. When Europeans want to describe a group of people with common ancestry, they refer to ethnicity, not race.

Of course, what counts as race has changed over time in the U.S. In the 19th century, for example, Black people of “mixed blood” were identified as a separate racial category, as were some groups now considered ethnicities (Jews, the Irish, Italians, Slavs, and so on). This is important for our discussion because, as we know from Mary Waters’s work, trans-ethnic and multi-ethnic identities have become an accepted feature of the American ethnic landscape. As such, mixed Italian-American or Irish-American identities are no longer problematized in the U.S. Far from it: the U.S. Bureau of Census permits Americans to choose multiple ethnic identities. In contrast, it is only since 2000 that Americans have had the option of identifying with more than one race on the Census, and it remains an option rarely exercised (and then most often by Latino immigrants).

In thinking about race and sex, Brubaker’s position is more sophisticated than I have made it sound. Notably, he makes a fascinating distinction between three applications of the term trans: trans of migration, trans of between, and trans of beyond. Trans of migration is the change from one race or one sex to another. In terms of race, this is scorned by Black activists, but in terms of sex, it is permitted (even welcomed) by gender activists. Trans of between is accepted by American activists and the public: no one will object to a person identifying as an Italian-American (trans between of race) and a declining few object to trans between of sex (here Brubaker has in mind gay and lesbian identified individuals).

Trans of beyond is the most radical—and the most Foucauldian—of the three positions offered by Brubaker, implying that classification by race/ethnicity or sex is irrelevant. In the U.S., trans of beyond is vehemently rejected by the government and by the Black-rights movement. If the Census was innovative in offering multiple racial identities, it remains firm that race matters.

As a Hungarian-American who experienced and rejected racial classifications by the Nazis, I found it painfully difficult to answer the race question on the U.S. Census form. I also found myself in conflict with some of my best friends and colleagues when, as vice-president of the American Sociological Association, I objected to the Association’s decision to make a statement about race when conservatives in the state of California wanted to forbid the state from keeping records on people’s racial identity. On all other issues I consider myself progressive; on this motion, I sided with conservatives. Race, I argued, is not an objective reality—it is a social construction. As such, people should be permitted to select their racial categories and even to formally reject such a classification if they do not see themselves in racial terms.

What I did not fully appreciate at the time was that racial classification in America is not just a theoretical matter, it is a political one. African Americans fought long and hard for the right to collect data on race because they needed this information to defend affirmative action policies and civil rights. How could they fight for equality without knowing how many African Americans are underprivileged?

With these ideas in mind, I think, Brubaker’s research question is not whether trans-sex is more acceptable than trans-race, but rather why activists find one acceptable and the other unacceptable. The reference to ancestry in case of race is an ideology that, for the time being, is useful in the fight for true emancipation and equality. Trans-sex, by contrast, serves the political purpose that differences between sexes (genders) should not be used to identify who should qualify for certain social positions or functions. Black emancipation cannot be color-blind, but gender emancipation can live with trans of migration or even trans of beyond.

Identities are never given; they are the result of long, hard struggles between the classifiers and classified. The difference and debate around accepting or rejecting trans-racial or trans-sex is very much part of such a struggle.

Iván Szelényi is emeritus professor of sociology and political sciences at Yale University. He is the author of Patterns of Exclusion: Constructing Gypsy Ethnicity and the Making of an Underclass in Transitional Societies of Europe.

Iván Szelényi is emeritus professor of sociology and political sciences at Yale University. He is the author of Patterns of Exclusion: Constructing Gypsy Ethnicity and the Making of an Underclass in Transitional Societies of Europe.