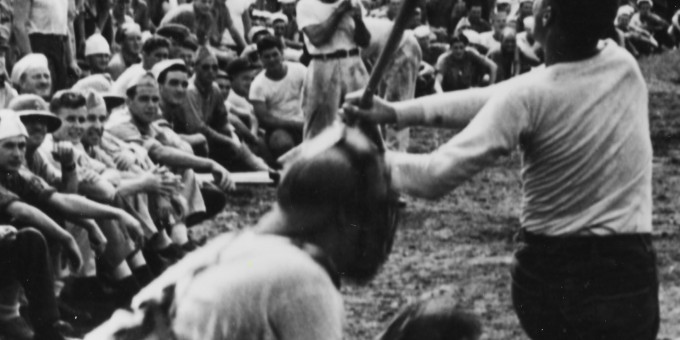 Happy opening day! Although technically the first game of the season was played yesterday, today marks the first day of the 2015 baseball season for the other 28 major league baseball teams. It’s a good time to consider what we can learn by applying a sociological lens to the sport. Baseball provides an opportunity for sociologists to study many facets of society. In fact, a search for baseball in the JSTOR database of sociology journals produces 2,819 results.

This past year, the National Football League brought increased focus to sociological topics such as domestic violence, the relationship between head trauma, masculinity, and health, heteronormativity, racist slurs, and most recently, occupational segregation. So, what sociological lessons can we learn from the study of baseball?

Baseball is known as America’s “favorite pastime,” making it an interesting area to investigate nationalism. Baseball was used as a symbol of American values in World War II and in 1950, Jack Holden and Frances Kay’s song promoting patriotism during the Cold War included the lyrics, “We love our baseball and apple pie / We love our country fair / We’ll keep Old Glory waving high / There’s no place here for a bear.” Although the U.S. national anthem is played before the start of every game, the players come from all over the world, especially Venezuela and the Dominican Republic. (Munenori Kawasaki, a Japanese baseball player, out of respect for his team undertook learning the lyrics to the national anthem while playing for the Seattle Mariners – only to be traded to the Toronto Blue Jays and learning O Canada.) Baseball is also a foreign policy football, as with recent changes in the recruitment of Cuban players. 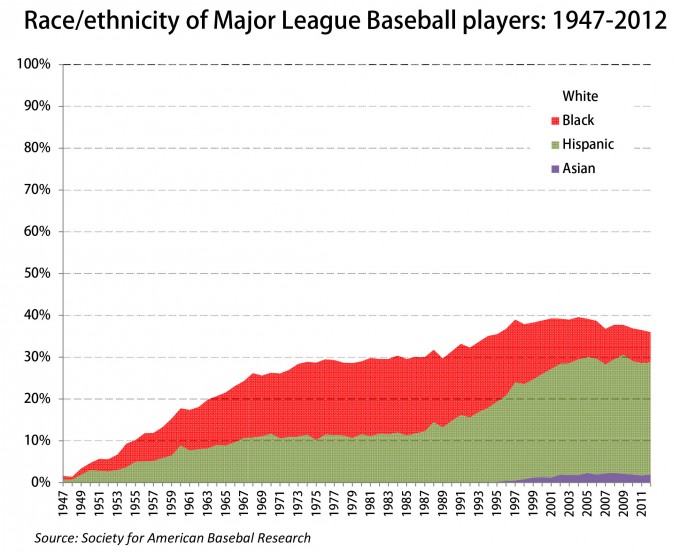 The signing of Jackie Robinson to the Dodgers in 1946 was a sign of racial progress in America and has received much scholarly attention (that’s why the figure starts in 1947). However, racial inequality in baseball manifests in a multitude of ways and has been the primary focus of sociologists who study the sport. Sociologists have analyzed the rise and then decline of African American players, they have studied racial salary differentials (finding no difference) and career longevity (shorter for Blacks), and documented how management and  broadcasting positions are disproportionately White. Changes in race relations in the U.S. and economic conditions are associated with differing racial composition of teams and variations in starting line-ups. A large sociological literature shows that African American players are marginalized through placement in non-central positions. From massive new data available on pitches, we’ve learned that umpires are more likely to widen the strike zone for White pitchers.

Stadiums are prime spots to study cathedrals of consumption, sociologist George Ritzer’s label for places that enchant us to consume. At games, fans become part of the spectacle by cheering on teams, singing along to music, and engaging in provided audience games. Each year teams promote lavish new food to consume while visiting their ballpark. The games have become increasingly commercialized with seemingly every part of the game sponsored, from Coors Light Silver Bullet instant-replay to the Colorado Rockies’ deal with Taco Bell to give residents free tacos every time the Rockies score at least 7 runs.

Similar to the NFL, Major League Baseball provides ample opportunity to learn about gender. Women sidelined in the role of “ball girl” (check out this 1991 New York Times gem on the emergence of ball girls). MLB’s pairing of breast cancer awareness and Mother’s Day celebrations (complete with pink bats) is some sort of statement on gender. Additionally, changing expectations of men’s roles as fathers have emerged in discussions of players’ paternity leave. Although the NFL is just recently attending to domestic violence, accountability for male players’ actions and modeling respect for women has been an ongoing conversation in baseball, at least for some teams.

Although some may find the sport too slow paced to be entertaining, Paul Richards described baseball as “a beautifully put together pattern of countless little subtleties that finally add up to the big moment, and you have to be well-versed in the game to truly appreciate them.” Maybe mastering baseball fandom is good practice for developing the sociological imagination.

Don't forget about Jerry Lim and Brayden King's article on the patterns of missed calls in the strike zone by umpires, discussed here in the New York Times. They find that umpires give pitchers with better reputations a wider strike zone--long suspected--and that they are more likely to get things wrong under pressure, such as calling the third strike.

As a lacrosse referee, I can support this anecdotally. We can never be fully objective, which is what I think makes the system great - perhaps a flaw when it comes to the strike zone, but in lacrosse sometimes you know a better player has control, and therefore is less dangerous.

The museum world, which seldom consults Native communities about the proper care and disposition of their cultural legacy, did not always appreciate the NMAIs new approaches to handling the collection. Furthermore, many of the leading museums in the United States and the world continue to exhibit American-Indian and other indigenous peoples alongside dinosaur and mastodon exhibits. Indian people often joke ironically about the perceptions of Natives as ancient peoples who have vanished from the face of the Earth. This new understanding of curation includes a policy of restoring remains and burial goods of human ancestors as quickly as possible to the appropriate tribal communities.

When I open reference which was suggested me free happy wheels, many kind of the points are give us hints how to operate the game and which diversity you will see in your different tools will be easily handed. Lots of discussion matter which is able for the trust, so why you are getting late just get it hurry.

It sounds good to see more tips here about things which no one describe.

Online Singapore Translation Services is a well-established and prominent name in providing high-quality translation Help online to students for almost a decade. You can trust our academic translators completely to get the best quality translation help in numerous pairs of languages.

I strongly agree with the thoughts of the writer about the dangerous fear. And i appreciate the braveness of the women who are walking alone in a dark alley. Also you can get reliable essay writing service from us to write your quality task easily. Because at that time, it's also difficult for males to cross this kind of alley.

Cricket and India have extremely close ties, though it may not be the national sport of the country, it is the most popular sport in the country. Some of the websites that provide the best betting experience in the field of cricket can be found at Topbetting reviews websites.

Appreciate your thoughts, Yes I have to agree on what you trying to deliver.
paraphrasing tool

This is very interesting topic of discussion. thank so much
word unscrambler