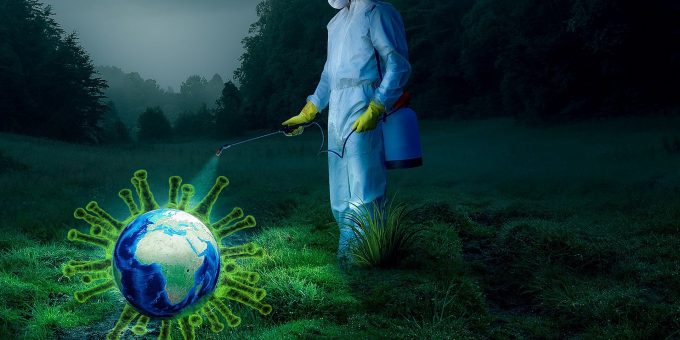 Image by Jordan_Singh on Pixabay

On April 27, 2020, Dove promoted a hashtag #CourageIsBeautiful with the tagline “Thank you, Frontline Heroes.” The next day, Ivanka Trump tweeted about a military aircraft salute to “first responders” to COVID-19 and Reza Aslan tweeted in response “Are they dropping COVID tests from the sky? No? Then go fuck yourself.” On May 7, three JetBlue aircrafts flew above Manhattan, Queens, and the Bronx in gratitude for essential healthcare workers. Likewise, residents from New York to Los Angeles applaud healthcare and other essential workers nightly.

We agree with Aslan’s response. While these are nice and emphatic gestures, as sociologists we cannot miss the role of white supremacy and racial capitalism in providing only gestures to these essential workers, and not actual structural and material resources. Anyone who supports these symbolic gestures without actively demanding PPE for these workers is complicit in their exploitation and marginalization.

It matters that it is largely Black and Brown individuals who are exploited and marginalized. These populations are pandered to, condescended to, and sacrificed without making the kind of structural change that would be necessary actually protect them. This is how white supremacy works — who the vulnerable and exploited workers are is racially patterned. Many who have been deemed “essential workers” are Black and Brown. As scholar Cedric Robinson argued, racial capitalism reveals whose labor is considered essential for maintaining capitalism. In this case, we see how the labor of Black and Brown individuals – whether as delivery workers, hospital staff, subway train operators, grocery store clerks, etc. – is vital for sustaining our capitalist society, even as the actual Black and Brown individuals are ignored and exploited. Rather than being a great equalizer or leveler, COVID-19 reveals, yet again, the interconnectedness between white supremacy and American capitalism.

It’s not surprising that companies are using their capital to symbolically thank these essential workers, rather than protect them. But we need to be clear who these gestures benefit – the companies, not the workers; the owners of capital, not the workers. Just like Teacher’s Appreciation Day does nothing to improve the structural conditions under which public school teachers work, neither do flying planes or creating hashtags improve the actual lives of essential workers.

It is also important that the face of the worker that accompanied the hashtag #CourageIsBeautiful is a Black woman. Black women confront “controlling images”, a term coined by sociologist Patricia Hill Collins, one of which is that they are unusually tough (think, for example, the strong single mother) and consequently not in need of protection. Moreover, as Black feminist scholars have argued, ideas of beauty and femininity have long been attached to white women at the expense of Black women. For example, historian Deborah Gray White describes how enslavement of Black women in the American South was defended by a narrative constructed by white slave owners in which uncompensated labor of Black women was justified because it allowed white women to embody a kind of “soft,” protected, and subordinate femininity, which was seen by slave owners as white (but not Black) women’s natural state. As such, the Dove image is exemplary of one group of workers who are being exploited and pandered to (e.g. Black women). Somehow black women are only allowed to be seen as beautiful and feminine when they are serving others or sacrificing themselves.

Moreover, while we’ve started to document racial patterns in terms of COVID-19 mortality and morbidity, we’ve not sufficiently discussed racial patterns as they relate to labor. States that have reported racial data of COVID-19 deaths demonstrate the disproportionate impact on Black populations. Black Americans who are essential workers are not only at risk for exposure to the coronavirus but also risk exposing their family members, resulting in disproportionality of deaths by race. The majority of essential workers are women, about 52% according to the New York Times, and they are also more likely to be non-white women. According to a study from University of California-Davis, a disproportionate number of workers in essential industries including agriculture, food production, healthcare, social services, and transportation, are immigrants, often from Central America and Mexico.

Many essential jobs, including nurses and bus drivers, are not well-paid nor provide adequate leave policies and health benefits. Even though these workers did not sign-up to work during a pandemic, they are forced to do so. As such, the pandering and the narrative of heroism are used by those who benefit from the exploitation of economically and racially vulnerable populations to distract from the unnecessarily dangerous working conditions they face. Those of us who are privileged enough to be able to work from home, or not need to work at all right now, can therefore see these workers as heroes, rather than as exploited, while many of these workers understand themselves to be “sacrificial, not essential.”

And while Black Americans have been criticized for not following social distancing guidelines, what is missing is a critique of the structural conditions constraining Black life. Only about 16 percent of Hispanic workers and fewer than 20 percent of  Black American workers are able to work from home–in comparison with about 30 percent of whites and 37 percent of Asian-Americans. As such, the lack of PPE, and other protections such as health insurance and paid leave, for essential workers is not just shameful, it is also racially patterned.

This disparity is the result of a capitalist society in which some workers are sacrificed to bolster the wealth, safety, and convenience of others. For example, on April 28, 2020 President Trump invoked the Defense Production Act to force meat processing plants to reopen, despite the known risk to workers, as well as others living in nearby communities, while at the same time declining to force companies to ramp up the production to make needed PPE and testing supplies, both of which are in short supply and are badly needed to protect essential workers.

We think that it is important that we take action to move the country in a better direction. Don’t just share our article (though, of course, we’d like you to do that too). Rather, call or write letters to your elected officials. Demand PPE, access to accurate COVID-19 testing, hazard pay, paid leave, and health benefits for essential workers. Along with calls for better and more comprehensive racial mortality data, demand more comprehensive data as it relates to racial patterns of essential workers, as well as the health consequences of these racial patterns. All of this is necessary in order to better understand, and mitigate the effects of, racial capitalism in present American society.

The key to change will be keeping the systemic issues front and center, as was done in this article.

Yes. The authors keep the systemic issues at the center, aligning with Dr. Ibram X. Kendi's definition of anti-racist work (i.e., not symbolic gestures of equity or belief changes alone but actual policy changes that substantially and directly benefits Black Americans). Love the focus on the root problems, not symptoms.

As a middle-class White man who has spent the better part of a lifetime blindly consuming America's white supremacist ideology, I rely on this type of thoughtful critique to help me better see the ways in which Ivanka and I benefit from unearned "wealth, safety and convenience" at expense of so many of our neighbors. That many of my people must rely on academic articles in order to even glimpse the real human costs of America’s destructive "racial capitalism," speaks to the sick genius of the carefully calibrated social order into which we were born.

Powerful article. Thank you for clearly outlining the issues and providing next steps everyone should take - especially those who are more privileged - like me - a white female able to work from home. This quote really stands out for me personally and I appreciate the directness and insight -

“Those of us who are privileged enough to be able to work from home, or not need to work at all right now, can therefore see these workers as heroes, rather than as exploited, while many of these workers understand themselves to be “sacrificial, not essential.”“

waiting for the medicine to the corona , many are suffering from this virus today

keep an eye on epic sports

This spray is very beneficial for our life to save from Corona-virus which is very dangerous for our life.
cheap dissertation writing service

Tomorrow I accidentally stumble in the world, remember him who did not make me lonely . So do what is best for you cookie clicker

I think that thanks for the valuable information and insights you have so provided here. animal crossing

PPE is the second foremost and social distancing is the foremost ways to keep corona virus infection away from our society. We should wear adequate and safety PPE and have also the pussy games to play when they want to get it.Regular hand washing should be practiced at a regular basis.

I totally agree with all these points. china b2b marketplace

Such a piece of important information. Keep it up. hong kong b2b marketplace

Now we all have to work as one. The virus can happen to anyone. So we all need to be careful that we keep ourselves clean at all times. We must always be careful about these things. Bath aids

Take your special prize https://mrbetwinners.com/. Play now for free, call friends With this casinos you become a milionere.

If your child is facing anykind of a problem with hearing loss then you should immediately take the proper care of that. And child hearing protection if possible then do it as soon as possible. Also, make sure that you are trying to prevent this kind of situation.

We can claim that freeloginapponline.com is a gambling establishment with an extremely remarkable background and also of an outstanding degree of appeal. It is available practically around the globe, with the unusual exemptions of the nations where betting is prohibited in general. A terrific option of video games, their remarkable high quality as well as rate of packing on both desktop computer and also mobile variations are one more benefit of the supplier. As well as if you relocate even more, you will certainly find very pleasant benefits, a fantastic commitment program and much more geeks that a good casino site can offer. By the way, some even more words regarding the safety and security online: none employees of the casino are eligible to ask you for your login information. So, if you also get such a request, does not matter in which means and also issue it is done, instantly let the casino representative recognize as well as take all the feasible measures to boost the safety degree of your account. The casino team will help you in anything is needed to do so.

The Badr vs. Benny fight was initially expected to take place at the Ahoy Arena in Rotterdam, Holland in June, serving as the headliner of

You provided a lot of good information, it was good because it was so helpful to me. kiss novel