Don’t use wounded veterans as symbols for your cause

After San Francisco 49ers Quarterback Colin Kaepernick sat on the bench during the national anthem at a preseason NFL football game on August 26, many in the veteran community became angry. Colin later made a statement saying that he feels he cannot show pride for his nation’s flag when it is a nation that oppresses African-Americans and other racial minorities.

In the days following this event, I started to see a slow trickle of Facebook posts from service members, veterans and veteran supporters — most of them bashing Colin for his actions that day. News outlets even ran straight to veterans — what do veterans think about this? While one article I read included a pretty in-depth interview with a veteran, the basic set-up was clear: Let’s use this combat veteran, hopefully we’ll get some sort of juicy reaction out of them! Who could be more angered about this than combat veterans?

The quest for the “veteran opinion” has only strengthened as the viral media story dragged on. Then the hashtag #veteransforkaepernick began trending on Tuesday, prompting further media interest in the diverging views among the veteran community. With the San Francisco 49ers set to play their last preseason game in San Diego, many wondered what Colin would do in the face of a military-centric crowd, especially since the game fell on a “Salute to the Military” night. Drawing loud boos, Colin kneeled during the national anthem, later saying it was a gesture of respect for the servicemembers and veterans being honored that night.

From the beginning there was one dominant image that kept coming up in my Facebook feed that I couldn’t stop thinking about. It was an image of Colin sitting on the bench at an NFL game juxtaposed with a Marine in his dress uniform holding himself up by the handles of his wheelchair with no legs, just the fabric of his dress pants bunched underneath him on the wheelchair seat. The image was captioned with “No legs. No $114 million dollar payday. Still stands for the national anthem.” In the popular meme version, the picture had big block letters scrolled across it that said: “While Colin Kaepernick refuses to stand, we have real men who show respect for our nation.” There’s no name, no context, just a photo of this Marine being used by other veterans in the same way that they are often used by the media — as props to make a point. 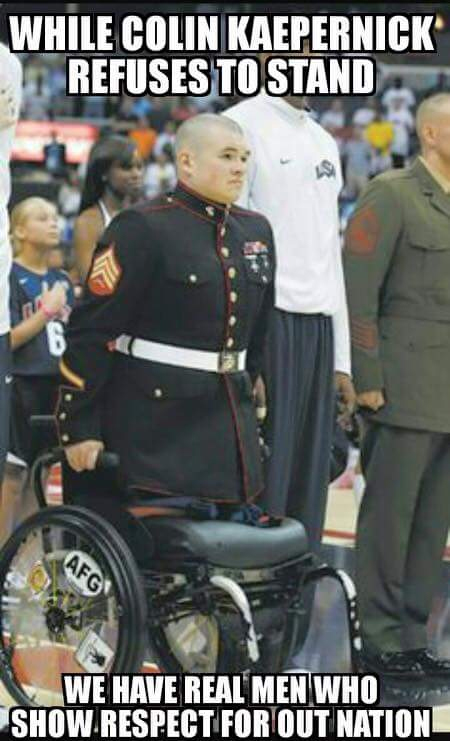 The image is of Marine Corps Sgt. Zachary Stinson of Chambersburg, Pennsylvania. He lost both his legs and has damage to his hands from an improved explosive device while serving in Afghanistan in 2010. The picture was taken at an exhibition basketball game in July 2012 for the Olympic men’s basketball team in Washington, D.C. The Facebook post, the meme, the side-by-side image of Colin and Zachary — none of this was produced by Zachary himself. If it had been, I wouldn’t be writing this article. Instead, Zachary’s image was used to craft a message that wasn’t his.

The misappropriation of images of wounded veterans isn’t something new to this community. One veteran I interviewed for my dissertation research had a short video clip of him immediately after being wounded that was floating around various media sources. When it was used by an organization in a way that he disagreed with, he reached out to them and was successful in getting it removed from their promotional materials.

The use of this snapshot from four years ago in the wake of the Colin Kaepernick scandal is superimposed with assumptions, judgments and meaning that erase Zachary; you don’t see the person, you just see him as a wounded warrior. One online publication even led with the headline “US Marine with No Legs Destroys Colin Kaepernick; SPEECHLESS!” Do you think Zachary enjoys being called the “US Marine with no legs”? I wouldn’t, and I’m guessing he doesn’t either. He’s a person, and the way he positioned himself for the national anthem during that July day was his own choice, his own way of honoring his country during the national anthem.

I bet you’re wondering what Zachary thinks of all this? Did I reach out and ask him about his thoughts? The answer is no, I didn’t (and we don’t see any news accounts that did, either). Zachary is busy living his life. He’s married and has a daughter, and if he is like most of the wounded veterans I’ve interviewed for my dissertation research, he’s probably focused on the things that are in front of him rather than the past that is behind him. While our national focus and attention on wounded veterans is useful in raising awareness and providing support, it can also hold our veterans back. We tend to box them in and see them as perpetual “wounded warrior” symbols rather than people living their lives.

It is time that we stop using images of wounded veterans for our own pleasure, inspiration or political messages. When we do that, we de-humanize them and their sacrifices. Wounded, injured, and ill veterans are unique and complicated individuals, just like everyone else. Their service and sacrifice should be understood within the context of their own lives and their own words. If we really want to respect veterans, let’s stop using them as tools for our own agendas.

Sidra Montgomery is a graduate student at the University of Maryland. Her dissertation research examines the experiences of wounded veterans and the social construction of “wounded warrior.” She is a military spouse and serves on the Military Family Advisory Network advisory board. An earlier version of this post appeared on spousebuzz.com.

I want to thank you, from the bottom of my heart, for this post. I am married to a disabled Vietnam veteran and I'm so sick of people using him and his comrades as their reason to run amok in the stupid department.

The bears of the Sierra Nevada's are much more acclimatized to humans than the Rocky Mountain bears. That also means that they associate humans with food. We never have our food out unless we are eating it. Unfortunately, in every campground you see people to leave food or trash out. Bears know this and scour campgrounds every evening, night, and morning looking for easy pickings. Fortunately, they are not too interested in us, just the food we bring. Although the rules are to lock away anything with a scent (shampoo, deodorant, soaps) many people don't and that contributes to the problem. I get so frustrated that people don't follow the rules. I've seen plenty of bears and have never felt threatened although it is always an experience that gets the heart pounding. Have a great trip.

This was a great way for us all. tiktokfollowers.net

Colin Kaepernick has nicely addressed to the people at that day. He actually served the country in the right way. Click https://write-my-essay.online/ for more help in assignment writing. I think other army officers should also learn something from his character.