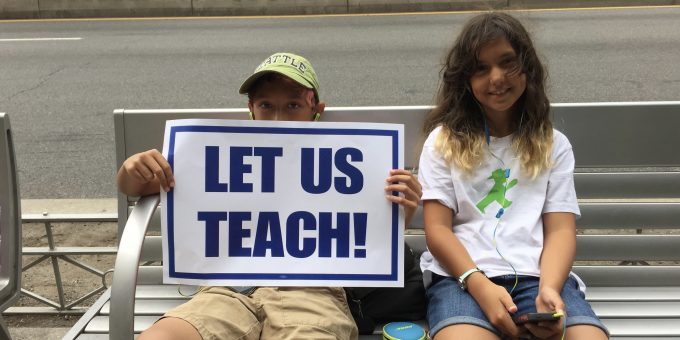 The author's offspring locked out of campus.

Happy holidays! I’m going to tell you a Christmas/Hanukkah/Kwanzaa/Festivus tale of the faculty union that could, almost did, but then ultimately didn’t. And what you can do to avoid their fate.

At the end of August 2016, Long Island University’s administration announced they would lock out the unionized faculty at the Brooklyn campus. (A lockout is management-initiated, while a strike is union-initiated.) This is a move that had *never* been used on unionized faculty in the United States. The lockout lasted from September 2-14.

The backstory to the lockout is LIU-Brooklyn faculty found out in summer 2015 that there is roughly a 20% disparity in pay between full-time faculty there and the faculty at LIU’s CW Post campus, among other issues. LIU-Post is a suburban, largely White campus whose enrolment has been steadily declining for the last decade. (In theory LIU is one university but each campus is essentially independent.) LIU-Brooklyn is an urban, mostly poor and minority/immigrant campus whose downtown Brooklyn real estate value is, well, a lot. The possibility of administration selling the campus and taking that money for the White campus was always just beneath the surface and the subject of intense, plausible rumors. Nearly all Board of Trustees members and upper administration, including the president, Kimberly Cline, are White, and most live in Long Island, including Kimberly Cline. The president doesn’t spend much time at the Brooklyn campus, and since the lockout hasn’t come to the campus at all.

LIU-Brooklyn’s union contract expired on August 31 and the administration, with the blessing of the Board of Trustees decided to lock out the faculty before the Labor Day weekend. Classes didn’t start until September 7, the following Wednesday, and the union had already scheduled a ratification meeting for that Tuesday. The terms of the proposed contract were so bad that union members early on knew that they would reject it. The president and the Board knew that too, which is why administration announced on September 1 that faculty would be locked out the following day, Friday, at midnight. This was obviously a move to put the financial hurt on the faculty, with no perceived cost to administration, as there would be a full week of pay loss for faculty before students showed up for classes.

The administration and Board of Trustees had prepared months in advance for this. Dozens of replacement faculty were hired through monster.com (no, seriously) and a great number of administrators—from IT on through various high-level administrators—were called in to teach. Syllabi, some ten years old, were uploaded to our course management system over the summer without our knowledge or consent. Administration also ordered books for every class; they were determined that the replacements would teach the whole semester if necessary, and replacement teachers were told to learn the materials no matter how far afield from their expertise (and some instructors only held bachelor’s degrees) and teach it.

On the first day of classes, the students seemed confused. But by the second day, young student leaders, including many veterans, organized daily walkouts. A large number of replacement instructors didn’t bother to show up. Many administrators dropped off attendance sheets and left. Other administrators tried but failed to teach. A handful, though, were doing ok.

By locking us out, administration inadvertently gave us a priceless gift. Media coverage by local/national print and web, local TV and radio was widespread, and largely in our favor. The term “lockout” was in every article’s title, including that bastion of pro-unionism, the Wall Street Journal. That kind of sympathetic and extensive coverage was unlikely if we had gone on strike.

As if that wasn’t bad enough, the New York State Education Department sent a stern letter on September 13, questioning the qualifications of the replacement workers and threatening an audit that could end with deregistration of programs.

The lockout was a fiasco, and LIU administration knew it. Their negotiating team ended the lockout the next day at the negotiating table, which meant we were to go back to work, and the union declared victory.

Now to this point, we had certainly done all the right social movements type stuff. Or, more accurately, things fell in our favor as the lockout looked to be a massive miscalculation on the part of administration. We had all kinds of leverage; we held a lot of great cards. But from even before the lockout, many of my colleagues and me were terrified. We had a pretty good idea all these things would come to pass and our negotiating position would be strong. Our fear was of our own union.

If you play poker, you can see our union had what looks like a straight flush when the administration ended the lockout. That’s a really strong hand. Only a royal flush beats this hand. Administration never, ever has a bad hand, but in this analogy, I’m thinking they’re holding three of a kind. If you have a straight flush, what do you do? Go all in. What does that mean? I would think that when they say they’re ending the lockout, you say, “Ok, we want parity with the other campus, a raise, back pay, and remove all the onerous workplace conditions in your last offer.” Before you say, “Hey kid, you’re asking a lot!” basically this is just asking for what the Post campus faculty get.

So what did the union do? They agreed to go back under the terms of the old (awful) contract until May 31, which means we can’t strike, the best play a union generally has. And what would a strike on June 1 accomplish anyway? (Though if we don’t sign a contract by then, administration could still lock us out June 1 and no one would know.) Administration agreed to a nonbinding federal mediator, whose advice they were under no obligation to heed. And they didn’t. The negotiations through December were so futile that the mediator quit. The pay parity issue is under binding arbitration, and the lost pay during the lockout (administration docked us 8 days of pay) was part of an NLRB hearing for an unfair labor practice, which we unsurprisingly lost.

Back to the poker analogy: this play is not all in; it looks more like a fold. Now I know our union leaders disagree with this assessment, as do our parent unions, the New York State United Teachers, and the American Federation of Teachers, the latter of which sent us a lawyer who helped to craft this agreement with administration. These people have done negotiations before; I never have, so what do I know? (Though they have never had the gift of a lockout in negotiations, so this is uncharted territory for everyone.) But they clearly played afraid. There were afraid that faculty would get tired of being out on the picket line, and afraid that administration could declare a bargaining impasse and then legally impose their last, best offer on us. Yup, they could have. But that’s what strikes are for. And if we had struck immediately when they ended the lockout, well, the frame of “lockout” was already set—the fact that it would have changed into a strike probably wouldn’t have affected the PR and student support we were getting. And administration’s problems with the State Education Department would have intensified and federal grants would have been in jeopardy as the semester could have been threatened. But we didn’t strike, or even go back to work without a contract holding onto the threat of a strike. Instead, we went back under contract until the beginning of the summer, a completely dead time in the academic calendar. Simply, we caved.

And herein is the lesson for faculty unions, and I’m guessing for students of social movements. You can protest all you want—in fact our union and faculty are still protesting. Their last effort was to go to a Board of Trustees meeting to ask for President Cline’s resignation. But the real power, and measure of success, is at the table. We’re probably toast. Why do I say that? Even though the lockout was an unmitigated disaster for administration, the Board extended Cline’s contract for three more years and gave her a unanimous vote of confidence. If we were actually victorious (as the union declared), with the kind of pressure that was bearing down on administration, and ultimately on the Board, would they have made this decision? Doubtful.

Now, the university and union will continue to negotiate until a contract agreement is reached. But what leverage do we have now? The press is gone. Students are back in class and are happy. (Well…) Qualified professors are back in the classrooms, so the Education Department is likely satisfied. So what cards do we hold? Two pairs? One pair? Whatever, it’s a weak hand. We might still end up with a tolerable contract, but that will be completely due to any largesse of the administration. They’re under no pressure to do so, but if they do, it will be as a magnanimous gesture. Though I’m not going to hold my breath.

So I’ll end with some unsolicited advice deriving from my analysis of this hot mess for those of you who have faculty unions and you’re going on strike, or about to be locked out, as truly, the lockout is the future:

[For a fantastic, comprehensive recap of the lockout, see this resource page compiled by Eileen Clancy. Also, look through #LIUlockout on Twitter.]

Syed Ali is the co-editor of Contexts, and has been on the faculty of LIU-Brooklyn for 14 years. He was on the LIU-Brooklyn faculty union’s executive committee in 2011 to witness them screw up their last contract up close and personal, not too differently from how they’re doing it now.

Marvelous! This is a great account, filled with wise advice. Our entire state university took on the chancellor and trustees. We won and he leaves in disgrace in June. Non-union faculties are living in a fantasy that will eventually turn into a dystopia. Congratulations!

Well said. Clear and to the point. We do not have any leverage.

In any case, students should fight for their rights. But such things take a lot of time and energy, while homework needs to be done. In this situation, it is logical to buy dissertations on https://uk.edubirdie.com/buy-dissertations - here you can do it fairly quickly and efficiently, after which you can stop worrying about your deadlines and continue to do your own thing.

Now the working for benefit of students should cater to all academic issues ease to provide and facilitate all of the academic facilities like schools colleges and universities. I also have to also writes features posts about students' issues in https://www.dissertationplanet.co.uk/ interest that benefit students.

good post about I also has to also writes features posts about students' issues in https://www.dissertationplanet.co.uk/ interest that benefit students.

good post about I also has to also write features posts about students' issues in https://www.dissertationplanet.co.uk/ interest that benefit students.