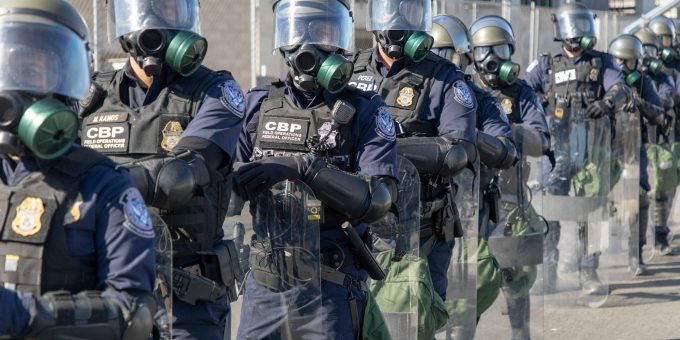 U.S. Customs and Border Protection personnel along with DOD personnel at the San Ysidro Port of Entry, November 2018. Photo by Mani Albrecht, US Government Work.

Tear Gas? This Is America.

More than 7,000 Central American migrants are currently in Baja California, Mexico, waiting to apply for U.S. asylum. They have traveled thousands of miles, fleeing violence and political crisis the U.S. helped to create (the U.S. supported a 2009 Honduran coup that drove out the democratically elected government of President Manuel Zelaya and led to wide-scale violence in Honduras and its surrounding areas). In response to this incoming wave of migrants, the U.S. Department of Homeland Security (DHS) has encouraged people to seek asylum at ports of entry instead of at other points along the border, and Central Americans are following that directive. Predictably, the DHS is behind on processing these claims. On Sunday, November 25, asylum seekers grew at the border began to protest the delays. In response, the San Ysidro port of entry, one of the busiest in the western hemisphere, was closed. U.S. agents fired tear gas and rubber bullets at asylum-seekers trying to cross into the U.S. By the end of the day, both sides of the issue were up in arms: some pointed to the asylum-seekers as invaders, some were appalled at the U.S. response to people they see as refugees, and many expressed their dismay at the America they were beginning to see.

While many social scientists would agree this issue is a humanitarian crisis, it is also but the latest example of the U.S.’s history of exclusion of non-White groups. It is a reminder of who is presumed worthy of “Americanness.”

Below, a review of exclusionary U.S. immigration policies.

Exclusion of non-White groups under the Trump Administration

Anthropologist Leo R. Chavez argues that the “Latino Threat Narrative” portrays Latinos as incapable of integrating into U.S. society. Thus, they are framed as an invading force that intends to destroy the American way of life. This narrative is a “cultural dark matter” filling debates about immigration, citizenship, and the U.S. nation state with taken-for-granted “truths” about Latinos as a group. As a result, Latino immigrants and native Latinos alike are targets of potential immigration enforcement. They are also prominently featured in media spectacles any time immigration is the topic of conversation. The pervasiveness of the Latino Threat Narrative is precisely what Donald Trump banked on from the beginning of his presidential bid. It seems to have worked.

Trump has also vehemently attacked Muslims and African Americans. On January 27, 2017, he signed Executive Order 13769, otherwise known as the Muslim Travel Ban, which banned people from seven predominantly Muslim countries from entering the country for 90 days, suspended entry of all Syrian refugees indefinitely, and forbid any other refugees from entering the country for 120 days. This ban has undergone three iterations and was upheld by the Supreme Court on June 26, 2018.

Chandra Reyna is in the sociology program at the University of Maryland. She studies Latinx families, racial identity, and racialization.

Check out Kim's AC Contributor Page - follow this link. To maximize your
site's rankings, it critical to get back-links from sites with good page rank numbers.
This provides the site with increased traffic. http://www.bujpn-game.us/

America now has many social problems.

A great article showing all these terrifying phenomena as they are. It’s very hard and hard for me to read this because I always want to help people who have experienced or are experiencing violence in any form. Therefore, I advise you to read the article https://gradesfixer.com/free-essay-examples/feminism/ which opens up a look at all these things from a different angle. I think violence should be stopped.

I totally share the comment right below about not 1 person in the picture looks like one who needs asylum.
These are all illegals - hoping to make some money - and then some crime and go back and forth - terrorizing both societies.

Who are these do gooders who think they are eligible for asylum?
essay typer service

Thanks for the information your post brings. I see the novelty in your text, I will share it for everyone to read. I look forward to reading more articles from you.
vex 3 online

Valuable info. Lucky me I found your website unintentionally, and I'm surprised
why this accident did not came about in advance!
I bookmarked it.

Both ADT and Frontpoint are known to have top-quality customer support. They address all the clients` needs efficiently and are super friendly. Also, their agents do their best to resolve all the issues in favor of adt vs. frontpoint clients. Even though there might be some failures, they are connected rather with some objective factors rather than with the personal or professional features of customer support.

Excellent Tips! Your posts is very valuable, details are awesome, there are lots of posts available at online, but this post looks impressive for one and all, thanks for sharing.
instadp

In a match of approximately equal teams, a handicap on kills of 5.5-7.5 will be issued. This means a simple thing – with a high degree of probability, you can bet on your favorite with a minus handicap. As a rule, the winning betway esports team has a gap of just over five kills in its direction. For example, if you take the OG team, it will have a lot of wins, no matter if they lose in the killings or do not have a big advantage. The same refers to Team Secret.