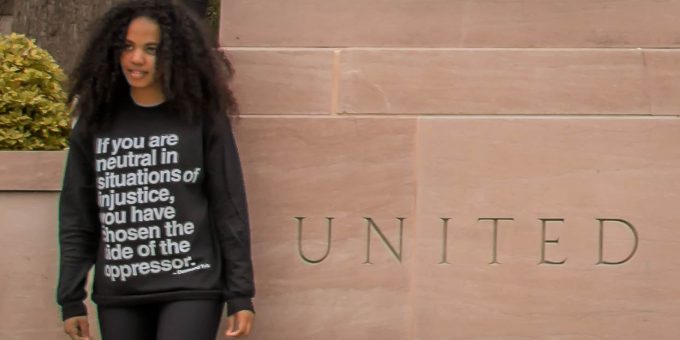 Attending the Women’s March on Washington felt cathartic. To see so many people – hundreds of thousands – who care about social justice and are compelled to resist oppression felt remarkable. The energy, clever signs, and generational age span made me optimistic about the future. Attendees were cheerful and overwhelmingly courteous; folks politely asked permission before taking a picture of another person’s sign, and I made new friends while waiting in a long line to use the bathroom. The mood was jovial and hopeful; a mass of people wielding the power of democracy and creating a collective voice for equality.

In the days immediately following, my social media newsfeeds were filled with articles pointing out the flaws of the March – articles calling for intersectional feminism, ways the March failed to be inclusive of trans* women and men, women of color, and sex workers; how attendees were mostly White middle class women (which influenced interactions with police), and so on. These blog posts, essays, tweets, and news articles appropriately called out ways in which the March failed at being inclusive, despite its radical platform. While attending, I had also internally formed some of my own critiques; I noticed that the demographics of those attending were not as representative as I had hoped, and the former event planner in me felt annoyed at the lack of volunteers, communication, and signage. Despite this, I had mostly kept these critiques to myself, thinking I shouldn’t dampen the exciting energy surrounding the March.

As I made my way back online following the March, I found that I was not alone in having some critiques, and many others were expressing their analysis on social media and in follow-up news pieces. As a sociology PhD student and former staff member of a University Women’s Center, these arguments were not new to me: feminism must be intersectional and the history of the U.S. women’s movement has been a history of middle- and upper-middle class White women assuming their experiences are monolithic of all women. Despite the fact that I agreed with these critiques, I also felt exhausted by them.

President Trump spent his first week in office issuing Executive Orders. Between the alarmist “Call Your Representative” action alerts (I live in D.C., so out of luck on that one) and the critiques of the March that seemed to dominate my news feed, I found myself feeling apathetic, and then feeling more dispirited about how my privileged identity allows me the space to feel apathetic. Interspersed with these critiques, there were also people posting photos of Marches they attended, both in D.C. and across the country. I watched as follow-up conversations and events were organized to talk about next steps, to turn this moment into a movement. The March was not perfect, but would it have been better to not march at all? I worried about the way progressives spend a lot of time in-fighting, which contributes to the current reality of a Republican-controlled White House and legislature. If we wait for any proposed action to be perfect, we will always be in a space of theory-building and dialogue, with no action.

I found myself searching for a solution to this tension: should we mobilize, as the Women’s March had done, even if it isn’t perfect? Yes. Should we spent lots of time in dialogue, seeking to ensure those with marginalized voices and experiences are at the center of any strategy? Yes.

One of the best tools of oppression is to create false binaries: there are only two options, and you must choose between them. This creates an “us vs them” mentality, which is useful at creating factions in groups who have some common interests. If this movement for justice is going to be successful, our rallying call needs to be both/and. We should both mobilize and be responsive to critiques, spend time in dialogue, and constantly reflect on ways to be more inclusive. I once attended a workshop where Mia Mingus described the need for social change movements to have two interconnected elements: (1) folks in the trenches holding the frontline, providing direct service, responding to needs, literally ensuring people are fed and have shelter; AND (2) those a bit further back from the frontline who can engage in analysis, critique, and reimagining a new future. These may not be the same individuals, but the movement needs both people addressing the symptoms of our current social problems and critiquing the root causes to ensure those problems don’t exist in the future.

Big tent politics and coalition building are messy and uncomfortable. We won’t agree on everything, and that process of engaging with one another is what will lead to a strong movement and better outcomes. It’s easy to get bogged down by making tough choices with limited resources: direct action or dialogue, identity A or identity B. If we’re committed to creating a more just and equitable future, the answer needs to be both/and.

Brittany Dernberger is in the Sociology PhD program at the University of Maryland, College Park

That is a fantastic car 🙂 I would like to buy such one once I graduate from University. I hope to do that this year with the help of an academic writing AU Assignment Help company that has a team of professional writers who work on my papers. Feel free to check their official website assignment-help-au.com for more information and contact the Support team that is available 24/7.

This is the very nice blog online i love it very mush so got it here schmoozetech.com latest web site to given you all way of information

We understand how important the information transparency will be in the process of cooperation with dating services, so every mail ordered wives single guy or girl who decided to contact a dating service should understand how the service will be formed.First of all, acquaintance with real mail order brides takes place. To fulfill your duties at the highest level, international dating services need to know everything about a person’s personality, because from your little character traits a complete image is formed. Sometimes, a detail that seems so insignificant can play a significant role in the fate of a couple.

Local mail order brides attract foreigners not only with their exotic appearance but also with a number of other personal qualities all brides should have. Among Asians, there are brides for every taste. You can meet Arab women with gorgeous black hair and dark eyes, local brides with slanting dark brown eyes, Japanese or Turkmen women who are a kind of mixture of mexican mail bride Europeans and Asians. They all have natural beauty and rarely wear makeup. Most of the Asian mail order brides are short and petite, which makes their appearance even more exotic.