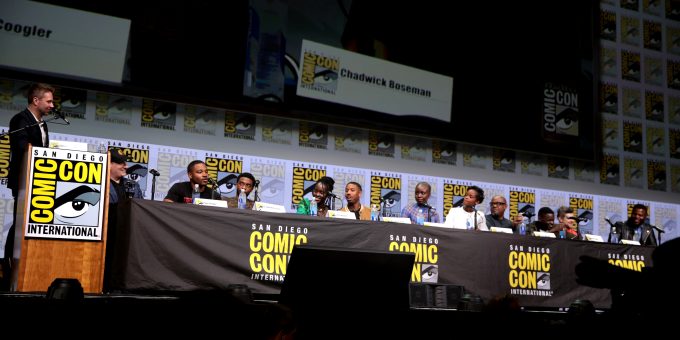 Afrofuturism has long used techno-culture and science fiction as a lens for understanding the Black experience. Expressed through art, music, philosophy and various forms of media, it explores the Black experience across the African Diaspora. It places the imagination at the core by providing an alternate narrative for understanding Black experiences, often by chronicling stories of alien abductions, time travel, and futuristic societies. Afrofuturism is expressed in the music of artists like Sun Ra and Janelle Monáe and books like Octavia Butler’s Kindred, which uses time travel to explore how the institution of slavery and its intersections of race, gender, and relationships shape both present and future societies.

Like science fiction, Afrofuturism often asks questions like “Who defines what is human?” and “Who decides which groups have rights?” The world of “what is” can be supplanted by the world of “what ifs.” The worlds imagined in this cultural form go beyond simple science fiction stories created by Blacks; these stories, art, and philosophies center Black Diasporic life and allow for a way of viewing Black culture in a fantastical, creative, and hopeful manner.

Afrofuturism triumphed in mainstream American theater with the enormous success of the film Black Panther. When it opened on February 16, 2018, Black people all around the country embraced it fully—perhaps most visibly and pointedly as, on red carpets and in long lines at theaters, they donned fur coats, dashikis, crowns, lion sashes, and outfits inspired by precolonial African kingdoms. Many adorned their faces and bodies with African tribal designs. This joyful expression of pride was not only from watching a nearly all Black cast in a major movie, but also a collective exhale. Science fiction and media more generally have systematically neglected and narrowed Blackness; Black Panther was an undeniable expansion of Blackness. The outpouring also illustrated what Signithia Fordham and John Ogbu have described as a “fictive kinship” between African Americans, formed not by DNA but by shared experience. (Of course, as Alondra Nelson explains in The Social Life of DNA, DNA is important and through the mapping of the human genome, it has allowed many Blacks to establish ties to African ancestral homelands.)

Black Panther centers on the ascension of Prince T’Challa to the Wakandan throne. He becomes King and spiritual leader of the most technologically advanced country in the world—the only country in Africa untouched by European colonization. It’s a world made possible by a mountain of Vibranium (the hardest material in the universe) flying through space and colliding with Africa thousands of years ago. The cataclysm altered Wakanda’s environment and created a fusion of plant life that was both Earth and alien. This story’s alien and otherworldly emphasis gives it an Afrofuturistic perspective and acts as a vine that threads the past, present, and future throughout. The heart-shaped flower created by the fusion is given to a warrior shaman by goddess Bast (in the form of a Black Panther) and granted the original Black Panther the strength to end conflict between the five warring tribes in Wakanda. As we enter the story, Vibranium runs every aspect of life in Wakanda and is the vehicle that will drive future liberation.

The film’s ability to imagine a futuristic and alternative uncolonized Africa provides audiences with positive portrayals of Africa beyond stereotypes of civil warfare and violence, disease, famine, and other social ills. It also left Black moviegoers feeling a sense of pride and connection to a Pan-African identity. According to W.E.B. Du Bois, this Pan-African identity connects Black Americans to Africans through shared racial struggles and resistance to colonization.

Afrofuturism projects often bend time and space, merging both ancestral history and future possibility with the spiritual in ways we also see in Black Panther. This theme is most evident in the film in T’Challa visiting his dead father on the ancestral plane. Their unbreakable chain of kinship emphasizes the knowledge of one’s past. This resonated with Black people who were disconnected from family lineages due to the Transatlantic Slave Trade, which made and remade kinship patterns within the institution of slavery. And so it is powerful when T’Challa takes the purple flower elixir and enters the ancestral plane. Dressed in white, he stares at the purple sky and enchanting trees, the plane populated by Black panthers who are ancestors and past leaders of Wakanda. When T’Challa bows to his father, his father tells T’Challa, “Stand up; you are the king now.” T’Challa is assured that he can assume this role.

Yet, the theme of the ancestral plane also highlights the schisms and inequality of the African Diaspora when the main antagonist, Erik Stevens (Killmonger), a young Black American soldier, defeats T’Challa and takes over the mantle of Black Panther. For Killmonger, the plane is a small apartment in Oakland where he meets his father N’Jobu. In response to Killmonger’s desire to see Wakanda, his father says, “I fear that you may not be welcomed.” Puzzled young Killmonger asks, “Why?” With tears in his eyes N’Jobu claims, “They will say that you are lost.” This scene sets up a powerful statement about the desire and yearning of Blacks like Marcus Garvey to connect to Africa, establishing a unified ancestral plane, but also the insecurity of not knowing how they will be received.

These wills of imagination are affected by colonization and illustrated by the dichotomy between T’Challa and Killmonger. Each is focused on continuing his father’s legacy, one rooted in the past, the other in the present. Both are reliant on the future. T’Challa clings to an isolationalist policy, while Killmonger wishes Wakanda would use its technology to arm Black peoples to fight colonization and its postcolonial effects globally. This presents an old but not easily answered ethical question often posed in scifi: “Should technology or ideology lead to human evolution?” In his struggle, Killmonger emerges as a hero to many Blacks who can identify with his pursuit of the true villains: colonization and racism. Throughout, he is characterized by his roots in American institutions (e.g., the CIA and military academies). The violence Killmonger ultimately undertakes is carefully framed within a long history of oppression, military training, and racial socialization.

T’Challa is also guided by the Divine Feminine, another common theme in Afrofuturism. The movie weaves a picture of powerful women decoupled from European ideas, significant and celebrated, past, present, and future. They are free-thinking and agentic. From Nikita, who leaves T’Challa to free oppressed people in Nigeria, to General Okoye, head of the Dora Milage and considered the most powerful warrior in Wakanada, who threatens to kill her partner if he doesn’t yield to Wakanda, these women’s decisions are their own. These powerful images reject many of the negative tropes of Black femininity elaborated by scholars like Patricia Hill Collins and Melissa Harris-Perry and too often associated with Africa and patriarchal religious traditions. The egalitarian nature of the relationships between men and women in Black Panther are, instead, portrayed as seamless and natural. Women choose the paths and guide the society. Specifically, the all-female warrior army sworn to protect the King of Wakanda, the Dora Milage with the shaved and tattooed heads is a celebration women’s power. These images reflect aspects of historical reality that is often suppressed or ignored. It strongly pulls from aspects of precolonial Africa, including the Kingdom of Dahomey (modern day Benin), which had fearsome female warriors alongside powerful kings.

Ultimately, Black Panther’s imagination fuels its Afrofuturistic vision. It dares to embrace the idea that, like Sankofa, learning from the past may be the best way to live in the present and change for the future. And fueled by Afrofuturism, its presents a world that both asks us to remember and acknowledge Africa as our root and understand social forces, like colonization, that have limited social progress. All the while, Black Panther never lets the viewer forget that imagination gives us agency: if we can dream it, we can change it.