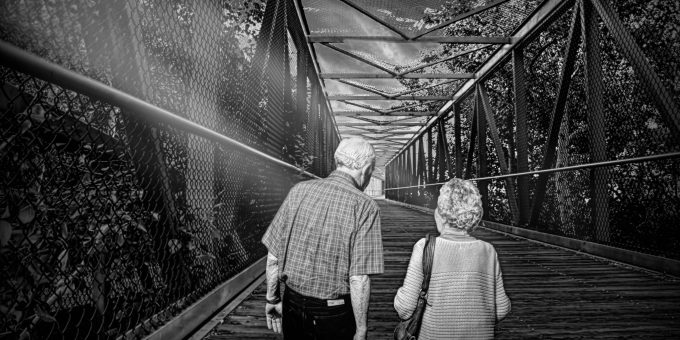 A cute couple takes a walk across a bridge in Mountain View, CA. Vee, Flickr CC

All the Single Oldies?

Looking for love later in life is stressful and can lead to negative mental health outcomes. The divorce rate among people over fifty has doubled over the past twenty years. However, this phenomenon deemed “gray divorce” has not been well studied. In the Journal of Health and Behavior, I-Fen Lin and colleagues offer insight into the pathway for those who suddenly find themselves single in the second half of their lives. They compare mental health levels of those experiencing gray divorce to those who have been widowed, and those who are still married. Further, they analyze the effect of remarrying on mental health outcomes and the general rate of recovery from the loss of a partner, whether through death or divorce.

Using a longitudinal dataset of individuals born before 1960 in the United States, they found those who got divorced reported experiencing the highest levels of depression symptoms, even more than those who were widowed. However, the authors found that gray divorce was less detrimental to mental health than losing a spouse. Recovery from depressive symptoms took half as long for gray divorcees as it did for widows. This could be because those who got divorced were three times more likely to get remarried than those who were widowed. Remarrying, in general, offsets negative mental health impacts for both the widowed and gray divorcees. This research offers a clearer picture of the psychological impacts of late-in-life singleness, particularly for those who are navigating divorce as it becomes more common.

The article is very easy to understand, detailed and meticulous! I had a lot of harvest after watching this article from you! I find it interesting, your article gave me a new perspective! I have read many other articles on the same topic, but your article convinced me!