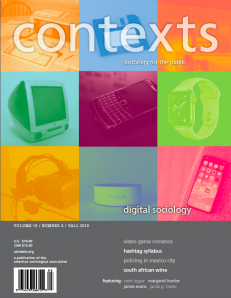 Cell phones are only one example of the digitalization of social life. These days, computers are cheap, small, and easy to program; they permeate our lives and transform our relationships. Consider dating. Decades ago, single people faced serious obstacles. Who’s available for a romantic relationship in town? How would you meet them? How would you know if you were compatible? Now, we have websites like eHarmony and apps like Tinder. In addition, some digital innovations have created new forms of interaction, like social media. This issue of Contexts explores the brave new world of our digital society.
Download this issue
Previous Next

Love Me Tinder, Love Me Sweet

Are “hookup” apps leading, ironically, to a revival of dating culture on college campuses? In our forthcoming book with Ken-Hou Lin on online dating, Through … Read More

All the Single Oldies?

Looking for love later in life is stressful and can lead to negative mental health outcomes. The divorce rate among people over fifty has doubled … Read More

Whose Time is it? Whites’ Time

Do we all have the same twenty-four hours in a day? In Sociology of Race & Ethnicity, Rahsaan Mahadeo enters uncharted new territory in critical … Read More

June goes into detail about how Mordin broke her heart. She reminisces about the surprise and shock that she felt when he told her that … Read More

Anti-Trump protests have united movements, bringing organizations who are focused on a range of different issues together for protests. This unity sets today’s resistance apart … Read More

What is the process by which boys learn to believe that they are smarter than girls? How does this unravel in schools? In the American … Read More

Letter from the Editors, Fall 2019

When Star Trek debuted in 1966, the 23rd century space explorers used all kinds of magical gadgets. One of these magical inventions was called a … Read More

Stereotypes can have real world consequences, such as affecting members of a marginalized group’s chances of getting hired for a job. Stopping stereotypes at their … Read More