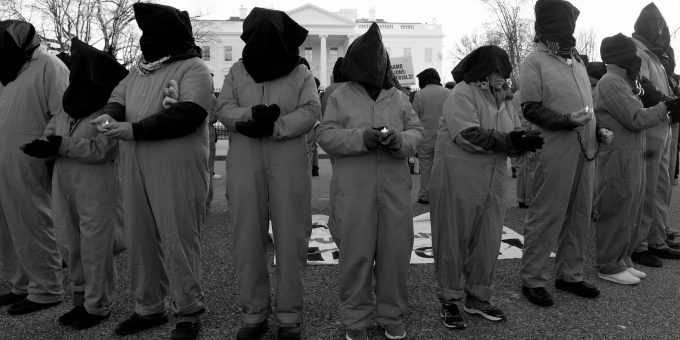 Protest in front of the White House on the 17th anniversary of Guantanamo Bay, 1/11/19. Victoria Pickering, Flickr CC

Anti-Trump protests have united movements, bringing organizations who are focused on a range of different issues together for protests. This unity sets today’s resistance apart from other social movements that, in general, were often organized around one issue— however, throughout history, we have seen this trend before. For example, in the 1980s, the women’s movement became increasingly aligned with the peace movement. Looking at these patterns, Wang and colleagues ask: when do social movement organizations cross their boundaries to adopt the message of other movements? Using data from over 23,000 U.S. protest events between 1960 and 1995, the authors seek to understand why movement organizations diversify their claims and issues.

Wang and colleagues find the diverse claims of social movements can be explained through the cohesion and focus of the movement. Cohesion is demonstrated by the connection between a movement’s message and its issues. When the meaning and the messaging align, the more cohesive the movement appears. Movements are more focused when they concentrate on one claim or a few clearly related claims. By tracking year to year changes in the focus and cohesion of movement organizations, they find that movements having high levels of cohesion and focus are less likely to diversify. Cohesion and focus signal legitimacy in the public sphere. Movements risk losing legitimacy if they diversify their claims outside of their existing focus.

When movements do diversify their claims, they are likely to adopt issues from other movements that have higher levels of cohesion and focus. For example, as the women’s movement lost cohesion in the 1980s, women’s organizations became increasingly aligned with the peace movement. They realized that diversifying towards a more cohesive movement would attract more resources and attention to their base. It may be beneficial for today’s movements to reevaluate their cohesion and focus in an attempt to build a stronger base.