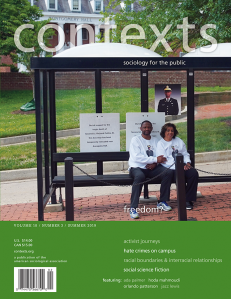 The articles in this issue grapple with the tenuousness of freedom. Income and political ideology, along with race, inflect our views about freedom, privacy, and the state of democracy.
Download this issue
Previous Next

A Love That Does Justice

On Easter Sunday 2017, Spiritus Christi Catholic Church in Rochester, New York sponsored a diverse team of parishioners who hardly knew each other to travel … Read More

Managing our own feelings and those of others—which scholars call “emotional labor”—on the job and off, it’s something we all have to do. Research has … Read More

In Sociology of Race and Ethnicity, Dwanna L. McKay explores the “real Indian” trope that polices American Indians. This trope of legitimacy stems from … Read More

Affirmative action, a remedy policy for past racial discrimination, is a highly controversial political issue in the United States. Those who support affirmative action see … Read More

Do diverse neighborhoods remain diverse, or are they simply transitioning? In recent years, researchers have used neighborhood diversity as a measure of progress toward racial … Read More

How should couples share their income? Couples with greater relationship investments (e.g., having children together, being legally married) are expected to prioritize their families’ needs … Read More

The Baltimore uprisings following the murder of Freddie Gray in 2015 were fueled by systemic abuse and neglect of poor Black communities. They captured the … Read More

Do you have to speak Spanish to be Latinx? In Social Problems, Lorena Garcia explains how middle-class adult children of Latinx immigrants use Spanish … Read More

To Hire or Not to Hire?

Several studies show that decisions about who to hire contribute to occupational gender segregation. But what about the decision not to hire? In American … Read More