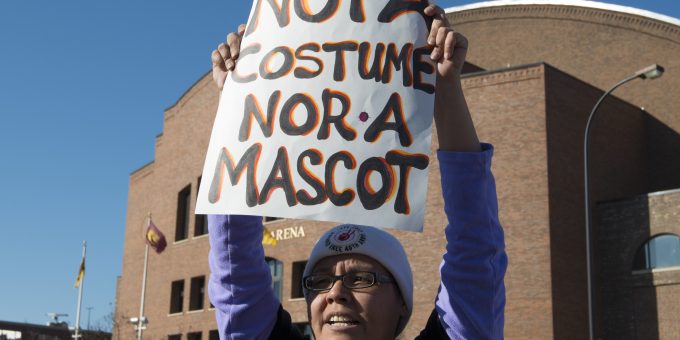 Protestors greet the arrival of the Washington football team in Minneapolis, MN in 2014, where speakers included the city's mayor and congressional representatives. Fibonacci Blue, Flickr CC

In Sociology of Race and Ethnicity, Cynthia Pelak challenges current sociological practices of teaching about settler-colonial racism. Settler-colonial racism is the social formation in which settlers steal Indigenous peoples’ land, eliminate their culture, and force assimilation to create and maintain a new nation-state. Highlighting American Indian sports mascots and American children “playing Indian,” Pelak shows how settler-colonialism dehumanizes people in the United States as racial “others.” She also explains the need for sociologists to debunk narratives that frame American Indians as a racial minority group seeking assimilation in a multicultural country.

Emphasizing the importance of critical reflection, Pelak describes the process for unlearning problematic narratives about American Indians. She uses the phrase “moves to innocence” to describe non-Native people’s attempts to distance themselves from responsibility in the White supremacist domination of Indigenous people.

In an active-learning writing assignment, Pelak asked students to write a letter to the owner of the Washington, D.C. National Football League team. The mascot, which she calls the “R word,” is a derogatory slur for American Indians. Students argued to drop or keep the racist team name and logo. In her content analysis of students’ responses, she found that a majority argued for dropping the team name. However, students on both sides employed a rhetoric of honoring and an imperial/colonial frame to address settler-colonial racism. These disguised racialized discourse about American Indian stereotypes. Students used “moves to innocence” to assume a moral position, subsequently elevating Whiteness and normalizing settler-colonial violence.

By extending race-based theories to include a decolonial perspective, Pelak argues that sociologists can better identify the state as a perpetrator of land colonization and violent domination of Indigenous people. Placing “land” at the center of the sociological analysis of racism engages with work of American Indian scholars who have always acknowledged land. In order to decolonize settler-colonial racism, we must unlearn assumptions, rethink the settler-colonial state, and center Indigenous voices.