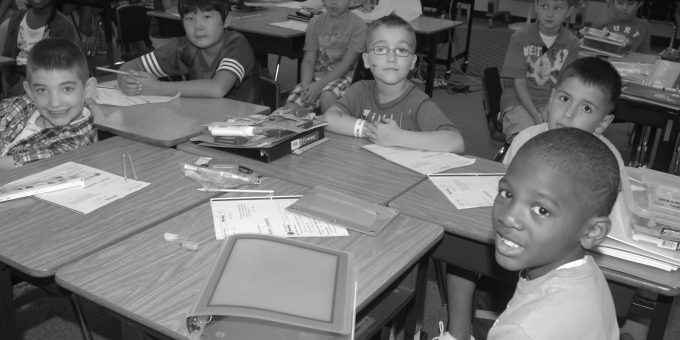 Summer vacation has come to a close and Humphreys American School (HAS) welcomed children back. USAG-Humphreys, Flickr CC

What is the process by which boys learn to believe that they are smarter than girls? How does this unravel in schools? In the American Journal of Sociology, Michela Musto examines this process. She finds that the different ways educators handle student behavior, especially by breaking the rules, shapes boys’ perceptions of intelligence.

Musto spent more than two years at a high performing, racially and economically diverse, suburban middle school in the Los Angeles area. Observation-based and interview data for the study was collected over a two-year period. While Asian-American, Latinx, and White students each represented at least 25% of the school population, Black and multiracial students represented well less than 10% each. In terms of class, Asian-American and White students tended to come from more affluent families, while Latinx students were more likely to be from working-class or poor families. White and Asian-American students were found to be overrepresented in higher-level or honors classes.

When looking at how often students raised their hands or if they waited to be called on, Musto found that White boys monopolized conversations and interrupted their female classmates more than other groups. She also found that educators were more tolerant of the behavior of White boys in higher-level classes. Conversely, students in lower-level classes, which disproportionately included poor Latino boys, were more likely to be reprimanded. This differential level of punishment caused Latino boys to disassociate and disengage from the classroom. Thus, Latino boys were characterized as “bad,” while their White peers were seen as brilliant. By 8th grade, White boys were perceived as more exceptional than girls in higher-level classes. Meanwhile, in the lower-level classes, students saw girls as smarter than boys, but not exceptional. This study has major implications on the perception of intelligence over the life course as it relates to race and gender.