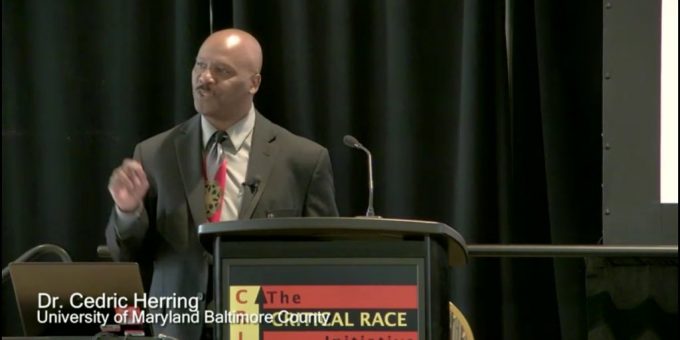 It is indeed an honor and privilege to write this tribute for our dear friend, colleague, and longtime research collaborator, Dr. Cedric Herring.

Herring was Professor and Director of the Language, Literacy, and Culture PhD Program at the University of Maryland-Baltimore County. He was also a Faculty Affiliate of Sociology and Public Policy and a Hrabowski Innovation Fellow. Previously, he was Professor of Sociology and Public Policy at the University of Illinois-Chicago, where he served as the Founding Director of the Institute for Research on Race and Public Policy. Herring was an exceptionally prolific scholar. Accumulating more than 2,500 citations, he published 9 books and 85 scholarly articles in journals including American Sociological Review, American Journal of Sociology, Social Problems, and the Du Bois Review. Herring was a visible and dynamic professional who was thoroughly involved in the discipline. He was elected to serve as the 20th President of the ABS and served as editor and associate editor of the journals Policy Forum and Social Problems, respectively.

Cedric was the consummate public intellectual: He offered expert witness testimony in discrimination cases, contributed to amicus briefs before the U.S. Supreme Court, wrote editorial and opinion pieces on voting rights and equal access, testified before legislative bodies, served on policy commissions, and briefed governors and legislators. He worked with the Transatlantic Commission on Race, Ethnicity, Immigration, and Citizenship and the European Union to convene scholars, policymakers, leaders of civil society organizations, and members of the media to combat racism and xenophobia in the United States, Europe, Canada, and Africa. In his wide-ranging work, he compared affirmative action policies and diversity initiatives in South Africa and the United States (funded by the Ford Foundation) and was co-principle investigator for both an alternatives-to-sentencing for youth offenders project (funded by the Illinois Criminal Justice Information Authority), and a study that sought to identify effective workplace interventions for combating racial and gender bias (funded by the National Science Foundation). As an academic, he published his results in scholarly outlets, but he went so much further to share what he learned in community forums, at press conferences, in the media, with community groups, before legislators and other policymakers, and even before the Secretary General of the United Nations.

One of Herring’s primary contributions to the sociology of race and ethnicity is his research on skin tone and colorism. Among the first scholars of the 21st century to document the relationship between skin tone and various indicators of upward mobility, Herring was able to demonstrate that light-skinned minorities are generally more likely to have higher status than their darker-skinned counterparts, and that the relationship was different across race, gender, and age. Among his ground-breaking findings, Herring showed that, among Black women, lighter skin tones were associated with earlier marriage and, among Asian men, middle-toned men had higher lifetime earnings than either their lighter- or darker-skinned peers. Prior to Herring’s pivotal work, the complexity of the relationships between skin tone, socioeconomic status, and social mobility had been undocumented.

At the time of his death, Herring had started a new line of research on race and wealth in the Baltimore area. One clear direction of this work was examining how race transcends social class relative to the likelihood of certain police encounters, such as traffic stops, arrests, and incarceration. Preliminary results tend to support the argument that upper-class Blacks are more likely to be stopped by police and/or incarcerated than upper-class Whites, but just as likely to be stopped and/or arrested as their Black working- and lower-class counterparts. We are committed to continuing Professor Herring’s work in this area over the coming decade.

We would be remiss if we did not close on a more personal note: Perhaps his most cherished quality, compassion was Dr. Cedric Herring’s polestar. He was always willing to help his colleagues, mentor students, and work toward justice. Cedric was a very warm and wonderful person as well as a peerless scholar. He will be missed for decades to come.

Hayward Derrick Horton is in the department of sociology at the University at Albany-SUNY. He co-authored Color-Struck: How Race and Complexion Matter in the Color-Blind Era, with Herring and other colleagues. Loren Henderson is in the department of sociology, anthropology, and health administration and policy at the University of Maryland-Baltimore County. She and Herring were frequent collaborators and true partners, within and beyond academia.

Hayward Derrick Horton is in the department of sociology at the University at Albany-SUNY. He co-authored Color-Struck: How Race and Complexion Matter in the Color-Blind Era, with Herring and other colleagues. Loren Henderson is in the department of sociology, anthropology, and health administration and policy at the University of Maryland-Baltimore County. She and Herring were frequent collaborators and true partners, within and beyond academia.