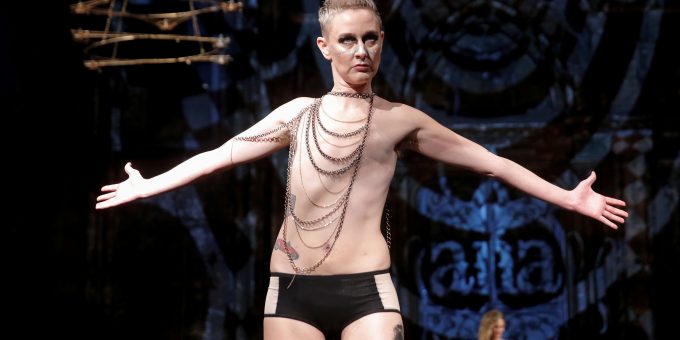 In recent years, dozens of breastless women have appeared, topless and proud in major publications, including People, Cosmopolitan, The New York Times, CNN, Glamour Magazine, The Oprah Magazine, and Huffington Post. Thousands of other women who had cancer-related mastectomies have shared their photos in online forums like Flat and Fabulous, Flattopper Pride, and Bold and Breastless, as well as topless images and narratives for personal interest stories, art exhibits, commercial advertisements, tattoo promotions, and lingerie shows. In my ongoing research on gender, sexuality, and body image, I call these women “flat rebels.” They resist post-mastectomy medical protocols presuming women will either wear prosthetics or undergo breast reconstruction surgeries. They denounce the presumption that women need breasts to feel whole, while asserting new claims about femininity and sexuality and offering fresh representations of how women can (and do) look.

Bold images of confident, sexy, breastless women, set alongside their self-assured personal narratives, radically open up possibilities for what can be considered a desirable female body. Vonn Jensen, who identifies as non-binary and queer, created the online forum Flattopper Pride after developing metastatic breast cancer and having a double mastectomy at age 31. Jensen’s efforts are aimed at “getting pictures out there that were true to life, that were gorgeous and showing [a body like mine] is a body type and a surgical option that is healthy, valuable and viable.” Jensen successfully spearheaded a 2013 campaign to pressure Facebook to stop forcing the removal of post-mastectomy images. In a 2017 interview, Jensen said, “Most people have this sometimes almost violent reaction to seeing a breastless body. It’s like it offends their sense of order in the world.”

The growing visibility of breastless women is part of a nascent radical body acceptance sub-movement, and their stories contain powerful narratives around gender, sexuality, and body image. Sociologist Judith Lorber’s research has shown that the social construction of gendered bodies comes through social practices which delineate what is male from what is female. Most of us voluntarily accept those expectations, derive a sense of worth and identity from them, and go to extremes to ensure that our bodies conform to them. To present oneself as a woman without breasts breaks a vital binary distinction between women and men. In my research on this topic, I see linkages between the demands made by flat rebels for visibility and acceptance and those of other movements such as the fat acceptance and trans movements. Like other movements, visibility is dependent on media representation.

High-profile and sustained work by feminist health activists and a variety of foundations have successfully raised the profile of breast cancer and helpfully destigmatized the discussion around detection and treatment. The goal is, obviously, to save the lives of women. Mastectomies are a powerful tool in the treatment of breast cancer, but the representation rarely normalizes the outcome: flat women. Instead, reconstructed breasts are promoted as healthy, valuable, and normal in promotional breast cancer material, and plastic surgeons are an expected part of a breast cancer health care team. The American Society of Plastic Surgeons and the Plastic Surgery Foundation organize “Breast Reconstruction Awareness” campaigns aggressively promoting reconstruction, so a woman will “feel whole again,” and “recover her femininity and sense of herself as a woman.” Perhaps the best example of the media’s celebration of post-mastectomy breast reconstruction is the extensive coverage of Angelina Jolie’s 2013 preventive bilateral mastectomy. Jolie’s story was often accompanied by images highlighting her surgically reconstructed breasts. As US Weekly lauded Jolie’s ability to still “rock a low-cut camisole like no one else,” it became clear that the framing of Jolie’s story was not only about the genetic mutation she carries and her surgical decision to prevent cancer, but also about her identity, sexuality, and femininity. She reassured readers that, with re-constructed breasts, her children wouldn’t see anything to “make them feel uncomfortable,” and she still “feels feminine.” The mainstream media was uncritical of the assumption undergirding these statements: women without breasts are scary and not real women.

Putting Their Bodies on Display

Flat rebels take aim at these assumptions and, in so doing, expand the culturally available meanings of womanhood, femininity, and beauty. They do so by “putting their bodies on display,” a strategy Maxine Craig writes about in her book, Ain’t I a Beauty Queen: Black Women, Beauty, and Politics of Race. Like Black women’s efforts to embrace qualities deemed unattractive by Eurocentric mainstream standards, flat-chested women flaunt their non-conforming bodies and seek to redefine beauty standards.

A non-profit organization called Flat and Fabulous has a closed Facebook group that began in 2013 and now boasts over 5,000 members. The organization explains its purpose: “In a culture that so often defines feminine beauty by a woman’s breast size, women who have made this choice feel robbed of their femininity and isolated.” Aiding visibility, a small number of flat rebels are also celebrities. Actor Kathy Bates had a mastectomy in 2012 and recently “came out” as flat. Writer, actor, and comedian Tig Notaro has appeared topless and breastless on stage and on screen. Notaro emphasized her tactics as educational: “Make no mistake. This is a stunt. It’s a stunt to get people talking about cancer and their bodies.”

Mainstream media publications are starting to accept and even promote “going flat.” In October 2016, The New York Times printed “’Going Flat’ after Breast Cancer,” which featured artistic renderings of five breastless women shown naked from the waist up. In a short video featured alongside the article, the women said the choice to go flat did not strip them of their femininity. One woman passionately recounted the pain of being pointed at in public and made to feel like a “circus freak,” due to her lack of breasts: “All you have to do is watch TV or look at a magazine or go to the movies… Every woman you see has two breasts. There’s the pressure right there.” Another woman, Debra Bowers, reminded viewers: “I am me. I have the same brain. I have the same attitude. I have all these things that made me a woman. And so, I wear my flat chest proudly.”

Shandia McFadden-Sabari, founder of Bold and Breastless, Inc., has said, “[If a] mastectomy is necessary, it’s okay to have reconstructive surgery or wear prosthesis. However, it’s also okay to be breast-less too!” Yet, other flat rebels are more sharply critical of reconstructive surgery and emphasize its downsides. Samantha Paige, a “cancer previvor” (a person who has a high risk of cancer without having had the disease) who posed flat and topless for an Equinox Gym ad, is the founder of the documentary project, Last Cut Project. Paige, topless in a StyleLikeU and Allure “Dispelling Beauty Myths” video, described her own discomfort with implants after her preventive double mastectomy: “I know I wasn’t cognizant of how uncomfortable I was, but I detached from [my chest].” Now flat, she shares, “This is how I’m meant to be.” In a society that frames women as sexual objects, breast implants literally turn a woman’s body into an object of pleasure for others, rather than herself, as activist Jean Kilbourne notes in her film Killing Us Softly. Furthermore, Vonn Jensen has spoken about the medical dishonesty surrounding reconstructive surgery as a distinct form of violence: “People are not often told that they are likely to have multiple surgeries, which is often the case.” A longitudinal study of 2,343 women published by JAMA Surgery in June of 2018 showed that within two years of reconstructive breast surgery, one-third experienced complications, a rate the authors describe as “impressively high,” including 9.8% who suffered wound infections and 19% requiring reoperation. Marianne DuQuette Cuozzo, one of the women featured in the New York Times article referenced above, experienced four infections in five months and argued reconstruction was “worse than the cancer.” Flat rebels model an alternative path, which can inspire other women to reject medically unnecessary surgeries, thus minimizing the trauma of breast cancer.

New narratives are reminiscent of earlier critiques by radical Black feminist Audre Lorde. In her 1980 memoir, Cancer Journals, she wrote that, when women are seen as “decoration and externally defined sex objects,” breast cancer becomes a “cosmetic problem” instead of a life-threatening disease. After having one breast removed, Lorde refused to wear a prosthetic, considering it to be depoliticizing and a type of silencing. Contrary to Lorde’s hope that “an army of one-breasted women would descend the steps of Congress,” demanding research on the causes of breast cancer, the bulk of the current debate is limited to body image, cultural representation, and medical bias toward reconstruction at the expense of comfort and health. Flat activist Paulette Leaphart has fought back by linking health inequality to economic injustice. She walked topless and breastless from her hometown of Biloxi, Mississippi, to Washington, D.C. in 2016 to raise awareness about the costs of breast cancer for poor women, and was even featured in Beyoncé’s video album, Lemonade. Although Leaphart and some other flat rebels are raising questions about economic injustice and the appropriate uses of breast cancer research money, the political implications of these debates are often muted. This may be especially problematic in a time when women’s health and bodily autonomy are being undermined through state laws and federal defunding of Planned Parenthood.

By sharing their experiences and decision-making processes, flat rebels help raise awareness about the risks and discomforts of breast reconstruction. Flat rebels reject the association between artificially constructed breasts and sexuality, femininity, and wholeness—pushing back against the dominant expectation of hiding the results of breast cancer behind prosthetics or silicone. Instead, flat rebels have chosen to put their chests and their choices on full display.

Julie Whitaker is in the social science department at Edgewood College in Madison, WI. Her current research focuses on sociological storytelling.

There are many factual errors in this article. Firstly, I am not a woman. Using my photo as click bait without even reaching out to fact check with me is irresponsible and damaging. After a long day of defending my transgender 7 year old, I now have to face defending myself? A child can see as clearly as me the salient issue: when a person tells you who they are, it is wrong to assert they are anything else.

Julie Whitaker is in the social science department at Edgewood College in Madison, WI. Her current research focuses on sociological storytelling.