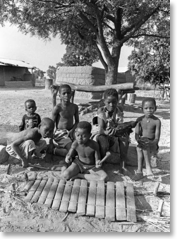 The gyil is a 14-key frame xylophone played during funerals by the Lobi people from Ghana’s northwestern region. Gyil music combines overlapping melodies and bass patterns enveloped by a dense layer of buzzing. The keys are cut from the liga, a red hardwood tree, and strung above gourds that are modified with thin paper or spider silk to create a sympathetic drone. Playing the instrument with the two heavy mallets takes great endurance, and a musician may be expected to play for several hours before another takes over.

Mourning and celebrating reafﬁrm to the participants that their lives will be honored in the same way. Photographing this topic led me to appreciate the difficulty of describing something as complex as music in the service of social celebrations. The photos show how the gyil is a means to socialize the young into eventual roles as respected musicians as well as a means to create social space. Most importantly, we see the power of musical performance to articulate collective mourning and the celebration of life.

In addition to photographs, Colter Harper made audio recordings of the funeral music in Ghana. Colter agreed to give us a quick audio tour to accompany his photo essay in the print magazine. To listen, just click the “+” icon for each clip.

These clips were all recorded near the village of Kalba in the Upper West Region of Ghana. The funeral took place in the courtyard and the adjacent fields.

In this first clip, Lobi villagers sit and talk as musicians play and a group of older women seated near the body wail. At the beginning, you can hear the xylophone (gyil), drum (gangar), and bell playing. The musicians finish the piece allowing the listener to focus on the overlapping of conversations and the “wailing” songs of mourners:

This clip features a Lobi ensemble (xylophone, drums, and bell) in the midst of a performance. Faint wailing can be heard in the background:

This clip features a Lobi ensemble (xylophone, drums, and bell) in the midst of a performance. This is the first night of the funeral and a great crowd has assembled. The only light comes from small fires and the moon. Men drink and converse as teens take turns dancing in a long circle around the musicians:

This clip features the sounds of the ground xylophone. This instrument is built over a trough in the earth in the courtyard of the family compound. Because the frame xylophone can only be played in the event of a funeral, the ground xylophone provides a medium for practice and entertainment:

This clip features the xylophone (gyil) master Thomas Vuurl playing one summer night in his home near Kalbaa. The sounds of the instrument reverberate in the small chamber of the mud built compound. Bats fly through the dark rooms eating mosquitos as the extended family crowds in to hear the old master:

Several young boys sing in the courtyard of their family compound near Kalba. It is December with the dry season underway. The night is cool and dry and a thin haze covers the stars:

The music clips are a great supplement to the photo article. However I wished the wailing could be heard better. As a child growing up in Ethiopia, many, many times I heard (mostly women) wailing of the dead and it was much more of a painful sound.

It would have been helpful to have a comparative comment on music in funerals. I would suggest that the author or others be invited to add that on the web or in future issues. How unique are the Ghana instrumentations and rituals?

To the webmaster: the MP3s worked really well! It would be helpful to have the length of the sound clip in the descriptions.