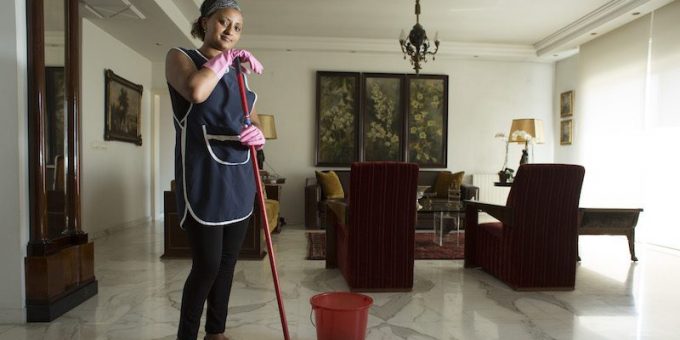 Domestic employment requires a unique physical proximity of bodies from different social classes, and often from different racial and ethnic backgrounds. People who might not otherwise come into contact with each other do so as domestic workers serve food, change diapers, and literally handle families’ dirty laundry. Yet workers and employers—intensely aware of each other’s bodies—find ways to manage this situation. They maintain distance by behaving in ways largely seen as appropriate to their status. So, despite the physical closeness, these strategies reproduce class hierarchies among people, resulting in embodied inequality. Embodied inequality in Roma appears as matter-of-fact, with no indication of if or how director Alfonso Cuarón wants us to interpret it. Inequality is clearly written on bodies in this film, yet viewers might not walk out of the film thinking this is outrageous and immoral.

Embodied inequality in Roma appears as matter-of-fact, with no indication of if or how director Alfonso Cuarón wants us to interpret it.

Social class boundaries in Latin America are more rigid than in the U.S., with some people feeling born to serve and others feeling born to command. In Latin America, most employers of domestic workers were raised with—or by—household employees, socialized from young ages to order around women who are poorer and more vulnerable. Yet domestic work everywhere involves embodied class distinctions. How many domestic workers, nannies, or caregivers sit down to eat dinner with the family for which they work, without having to feed someone else? How many people whose main job is cleaning feel entitled to sit on the sofa which they vacuum around, or recline on the pillows they fluff? How often do employers and workers share tight spaces or touch, aside from too-frequent episodes of sexual harassment?

Bodies carry different amounts of social worth, and this fact is not hidden in Roma. The distinctions between bodies from different classes and racial groups become apparent when Cleo, the indigenous domestic worker who is the main character, wipes off the mouthpiece of the telephone before handing it to her employer. This simple gesture, on which Cuarón does not linger, and many moviegoers may have missed, emerges within a system that discourages even indirect bodily contact across class lines. In this system, it is obvious that the employer’s breath and skin should not commingle with Cleo’s. The employers don’t need to tell Cleo to do this: she has internalized social messages about her body as less-than, as a contaminant in the upper-middle-class spaces that she works to keep pristine. The borders between rich and poor bodies are only porous when it comes to the children, who touch and caress Cleo and who receive physical comfort from her at bedtime. The borders separating adults’ bodies, however, are firm breaking only momentarily in the film’s seaside climax when Cleo saves the drowning children’s lives, and employer Sofía embraces her and the children as they huddle together on the sandy beach.

Eating is a social practice that can differentiate between bodies of greater and lesser value, as evident in domestic work research and realistic films like Roma. Most domestic workers like Cleo, and other permanent or temporary household employees—drivers or handymen, for instance—eat in the kitchen or patio rather than in the dining room with employers. Despite being called “part of the family” and being “live-in,” domestic workers are usually excluded from family dinner. It is ironic that employers draw the line at eating together, as domestic workers have touched everything on their plates. It is easier to forget that polluted act of touching, though, if the worker is not visible when you pick up your fork. Like the somewhat-unconscious gesture of cleaning the phone, this separate eating is unremarkable to people who grow up seeing it as normal.

When, in Roma, the family takes a trip, however, we see Cleo eat with her employer and the children in a restaurant. This break with the norm makes sense. First, the employer, Sofía, has convinced Cleo that the trip is a vacation from her domestic duties (which is not true; she still has to care for the children). During vacations, people may relax or reject normal routines and rules of social interaction, but such exceptions reify norms. The chances are slim that someone from back home will see Sofía eating with Cleo, since they are out of town. Second, the class distinctions that keep Cleo in the kitchen at home present logistical problems in a public restaurant space. Cleo sitting at a separate table would make visible the barriers that are less visible in the home. If the restaurant does not usually serve indigenous or low-income customers, Cleo could receive poor treatment without the protection of her employer. In this atypical setting, the employer can (temporarily) see herself as magnanimous and egalitarian by eating with Cleo.

When Cleo later goes to the hospital, if she did not have what participants in my research on domestic work would describe as “good” employers, she would be among the many poor and indigenous women writhing in pain inside and outside the building. The tableau of suffering that Cuarón paints in this scene is stark. Cleo’s attachment to a well-off family means that her body receives a better level of care and attention. Her employers are portrayed as saviors who pull her up out of potential misery. Still, the outcome is catastrophic, and her baby is stillborn.

Why? Possible explanations lie in the different experiences of differently-classed bodies. The hard physical labor of cleaning, cooking, and laundry may have endangered the fetus. The accumulated toll over time, or lack of access to healthcare as a poor, indigenous woman from the countryside may have been to blame. In any case, despite receiving care that is superior to that offered to other women in her situation, those who do not have ties to the wealthy and influential, Cleo’s body experiences a negative outcome. And her baby’s body is quickly taken away from her, against her wishes.

Embodied inequality in Roma means devaluing bodies both in private and in public. Bodies of indigenous women working in private homes are portrayed in Romaas potentially polluting because of their otherness—they are poor, rural, brown-skinned, and trained to obey. These abject identities and positions strip women’s bodies of value, to the point where they erase their physical presence through gestures (wiping off the phone, standing while others sit) and separation (eating in the kitchen). As we see in the film, employers do not dictate these strategies and so are symbolically released from the responsibility of oppressing their workers; they are just behaving as others do, even displaying a bit more kindness than their neighbors. Because of socialization into widely-accepted ideas about domestic workers’ bodies as worthless and dirty, workers take these actions themselves. Poor people’s bodies are stigmatized in the larger social world, as we see in the hospital courtyard where bodies deemed worthless suffer immense pain. Discrimination in healthcare emerges from assumptions about poor or nonwhite bodies—as impervious to pain, or hopelessly damaged—even as it perpetuates their poorer health status.

Yet because of Cuarón’s light touch and decision not to explicitly teach or preach, the film does not really challenge embodied inequality. Rather than becoming motivated to resist social hierarchies, or value domestic workers’ bodily well-being, some viewers might just think, “how sad” or pat themselves on the back for being slightly more generous employers. Those who have been demeaned in systems of embodied inequality, however, may recognize what it feels like to have a body like Cleo’s.

Erynn Masi de Casanova is a professor of sociology at the University of Cincinnati and author of the recent book Dust and Dignity: Domestic Employment in Contemporary Ecuador.She is also the Founder of RITHAL (Network of Researchers of Domestic Work in Latin America).

Erynn Masi de Casanova is a professor of sociology at the University of Cincinnati and author of the recent book Dust and Dignity: Domestic Employment in Contemporary Ecuador.She is also the Founder of RITHAL (Network of Researchers of Domestic Work in Latin America).