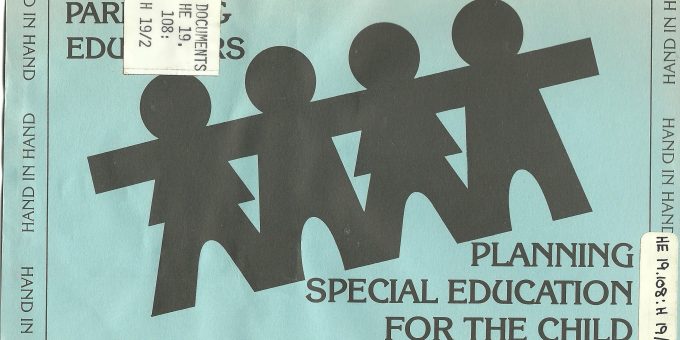 In 1968, special education scholar Lloyd Dunn argued that African American and other racial or ethnic minority group students were overrepresented in the U.S. special education system. In the 50 years since, the inclusion of a higher share of minority than White students in special education programs has largely been attributed to systemic bias in the identification of disabilities in U.S. schoolchildren, including institutionalized racism and purposeful segregation by teachers and other school personnel. In 2012, Jamila Codrington and Halford H. Fairchild of the Association of Black Psychologists further charged that this minority overrepresentation was part of the “school-to-prison pipeline.” As African-American and other non-White parents are urged to refuse permission for schools to provide special education services for their children, the federal government has conducted civil rights investigations and instituted federal education legislation and regulations mandating that school districts report and address significant minority group overrepresentation in special education. The U.S. Department of Education (DoE) planned to expand compliance monitoring requirements, but recently delayed the effort, partially in response to empirical work we published with colleagues in 2010, 2015, and 2017. In these studies, we find that, among otherwise similar U.S. students, it is actually White students who are much more likely to be identified as having disabilities and to receive special education services.

Beliefs and Policies, Definitions and Measurement

Within individual school districts, these procedures are strongly influenced by a second set of policies operating at the national level. These policies have been created and implemented by the U.S. Congress and DoE, particularly with regard to special education over-placement of African-American and other minority group students. From the beginning, legislators and policy-makers have measured such disproportionality by simply comparing the percent of a minority group in special education to the percent of a comparison group’s (e.g., non-Hispanic Whites) share. The resulting ratio is called the racial risk ratio for special education, and a ratio over 1.0 is taken as evidence of minority overrepresentation. This ratio is typically reported without adjustment for the possibility that minority and White students may have different rates of clinical needs.

This is to say, local and national policies operate within a disability and special education ecology of knowledge in which individuals in Congress, the DoE, state and local educational administrators, teachers, researchers, policy analysts, and advocates are engaged in ongoing dialogue around disability-related issues and policies. Beginning in the 1970s, this conversation interpreted minority overrepresentation as clear indication of systemic bias, without accounting for differential disability prevalence rates resulting from differential exposure to poverty, and has been bolstered by the collection and analysis of data by the DoE’s Office of Civil Rights (OCR). As noted by a 2002 report from the National Research Council, however, this evidence has not properly accounted for possible explanatory factors for racial risk ratios beyond racism, including differential exposure to the risk factors for disabilities. As we documented with our colleagues in 2017 and 2018, prior studies have not used nationally representative student-level data to compare otherwise similar students of different race or ethnicity. Yet, in order to be valid, as described by sociologist Lincoln Quillian and coauthors in a 2017 summary of audit studies of employment discrimination, studies of racial discrimination must compare otherwise similar groups, differing only by race or ethnicity. 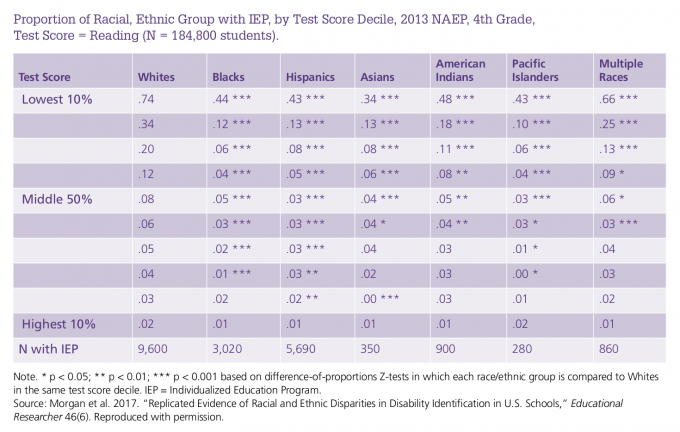 What Our Research Finds

When we undertook such analyses, we found that minority students were less likely to be identified as having disabilities than otherwise similar White students displaying similar clinical needs and attending the same schools. The table above displays an example of our findings, based on calculations from the National Assessment of Educational Progress (NAEP), data used by the National Center for Education Statistics to create “The Nation’s Report Card.”

Why is receipt of special education services so strongly related to achievement? Because special education services are only to be provided to students whose disabilities are adversely affecting their educational performance. Our analyses suggest that U.S. teachers and administrators have been closely following this guideline; most of the students receiving special education have reading and mathematics achievement far below the great majority of other students. Among those students with serious academic difficulties, White students are much more likely than minority group students to receive special education services designed to help them do better in school. We have replicated these findings across 36 nationally representative NAEP datasets going back to 2003, for separate categories of disability, for grades 4th, 8th, and 12th, and for contrasts between African-American and White males.

What Should Be Done?

On the one hand, we should want every student who is struggling due to a disability, regardless of race or ethnicity, to receive extra assistance, particularly when that assistance is free and integrated with the student’s classwork. On the other hand, advocates for policies to reduce the special education placement of minority students are concerned that being “labeled” as having disabilities is stigmatizing, particularly given long-standing bias against minority students in the United States. Extra assistance versus stigma—which is more important for special education students, including those who are racial/ethnic minorities?

Importantly, we do not know. Studies of the academic effectiveness of special education, including our own work and Eric A. Hanushek, John F. Kain, and Steven G. Rivkin’s 2002 findings, conflict. To our knowledge, no rigorous research has measured stigma and examined the extent to which special education is stigmatizing. Nor have scholars assessed the academic and social psychological consequences of such stigma, after accounting for the strong confound of experiencing academic difficulties on socio-emotional well-being. Without adequate research bases, we cannot formulate evidence-based policies that are actually helpful to students with disabilities.

Currently, the DoE is charged with regulating special education nationally. Its policy revisions have been delayed until 2020. Regarding these, we reassert that the Department’s methodology for identifying districts with particularly high rates of minority overrepresentation fails to account for differentials in clinical need, measured by White versus minority achievement gaps. For example, districts with large and growing Black-White income gaps, like the one the San Francisco Chronicle’s Joaquin Palomino documented in 2015, will likely show greater Black-White achievement gaps and a need for a higher Black-White risk ratio for special education services than would be the case in more economically equal districts. Under the DoE’s current methodology, districts with greater racial income gaps would be more likely to be publicly identified with significant disproportionality and forced to reallocate their special education funding. As has likely been the case for many years, school districts may be incentivized “not” to identify African-American and other racial/ethnic minority students as having disabilities requiring special education.

Is there a methodology to help make districts “otherwise similar” and avoid misattributing bias to disproportionality due to racial differences in clinical need? Yes, if we can adjust each district’s risk ratio for its racial achievement gap. In one study by Farkas and others that is currently under review, we undertook such a calculation. We used the Stanford Education Data Archive (SEDA, cepa.stanford.edu/seda/data-archive), which collected Black-White and Hispanic-White test score achievement gaps for several thousand districts. We merged these data with the DoE’s data on district racial risk ratios for special education. For these thousands of districts, we then regressed their risk ratios on their achievement gaps, finding a very well fitting regression line with a pronounced upward tilt. Districts with higher achievement gaps have higher risk ratios. Further, as district achievement gaps approached zero, their risk ratios approached 1.0 or lower, indicating no over-representation. On average, district risk ratios above 1.0 appear to simply reflect achievement gaps above 0. As in all regression analyses, each district has a residual, or deviation from the predicted regression line. These range from positive to negative numbers. Those districts with high positive or negative values of their residual might then be investigated as potentially over- or under-identifying minority students.

George Farkas is in the School of Education at the University of California–Irvine. He uses statistical analysis to study the school achievement gap for low income and ethnic minority students and interventions to reduce this gap.

Paul L. Morgan is in the College of Education at Pennsylvania State University. He studies the early risk factors for learning disabilities and the interventions that may help children experience greater academic success.

George Farkas is in the School of Education at the University of California–Irvine. He uses statistical analysis to study the school achievement gap for low income and ethnic minority students and interventions to reduce this gap.

Paul L. Morgan is in the College of Education at Pennsylvania State University. He studies the early risk factors for learning disabilities and the interventions that may help children experience greater academic success.