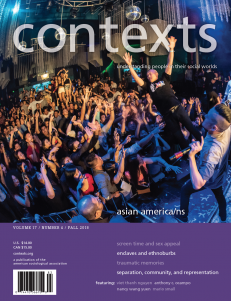 If we’ve learned anything, it’s that America is a rugged mountain, shaped by upheaval and endless waves of immigration. This issue of Contexts focuses on one diverse community that formed from immigration: Asian America. Its story is complicated, as seen in this guest edited issue.
Download this issue
Previous Next

“Will they or won’t they?” The popular question is situated in lay beliefs about romantic love and choice, but overlooks the structural hurdles people face … Read More

In 1968, special education scholar Lloyd Dunn argued that African American and other racial or ethnic minority group students were overrepresented in the U.S. special … Read More

What’s more valuable to you: agency or communion? In Social Psychology Quarterly, Kimmo Eriksson considers whether Democrats and Republicans answer this question differently. He … Read More

Incoming gentrifiers often appreciate the authenticity, grit, and diversity of their new neighborhoods. Many even acknowledge feeling guilty for contributing to gentrification, the process by … Read More

Japanese Village and Deer Park operated from 1967-74 as part of the growing Orange County, CA amusement corridor, anchored by Disneyland. “Deer Park,” as it … Read More

Undocumented Asians, Left in the Shadows

Undocumented Asian immigrants remain in the shadows. Neither researchers nor policymakers pay much attention to their unique experiences, instead focusing on undocumented Latinx and the … Read More

Harvesters of the White Desert

Abhaben’s shack, her home in the Rann of Kutch for eight months a year, is built of jute bags and plastic sheets. Partially shaded by … Read More

Manbeena is a 29-year-old physician who moved to the U.S. with her family as an infant and has lived there since. There is a lilting … Read More