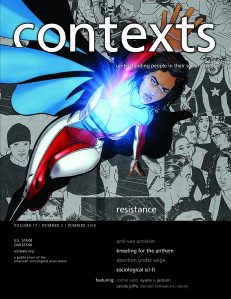 From Black Lives Matter to #MeToo and the March for Our Lives, Americans are protesting police killings, pressuring lawmakers to address gun control, holding abusers accountable for rape, assault, and sexual harassment, demanding an end to the separation of immigrant parents and children, and asserting their rights to bodily autonomy and equal pay for equal work. Yet these marches and mobilizations are not the whole of resistance. Many are quick to think of daily, incremental actions as nothing more than “slacktivism”, but challenging policing, education policy, abortion restrictions, and pay inequities has to start somewhere. This issue explores what we mean when we say, “Resist.”
Download this issue
Previous Next

Colin Kaepernick started one of the most visible protests for social justice in modern sports history. He gathered the attention of fans and non-fans alike, … Read More

What Does Homeownership Buy?

Regardless of racial or ethnic background, there is a strong American preference for home-owning over renting. While this is found to be true time and … Read More

That’s Not My Size

If you’re a woman, at some point you’ve probably wondered why your clothing size is completely different from brand to brand. Katelynn Bishop, Kjerstin Gruys, … Read More

Foraging on the Margins of the Labor Market

Finding a job is hard no matter who you are. But some people face more barriers to obtaining employment than others, including racial minorities and … Read More

Scholars of immigration and family have depicted the ways immigration enforcement policies affect Latinx children and families. Much attention has been paid to the long-term … Read More

Prison Tourism in the Era of Mass Incarceration

Nonviolent Protests and the Formation of Democracies

Can the barrel of a gun point the way to democracy? Some political scientists and sociologists seem to think so. Ali Kadivar challenges this convention … Read More

“You can’t tell a story like [the financial crisis] with realism. You need fantasy to explain it.” –Max Gladstone, author of The Craft Cycle … Read More

Students and University Growing Up Together