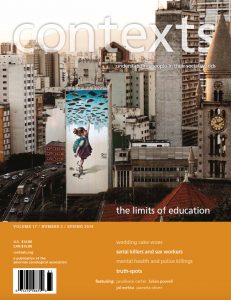 Education is a central feature of our lives. Collectively, our society invests billions of dollars in schools and colleges, with the hope that they act as transformative institutions that create a society of educated and productive citizens. But what if education doesn’t deliver on its promises? What if our educational institutions are poorly suited to the tasks we demand of them? In this issue, Prudence Carter explores how schooling might be mobilized in a world of relatively rigid racial and economic inequality. Karl Alexander, who has worked for decades in the sociology of education, discusses his involvement in Baltimore school reform efforts, including racial integration. Our back page piece, by Jal Mehta and Scott Davies, asks whether sociologists, in their concern about inequality, have neglected the institutional and political effects of education. And Jennifer Randles looks at a different kind of education: government funded programs aimed to “teach” men to be responsible fathers, and through which many of those fathers earn GEDs that help them access better jobs.
Download this issue
Previous Next

The “selfie” generation posts pictures of themselves, often aiming to boost their social media presence. For academics, selfies might also refer to self-citations, aimed to … Read More

Programs that encourage democracy in foreign countries have become controversial, in part because of problems in how they have been implemented. Sociological research has the … Read More

It’s hard to imagine a more traumatic experience than the unexpected death of a loved one. But imagination often becomes reality for Black Americans, who … Read More

Women represent about half of the students enrolled in doctoral programs, but they are largely under-represented in tenure-track professor positions at research universities. Possibly this … Read More

This Spring, an annual fashion trend will return to the campus of California State University–Long Beach. As the familiar sounds of “Pomp and Circumstance” carry … Read More