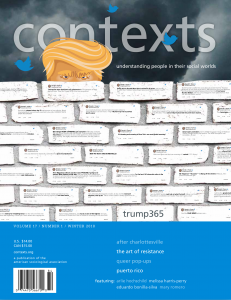 This issue showcases how Trump’s policies impact everyday life, from Trump’s impact on immigration to Affirmative Action on college campuses and social movements during the era of Trump. Also: how Trump has revitalized White nationalism and sociological responses to the White supremacy rally in Charlottesville and the Women’s March.
Download this issue
Previous Next

Imagine telling your family you hope that you or your child majors in philosophy. Feel the blank stare. Watch the slow head-nod. Researcher Natasha Quadlin … Read More

Jessica Cobb | One Thing I Know

The first-gen experience is all about precarity. As a first-gen college student and first-gen advocate, I know. Unlike our continuing-gen peers, first-gen students don’t necessarily … Read More

Although smoking rates have declined significantly in the United States over the past several decades, the Office of the Surgeon General noted in a 2014 … Read More

Last spring, one of us was talking with a heterosexual, African-American male friend who said he’d been surprised to learn that his niece, Amani, whom … Read More

In the U.S., 2017 ushered in a new presidential administration and a new era of protests. On January 20, approximately 160,000 people attended the inauguration … Read More

Why Clinton Lost, An Interview with Melissa Harris-Perry

Sociologist Hana Brown sat down with her Wake Forest University colleague, Melissa Harris-Perry, to discuss the 2016 Presidential election, life as a professor, and … Read More

“When Mexico sends its people, they’re not sending their best. They’re sending people that have lots of problems, and they’re bringing those problems with us. Read More

As activists, politicians, law enforcement, and everyday citizens seek ways to cut gun violence, it seems everyone wants to know: How do we make our … Read More

The Algorithmic Rise of the “Alt-Right”

On a late summer evening in 2017, members of the far-right descended on Charlottesville, Virginia with tiki-torches held up in defense of confederate general Robert … Read More