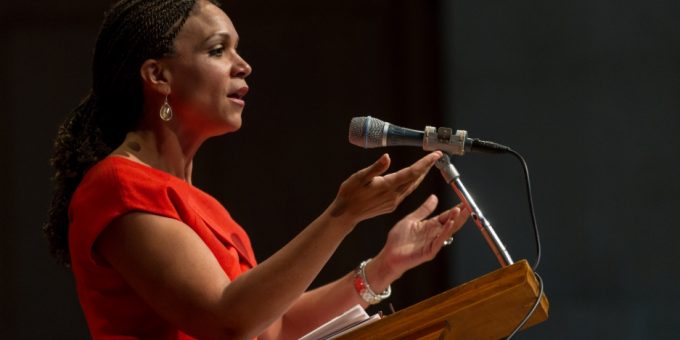 Why Clinton Lost, An Interview with Melissa Harris-Perry

Sociologist Hana Brown sat down with her Wake Forest University colleague, Melissa Harris-Perry, to discuss the 2016 Presidential election, life as a professor, and activism in the academy and beyond. Harris-Perry is Maya Angelou Presidential Chair in the department of politics and international affairs at WFU; founding director of the Anna Julia Cooper Center on Gender, Race, and Politics in the South; and an award-winning educator, author, activist, and journalist. Here are some of the highlights from their invigorating discussion.

Hana Brown (HB): You anticipated Trump’s election. You called it “terribly predictable.” What did you see that other people didn’t?

Melissa Harris-Perry (MHP): I long believed that Hillary Clinton was unable to win the presidency. She would have been a perfectly adequate president. I believed she could not be elected based on what we know about what it takes for a Democrat to win the Presidency. If we take the example of President Obama’s initial win in 2008 and his reelection in 2012, then we have an idea of the critical importance of Black voters—particularly Black women voters. The Democratic Party relies on Black voters not simply as supporters, it requires they turnout at stunning levels.

In 2008 and 2012 African American women’s voter turnout exceeded that of all other race and gender categories. Black women were voting at rates seen only in countries where it is mandatory to vote. Obama only won because Black women voters were engaging in an unsustainably high level of participation, fueled by their enthusiasm for his candidacy. By 2016, Pew reported a sharp decline in Black voter turnout—Black voter turnout declined for the first time in two decades, both in rate and raw numbers.

So, in 2016, Hillary Clinton got Black women voters, but they constituted a much smaller share of the overall electorate. Nearly every Black woman who voted, voted for Hillary, but instead of making up 9% of the population of voters, they dropped down to closer to 7%… That decline in participation is not solely about lacking an inspirational candidate. This was the first presidential election in 50 years without the full protections of the 1965 Voting Rights Act (VRA). After the Supreme Court decision in Shelby v. Holder gutted the VRA, all observers expected a decline in Democratic voter turnout. Civil rights organizations were aggressively battling it. But in all the primary and general election debates—and there were more than 20—not one moderator posed a question about the Voting Rights Act. The structural impediments imposed in key states that Clinton ultimately lost undoubtedly had an effect. Republicans have long understood that to win, they don’t necessarily have to compete for new votes—they simply need to depress turnout among reliable Democratic constituencies.

Finally, it was hard to understand why Democrats believed that labeling candidate Trump a “sexist” would somehow disqualify him in the minds of voters. I distinctly remember the victory laps they were prepared to run once the infamous Access Hollywood pussy-grabbing video became public. It was as if they believed there were no sexists, no harassers, and no sexual assaulters in the Democratic Party. What a strange assumption! Democrats are sexual harassers, assaulters, and rapists, too. In the Harvey Weinstein and #MeToo world in which we now live, I think it has become very clear that, while Mr. Trump may be more crass in his public comments, he is not entirely unique in his sexist actions.

HB: What is your response to people who say that White working-class voters swayed the election for Trump?

I believe the crucial question is really about the failure of the Democratic Party to understand what it did and continues to do wrong, relative to Black voters and Brown voters. One of the ironies of the 2016 election is Terry McAuliffe, Governor of Virginia, sitting there a week before the election trying to restore voting privileges to all of the ex-felons in Virginia. These are overwhelmingly Black voters disenfranchised for life in large part because of the aggressive crime policies enacted at both the federal and state level during the administration of Bill Clinton. How ironic that 25 years later those same policies built a firewall against his wife’s election. It was political performance art to watch a friend of Bill and Hillary’s trying to undo their public policy, which had the effect of shrinking the Democratic base because of how it disenfranchised Black and Brown men.

I don’t think [the Democratic Party has] any idea what’s happening, and it’s not as though the data aren’t there. White women voters have only voted in a majority for the Democratic candidate for president twice since 1960. Twice! How could it have been surprising to so many political insiders?

HB: We’ve seen the rise of movements like #BlackLivesMatter. We see undocumented and trans youth out on the ground organizing for social change. You’ve criticized the NAACP and lifted up some of these newer movements. What do you see as so promising about these groups?

MHP: BYP100—the Black Youth Project 100—has one of the best models. It’s self-consciously a cooperative model, which provides training and insight at the same time that it offers voices and opportunity to action. The model they use is leader-full instead of leaderless. I find that discourse useful and empowering. They make sure the young people who are engaged are writing, producing data, and building relationships. At the same time, they’re also on the ground and digitally doing work. They started in Chicago the night of the not guilty verdict in the murder trial of George Zimmerman for his killing of Trayvon Martin. Four years later, they’re in a dozen cities. They move deliberately, building capacity as they arrive. Their goal isn’t to be as big and as popular and as well known as possible, but rather to move with some purpose, so that people are actually getting to develop relationships.

New movements aren’t inoculated against many of the failures of the past. But they have innovated in important ways. They have largely jettisoned respectability politics and refuse to be constrained by narrow definitions of what a “good Negro” must be to earn full citizenship. And they are fully and self-consciously intersectional. These two important developments suggest they will leave no one behind as they move forward. I find that terribly exciting! They didn’t fix that people still love attention and are motivated by fame. They didn’t fix that people are still self-interested. They didn’t fix that some people get co-opted, and they didn’t fix that [activism] still takes an enormous emotional toll on the individuals. They haven’t won, because nobody’s winning yet. But, they have killed and buried respectability and they are determined that “everybody’s coming”—queer folks and trans folks and Brown folks and undocuBlacks. Everybody. Those are huge innovations.

HB: Some people see scholarship and activism as going hand in hand, and others argue that activism compromises objectivity. Could you share your position?

MHP: We’re all coming from a standpoint. We’re all writing, we’re all thinking, so there’s no question that we are activists. We’re activists because we are actively engaging the world and coming up with ideas and testing them.

Let’s take the debate on campuses about safe space versus free speech. My position is, on campus, I don’t believe any space should be safe for your brain. Your heart, soul, and spirit should be safe, but not your brain. You should be bombarded with new ideas at all times. But I acknowledge the smart argument made by my colleagues such as Libertarian economist Mike Munger of Duke University. He argues, “Well, this is just silly. Of course you should have safe spaces. Have you ever seen a department?” [laughing] The entire academy is basically a collection of safe spaces that are called disciplines and departments. We have rules and don’t let the others who operate by other intellectual rules disrupt us. I see value in both of these positions and see both as activists’ positions!

We’re asking our students for free expression of ideas, but we don’t engage in free exchange of ideas. You start free exchanging ideas, you are not getting tenure, honey! I [read Munger’s piece and] had to laugh. The danger in saying we shouldn’t engage in activism is this: people are defining the word activism in a very particular way. Universities affect communities. Full stop. All of these colleges are employers. All use land in their communities. All set policies. That means they are political, and our choice to engage these institutions is activism. People don’t call that activism, but if you employ people, you use their land, set their policies… that is activism. We have a responsibility as faculty, who are presumably the governing body of the university, to ask important questions about how our institutions are going about this work.

Faculty members are activists. The question is whether or not faculty are conscious activists. Are they aware of what they’re doing? Being in community with each other should mean being a responsible member of your community. Our colleagues in physics in the 1970s asked themselves questions about how their research might be informing the creation of a bomb that could end humankind. They asked themselves about that, and they made choices about it. Our colleagues in chemistry ask themselves about how their research may improve or diminish the quality of human life. Even if they’re not doing medical research, you don’t think they ask themselves about that? If you’re wide awake, [laughs] woke, then you should recognize that you are working in a place that does affect the world.

The online version of this article has been modified from the original version. Dr. Melissa Harris–Perry is now listed as the second author.

Hana Brown is in the sociology department at Wake Forest University (WFU). She studies the political origins and consequences of social inequalities. Melissa Harris-Perry, an award-winning educator, author, activist, and journalist, is in the department of politics and international affairs at WFU and is the founding director of the Anna Julia Cooper Center on Gender, Race, and Politics in the South.

Hana Brown is in the sociology department at Wake Forest University (WFU). She studies the political origins and consequences of social inequalities. Melissa Harris-Perry, an award-winning educator, author, activist, and journalist, is in the department of politics and international affairs at WFU and is the founding director of the Anna Julia Cooper Center on Gender, Race, and Politics in the South.