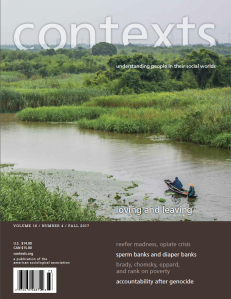 In the last issue of their editorial tenure, Syed Ali and Philip Cohen reflect on their time as editors. Elsewhere, contributors consider the landmark Loving v. Virginia case, the moral framing of drug epidemics including opiates and the reemergence of a federal anti-marijuana stance, trends emerging from the latest wave of the longitudinal General Social Survey, and why, even faced with repeated natural disaster, simply leaving home isn’t always on the table.
Download this issue
Previous Next

Virginia is for Lovers

Four essays on the Loving v. Virginia case, including the “bureaucratic genocide” that narrowed mildred loving’s racial identity, the persistence of racial binaries alongside the rise of intermarriage, and public constructions of memory. Read More

Residential segregation in the U.S. has declined by 25% since the 1970s, meaning fewer majority White neighborhoods and an increase in integrated and multi-ethnic neighborhoods. Read More

Feeling inauthentic? Publicly displaying your appreciation for “lowbrow” art might be the answer. According to Oliver Hahl and colleagues, writing in American Sociological Review, … Read More

A new study by Rachel Shattuck finds that young women’s wishes about parenting and marital status may materialize in adulthood. The research, published in … Read More

Pushes and Pulls for Professional Women

On Culture, Politics, and Poverty

On Saturday evening, August 26th, Hurricane Harvey was bearing down on the Texas Gulf Coast. Houston had been hunkered down for more than 24 hours, … Read More

Where Intersectionality is a Strategy

Despite a consensus that men’s involvement is crucial to women’s rights movements, including the long-standing push to stop violence against women, it remains a struggle … Read More

Children adopted into families whose race or ethnicity differs from their own—transracial adoptive families—force their parents to confront uncomfortable racial realities. Read More