Undocumented Asians, Left in the Shadows

Asians are the fastest growing undocumented racial group in the United States (see below), with a six-fold increase since 1990. The Asian American Center for Advancing Justice estimates that nearly one in in every seven Asian immigrants was undocumented in 2015, and the Center for Migration Studies estimates that the share of Asian Americans among all undocumented immigrants rose from 7% to nearly 16% in the same year. How can all these people remain so invisible in American public discourse? 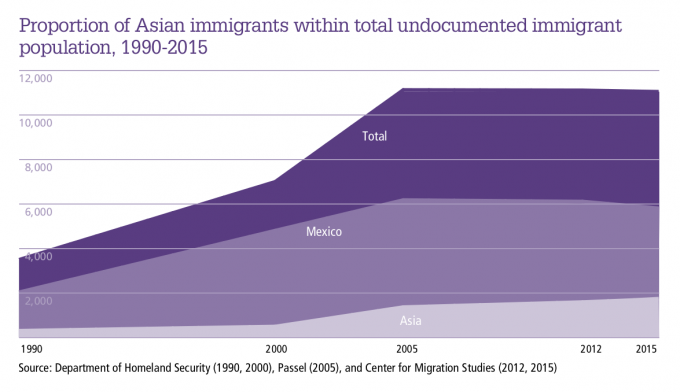 The Paths of Undocumented Asian Immigration

Each of these four mechanisms creates costs for individual immigrants. These include, of course, the financial cost of coming to the United States and the costs associated with obtaining documents, as well as “social costs,” like the loss of family and community support, and psychic costs like the introduction of deportation fears. These mechanisms make it difficult to project the population of undocumented immigrants. Take the group of immigrants whose authorization expires: whether an international student overstays her visa or an H-1B visa holder’s company goes bankrupt, the change in status is the same. A documented immigrant has become undocumented. 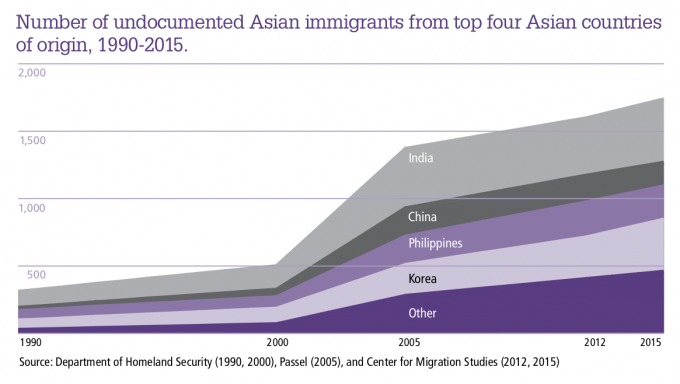 Today, much of the immigration debate in the United States focuses on “innocent” youth, called the DREAMers, who were brought to the United States as undocumented immigrants as children. It was this supposedly “deserving” immigrant for whom DACA was created. Yet, the pernicious rhetoric of the deserving youth recreates the stereotype of the model minority. Focusing reform efforts on DACA-eligible and college-bound youth keeps other undocumented immigrants in the shadows, living in fear. Ethnic enclaves such as Koreatown in Los Angeles demonstrate how other undocumented communities are so often sidelined in immigration debates.

Hunter Kim (a pseudonym) is an undocumented Korean-ethnic youth in his mid-20s. He grew up in the United States as a documented immigrant and wanted to obtain a college education, but became an undocumented immigrant when he reached adulthood. Hunter came to the United States with his parents in 2005. Shortly after their arrival, the Kims transitioned from tourist visas to F-1 visas by enrolling in a pay-to-stay school disguised as an English as second language school in Koreatown. This was a common path for Asian immigrants, and it meant spending thousands of dollars in tuition each year. Hunter thus grew up in Koreatown with an F-2 status—the visa for dependents of people with F-1 visas. When it came time to attend college, however, he needed to change his status by getting an F-1 visa. That was a problem: because he grew up documented, Hunter didn’t qualify for DACA and his access to funding and work was limited. He was forced to decide between a real college education and the struggle to pay tuition or a pay-to-stay school funded by working under-the-table to sustain his F-1 status and support his family. He chose the latter because Hunter knew he would be in the same predicament after college: his degree would not guarantee that he could obtain an H-1B visa, nor would it allow a path to permanent residency.

Those who choose to gain an F-1 visa by enrolling as international students at unscrupulous for-profit schools can find themselves on the hook for $3,600-$10,000 in tuition per year. This “tuition” ultimately functions as a fee for maintaining documentation. Others will find ways to pay their employers to continue supporting a work visa, even though constant sponsorship is no guarantee that the government will approve an immigrant’s application for permanent residency. And, if adult children and their families cannot afford a pay-to-stay solution, they’re not just back to square one, they’re suddenly undocumented.

The loss of documentation affects the entire community, especially because it can happen in such obscure ways. Some residents grow up with a documented status as dependents of parents with F-1, J-1, or H-1B visas and, like Hunter, lose their status when their parents can no longer claim them as a dependent or when they are unable to pay to sustain their visa status. Some will have applied for permanent residence, but those who don’t are rendered undocumented and ineligible for DACA.

The everyday lives of residents in Koreatown make the undocumented experiences created by the web of U.S. immigration policies hyper-visible. In this active gateway space, the overlapping and diverging stories of Korean immigrants are interconnected. We can see, in this microcosm, the many pathways into and out of immigration statuses in the United States, as well as the entrepreneurs preying upon people with precarious statuses. None of the proposed solutions to our immigration troubles will help everyone, but there are some partial solutions. For instance, undocumented immigrants in some states, including California, are able, if they grew up in the state, to pay in-state tuition at valid four-year institutions and earn legitimate degrees. One of the major roadblocks, however, remains the misconstruing of Asian Americans as a homogenous group of “model minorities” as well as the stereotyping of undocumented immigrants as Latinx. These parallel errors hide the experiences of millions of people living and working in the United States and foreclose opportunities to strengthen all communities.

For more comprehensive information on H1-B visa requirements and processes, please view the link below.

Soo Mee Kim is in the sociology department at California State University-Los Angeles. She specializes in urban and political sociology, immigration, and Asian American studies. Aggie J. Yellow Horse is in the departments of Asian Pacific American studies and justice and social inquiry at Arizona State University’s School of Social Transformation. She studies immigrant health, families, and social demography.

How or where do these undocumented immigrants obtain Healthcare; from Doctors and Hospitals?

Soo Mee Kim is in the sociology department at California State University-Los Angeles. She specializes in urban and political sociology, immigration, and Asian American studies. Aggie J. Yellow Horse is in the departments of Asian Pacific American studies and justice and social inquiry at Arizona State University’s School of Social Transformation. She studies immigrant health, families, and social demography.