The scientist at the front of the room hunched over and splayed his arms out to his sides. Waddling a bit like a penguin, he shuffled his feet over to one side, then the other as he described how the Mars Exploration Rover Opportunity had recently explored a part of the planet Mars. Suddenly he looked up, his eyes searching for the ethnographer in the back of the room. “Janet, get your camera!” he exclaimed, “I’m doing the Rover dance!”

Most scientists who work on NASA’s robotic space exploration missions can tell you how their spacecraft works and what their instrument of choice can measure on other planets. But in my eight years as an ethnographer with the scientists and engineers who explore our solar system, I never saw anyone foster the same interplanetary connection with their robots that the Mars Exploration Rover team members did.

It started with the little things: stories about what the robot was doing on Mars that day that used anthropomorphic language to tell the tale. Spirit and Opportunity needed time in their day to take a nap, wake up, or go to sleep at night. Sometimes people talked about the robots like their children or their aging grandparents, with a language of care filled with emotion. We celebrated Martian birthdays with cake and ice cream on Earth. Like other ethnographers on the team before me, I got used to the fact that whenever someone on the team said “we,” they were usually talking about the robot.“Janet, get your camera! I’m doing the Rover dance,” exclaimed the scientist at the front of the room.

It got stranger. Team members explained how they used the thousands of images that the robots returned from Mars to “see like a Rover”: peering into the infrared to detect minerals in Martian rocks that would be invisible to the human eye, getting used to 3-D projections, fish-eye lenses, and false colors that lit up like a Warhol print. There were images for press releases too—the ones painted in red, butterscotch and brown that were supposed to imitate what it would look like if you were standing on Mars—but these were mainly for the public. Behind the scenes, I got used to seeing the world from a perspective taken at five feet off the ground, with eyes set thirty centimeters apart, a planet brilliant in pink, green, and turquoise blue.

It wasn’t long before “seeing like a Rover” turned into feeling and being like a Rover. People used their bodies to imitate the Rovers’ own physical form and range of motion. They splayed their arms out to embody the solar panels, reached an arm over their heads to imitate the cameras atop the robotic mast, maneuvered their wheelie chairs to approximate the roll of robot wheels over a distant planetary surface. They did all this even when they were speaking to their colleagues on a teleconference call with no one else in the room. 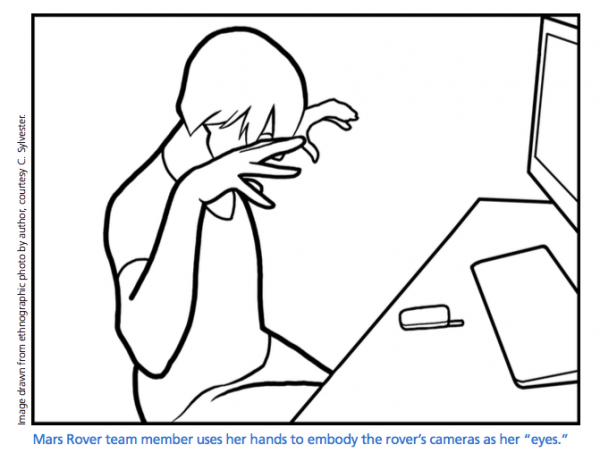 I came to recognize and codify these gestures as what I called “the Rover dance.” Taken together with the visualizations, talk, and rituals that I observed on the mission team, this embodied approach to robotic experience cemented our connection with explorers on a distant world.

This connection had unusual social effects on Earth as well. When it was a difficult day on Mars, people shuffled around the office, hunched over under the weight of a dust storm on another planet. Soon people were telling me stories about how they hurt themselves working in their garden, going salsa dancing, or in a tai kwon do class, mirroring the stuck wheels or frozen shoulder joints that their robots suffered on Mars. When Spirit was trapped in the sand in the summer of 2011, people cried at their desks. They couldn’t focus on their jobs. Relationships fell apart.

As a sociologist studying the mission, these moments provided a fascinating opportunity to think about how we interact with technology in our daily lives. Certainly we develop strong relationships with and attachments to our machines, and the principles of anthropomorphism are well known. But going a step beyond this interpretation means thinking more seriously about the organizational context in which we encounter these devices. Here it’s worth noting how the Mars Rover team works on Earth to understand why it is that they might perform such dances or experience an emotional rollercoaster along with their robots’ highs and lows.

I often describe working on a robotic spacecraft team as being on a bus with 150 other people, where everyone wants the steering wheel. The robot is not autonomous: a large group of scientists and engineers on Earth must look at the available data and make a decision. Where should we drive? Which images should we take? What will we do today on Mars, and what will we not have time for? All NASA mission teams face this problem, which means developing organizational tools and a culture of decision-making that is specific to that community and its robot.When Spirit was trapped in the sand in the summer of 2011, people cried at their desks. They couldn’t focus on their jobs. Relationships fell apart.

On the Mars Rover mission, the team features a charismatic leader and a flattened hierarchy. Any scientist can use any instrument on the Rover to solve a scientific question. Decisions are made via unilateral consensus. This is unusual for NASA missions, which tend to look to bureaucratic engineering organizations for inspiration rather than the flat forms made famous in Silicon Valley in the 1990s. And now, after over ten years working together, the Rover team’s process is relatively seamless. Mission personnel exhibit an easy solidarity that sociologists since Durkheim would identify as mechanical or tribal.

Seen in organizational context, the visualizations, forms of talk, gestures, and even emotions on the mission help to make this consensus possible. The visual forms of seeing like a Rover accomplish the hard job of getting everyone on the same page, where they can more easily arrive at the tough decisions facing them each day as a unified team. Seeing Mars from the Rover’s point of view (more specifically, the team’s version of the Rover’s point of view) cements this visual solidarity. Everyone begins and ends the day together, in the body of the robot on Mars. Just as it takes membership on the team to read and understand the visualizations that they produce, these visualizations make and reinforce membership on the team as well.

In his theory of interaction ritual chains, sociologist Randall Collins theorizes that a combination of mutual focus and shared rituals can give rise to emotional energy and an affective sense of belonging. In this case, we see that emotional attachment extended not only among members of the team, but to their robots as well. At a distance of millions of miles, the Rovers become something of a team totem: their success and wellbeing is both the purpose of the team’s activities and the reflection of those activities.

All this points to new avenues for thinking about the sociology of technology, robots in particular. We often examine people entranced by their mobile screens, their computers, or their wearable devices to make pronouncements about technology’s role in our individual lives. Studies of human-robot interaction, too, tend to focus on whether or not the robot is human-like enough for us to believe it has a life of its own. These studies of micro-level interactions are important for understanding human-machine communication, as ethnographer Lucy Suchman has shown, or for detecting the politics of platforms, as communications scholar Tarleton Gillespie has done.

But seeing robots and other technologies in organizational contexts exposes how these technologies are embedded in wider forms of social relations. In the case of the Rovers, doing sociology on a NASA mission means looking at how working with robots in space requires understanding important social work on Earth—in this case, the politics and practices of consensus management. It exposes the everyday technologies—the digital image processing tools, the teleconference calls, even the PowerPoint slides—that assist in the production of consensus.

We can also look closer to Earth for how technologies participate in (or inadvertently subvert) such social contexts. Computers in the home are part and parcel of the hierarchies, emotions, and organizational context of a family. And as technologies move into health care, they will need to navigate the hospital hierarchies of surgeons, doctors, and nurses, too.

Doing robotic sociology is no longer a far-fetched enterprise. After all, as the Mars Exploration Rovers demonstrate, even robots millions of miles away hold an important place in our social world.

Janet Vertesi is in the department of sociology at Princeton University. She is the author of Seeing Like a Rover: How Robots, Teams, and Images Craft Knowledge of Mars.

I love this post. And just when I was putting a link to it into an old post I wrote about 'seeing like the Mars Curiosity rover' I saw that the very same Janet, whom I quoted in my post and who in fact inspired it, wrote this post. I just wanted to say hello! https://blogs.nottingham.ac.uk/makingsciencepublic/2012/08/08/seeing-like-the-mars-curiosity-rover/

Janet Vertesi is in the department of sociology at Princeton University. She is the author of Seeing Like a Rover: How Robots, Teams, and Images Craft Knowledge of Mars.