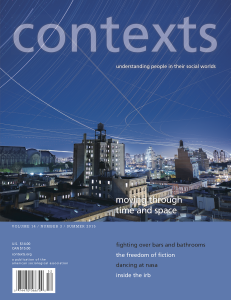 Sociology is all about putting people—their identities and their interactions—in social contexts. And those contexts are nested in the inescapable intersections of time and space.
Download this issue
Previous Next

Whereas Durkheim considered fatalistic suicide caused by high levels of social regulation a marker of premodern societies, this research suggests gender regulation may be harmful to adolescents’ mental health in the present day as well. Read More

As more middle-class people felt The Great Recession’s effects, inequality became more visible. The public increasingly realized the top 1% was not suffering in the same way as everyone else. Read More

The pieces that follow explore the tangled web of race, policing, and justice in America, with a view toward healing. Read More

Instead of hurrying to the next question on an interview protocol, it may be well worth the time to question those spontaneous bouts of laughter. Read More

Proximity to violence seems to affect children differently based on psychological traits. Anxious children may have fewer cognitive resources to devote to mental coping strategies when they encounter community violence. Read More

Complain about your job on Facebook? Your children? What about your marriage? Read More

Border-crossings in Literature and Sociology

Back in February, Philip Kasinitz organized a wonderful panel on crossing borders in literature and sociology at the Eastern Sociological Society meeting in New York City. He brought together four brilliant writers who engage in creative non-fiction and fiction: Suketu Mehta, Suki Kim, Teju Cole, and Andre Aciman. Read More

All photos and text © David Bacon, 2015. The Spaniards conquered the Zapotecs of the central valleys of Oaxaca, Mexico, almost 500 years ago, in … Read More

Race matters. It affects who our neighbors are, our interactions with law enforcement, and where we go to school. A new study by Matthew Hall, Kyle Crowder, and Amy Spring shows how race affects foreclosures, too Read More