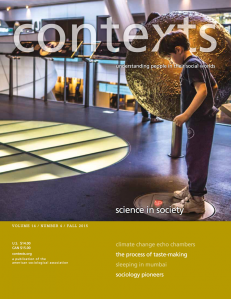 The social and political entanglements of science, from climate change and medical marijuana to the origins of modern American sociology.
Download this issue
Previous Next

Single people have an ever-expanding array of choices for romantic partners. Arranged marriages are no longer prevalent, and norms and laws … Read More

Alford A. Young and Jr. | Books

Over a century in the making, American sociology’s investment in the study of race has not resulted in a happy marriage. On the positive side, … Read More

In many countries, women have gained greater access to education, the right to work with fair compensation, and protection from violence. These all reflect changing … Read More

Dorothea Lange and the Art of the Caption

Dorothea Lange’s “Migrant Mother” is one of the most reproduced photographs in the world. Like other iconic images, it has taken on a life of … Read More

Draped over motorbikes and curled up on curbs, finding rest in urban india. Read More

Philip Cohen and Syed Ali | From the Editors

The quest of science to understand how the world works is inextricably tied to and bound by political machinations and social biases. Read More

The pressure is on to end marijuana prohibition. Read More