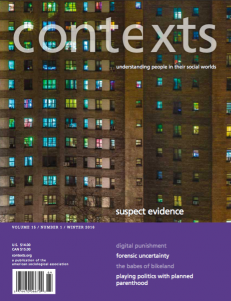 Evidence is important. Even the most skeptical rely on tested and re-tested scientific certainty every day. And good sociologists hold scientific evidence suspect even as we use the best we have to make the decisions we must.
Download this issue
Previous Next

Asian Americans are popularly recognized as successful academic achievers, to the point of stereotype. Over half of Asian American adults have a bachelor’s degree or … Read More

In Minneapolis, an annual “alleycat” bike race has become a powerful tool to educate and celebrate gender diversity in the cycling community. Read More

The pathway to adulthood is no longer one road, but perhaps five separate tracks, each reflecting different strategies toward and ordering of work, school, and family events. Read More

The Cost of Color

The relationship between skin tone, discrimination, and health for U.S.-born Blacks. Read More

What happens to masculinity if you opt out of promiscuity? Read More

More support for parents may help increase the birth rate, perhaps by relieving some of the difficulties of that transition to parenthood. Read More

Microscopic Hair Comparison and the Sociology of Science