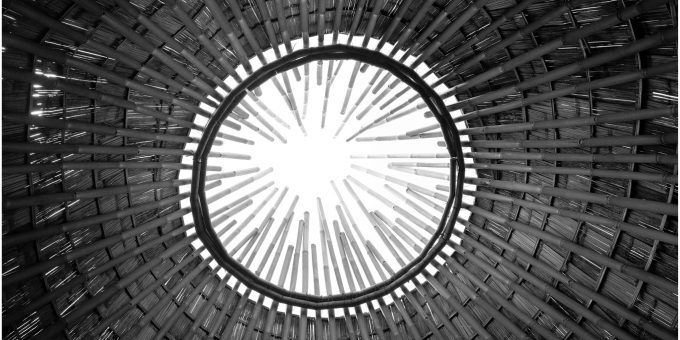 Those who believe it’s only a matter of time before U.S.-born Asian Americans shatter bamboo ceilings may have too much faith in meritocracies. [Public domain, structure by Eko Prowoto]

Asian Americans are popularly recognized as successful academic achievers, to the point of stereotype. Over half of Asian American adults have a bachelor’s degree or higher, compared to 37% of Whites, 27% of African Americans and 18% of Latinos. But they do as poorly as other minority groups in gaining management and executive suite jobs in major corporations. Why aren’t there more Asian Americans in management and in the C-suites, given the significant numbers who are highly educated and skilled?

Getting a job, for the most part, is not a problem for the degree holder. Movement up the pipeline is. Asian Americans face barriers in all industries. The Bureau of Labor Statistics in 2013 estimated that over 35% of Asian American workers were employed in professional industries, but their numbers in business executive positions and boardrooms were miniscule. And LEAP (Leadership Education for Asian Pacifics) found that Asian Americans comprise just 2% of executive officers and 2.6% of board members at Fortune 500 companies. (Blacks and Latinos hold 7.4% and 3.3% of the Fortune 500corporate board seats, respectively.)

Even in Silicon Valley, Asian Americans encounter a glass ceiling. ASCEND, an Asian American professional organization, using 2013 EEOC data from HP, Google, Intel, LinkedIn, and Yahoo, found that the higher you climb on the corporate ladder, the fewer minorities you will meet. Within these five companies, Asian Americans represent 27% of professionals, 19% of managers, and just 14% of executives. A similar phenomenon occurs with Blacks and Latinos. Whites are the only group whose proportion increases as they rise through the ranks.

Richard Zweigenhaft and G. William Domhoff, in their book The New CEOs, counted the non-White male CEOs of Fortune 500 companies in 2010. They found only 25 White women, 15 Latinos, 14 African Americans, and 20 Asian Americans. Among the 20 Asian Americans, only 5 were U.S.-born, 11 were South Asian, and all were from upper middle-class family backgrounds. In fact, all but the African Americans were from families in the upper one third of the class structure, highly educated, and had a personal style that was similar to that of the “old” White male CEOs. Their analysis showed that the corporate elite is reproduced among a small set of elite women and non-White men.

Other researchers believe it is just a matter of time before U.S.-born and raised Asian Americans will shatter the “bamboo ceiling” to enter the highest tiers of the workforce. In Blurring the Color Line, Richard Alba noted that, as White baby boomers retire, there should be more room at the top for Asian Americans to advance.

However, belief in such a meritocratic process is too simplistic and elite cultural reproduction by a few is too deterministic. Intervening processes along the pipeline affect achievement outcomes. For my forthcoming book on Asian Americans and corporate work, I interviewed over 80 second-generation Asian Americans between the ages of 29 and 57, U.S.-born or immigrated to the U.S. before age 13, who either felt trapped under the bamboo ceiling or had moved up the corporate ladders. What made the difference?

To get ahead today requires a combination of an ability to learn the requisite “soft” skills and businesses’ investment in minority groups for management development. Diversity programs that look to race, gender, sexual identity, and/or the differently abled as factors for inclusion make a difference in who gets to the top.

Further, in reaching the managerial, directorship, or partnership levels, signaling to the organization that you are a cultural fit matters more than hard skills or “intelligence” alone. Building relationships with executives that provide visibility, learning how to brand yourself, and tooting your own horn are necessary. These soft skills, refined via presentations and interactions with peers, mentors, and sponsors, are key.Trusting in meritocratic processes is too simplistic, and elite cultural reproduction is too deterministic. Intervening processes along the pipeline affect achievement outcomes.

That proved frustrating for some of the people I spoke with. Alice said that a senior vice president at her company “sat me down in her office and started making some small talk, asking me ‘How do you like the job?’ Then she added, ‘We know that you’re doing a great job, but you should make an effort to speak up more and make an effort to make people get to know you. Be more conversational.’” But Alice said that in her rank, those social skills had “no role. I can produce data and run models.”

Discouraged workers like Alice told me that they had discovered too late that the techniques for school and college success—working hard, being smart, being the best at what you do, and not rocking the boat—were practically useless past the first few junior-level positions in the corporate world. Eric, who was able to adjust, had to “throw out the window” what he labeled “Asian stuff: kowtow to elders, defer to authority, don’t ask questions.” He used those methods early on to brand himself as a “trustworthy quant” to the point that “managing directors fought to have him on their team.” After a number of years, though, his performance reviews started to suffer because of that reputation. Managers said Eric was “not commercial enough… not someone who can get the business.” Eric changed his ways and his advancement up the pipeline was back in motion.

Compared with their White counterparts, Asian Americans also lacked sufficient social contacts—those individuals who would share information about important projects, initiatives, opportunities, and the hidden rules of the work world. While many parents were highly educated and worked as researchers, scientists, accountants, engineers, and ethnic entrepreneurs, they were not able to introduce their adult children to suitable mentors. The adult children were often the first ones in the corporate world. It was a rude awakening for the second gen to learn that their time could have been better spent at happy hour than in perfecting Powerpoint decks. Mike described his experience networking at a work function, “if you were used to this from a very young age, it would be easy. I observed people making small talk, discussing their families, vacations, sports, but not politics.” He added that, “even me, having college educated parents, did not do this.”

The Asian Americans who rose to top levels possessed incredible people and leadership skills. They did not all come from the boarding schools and the Ivy League, although such credentials didn’t hurt. They often spent time in high school, college, and graduate school learning and perfecting how to socialize, lead, and network. Some entered the work world with close friends who would later become executives and important contacts.

There was another factor that helped propel them into leadership positions. Quite a few who moved up the ladder in the late 1980s and 1990s credited affirmative action programs that had explicitly identified minorities for management development. Resources were invested in these programs because these corporations saw the value of diverse leadership. Significantly, affirmative action program participants learned what was required to be a leader and found themselves in a very supportive cohort. Periodically, they were assigned to work with executives and provided mentors. Among the skills one of my interviewees learned in his affirmation action program was effective networking: “I’m very conscious of speaking to executives. For every single person, I try to remember something about them, that I can relate to,” he explained. “I need to find that fact, and figure out how it relates to me because I have a different background. It’s one of the most important skills I learned.”For the Asian Americans I interviewed, it was a rude awakening to learn that their time could have been better spent at happy hour than in perfecting Powerpoint decks.

More recently, diversity and talent management initiatives have replaced older affirmative action programs to hire, retain, and promote people from various racial, ethnic, gender, sexual orientation, and differently abled backgrounds. Once a potential candidate for management and executive titles self identifies, firms place them into leadership training, with mentors, sponsors, and coaches. They host conversations where employees can meet high-ranking executives and develop closer social contacts that they might not otherwise have. Their social skills are honed as they are exposed to a variety of people, especially when they are rotated through high-level positions.

Asian Americans, in particular, feel the stigma of diversity programs. Jim, a college graduate of the early 2000s, said he avoided referring to having been a part of a diversity program, if he could. He did not want to be associated with the negative impression that he might have gotten a leg up because of affirmative action or diversity initiatives. His comment reflects a wider sentiment that you might not be qualified if you had “that kind of help.”

However, without these programs, there would be even fewer Asian Americans in high-ranked professional jobs. Diversity programs today are about inclusion, not attempts to pro-actively “fix” discrimination in the way past affirmative action programs were designed.

The second-generation adult workers I interviewed told stories that complicate the upward path that we assume most Asian American children have. Their work narratives are relevant for women and all minority groups because they reveal how individual efforts and structural programs can help all those not yet equally represented in management positions and corner offices. If we are to fully understand what drives and limits social mobility, it is important to recognize and learn from the Asian American experience.

Margaret M. Chin is in the sociology department at Hunter College and the Graduate Center. She is the author of Sewing Women: Immigrants and the New York City Garment Industry.

The Trump factor is one of them. A 2018 poll of 411 registered voters who identify as Asian, conducted by the Asian American and Pacific Islander Civic Engagement Fund, found that 70% of Asian-Americans felt angry at the White House, and 69% felt disrespected by the Trump administration. These are "two emotions that are good signals of political engagement," Lee said. The same survey found that 65% of Asian-Americans believe it is more important to vote this year than it was in 2014.

Margaret M. Chin is in the sociology department at Hunter College and the Graduate Center. She is the author of Sewing Women: Immigrants and the New York City Garment Industry.