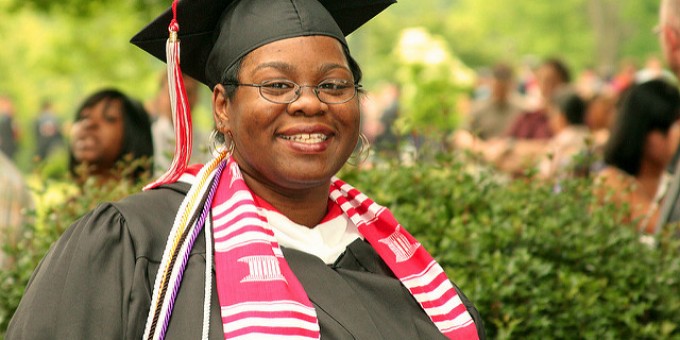 Quitting college isn't the same thing as not yet having finished. brandonink2001, Flickr CC https://flic.kr/p/6pSLyj

Although many sociologists have examined educational attainment, the meaning of measures like graduation rates and time to degree aren’t always straightforward. In particular, the failure to finish college in a timely manner doesn’t mean people have abandoned the goal. In the journal Sociology of Education, Nicole M. Deterding studied low-income, Black mothers whose degree progress was interrupted by Hurricane Katrina. Deterding investigated the women’s subjective investment in graduation, despite setbacks and even a high likelihood of never finishing.

The women in the study participated as enrollees in the Open Doors program, a Louisiana initiative that provided access to community college to low-income students. Deterding found that although 53% of her participants were not enrolled in an educational program five years after the start of the study, nearly 76% still wanted to pursue college. They cited time constraints and cost as major impediments, rather than any downward shift in aspirations. Not only did these women see college as a means to obtain a living wage, but they also saw symbolic value in obtaining a degree for giving them a sense of self as a “striver.” These findings contradict the notion that difficulties faced in the course of obtaining a degree weaken aspirations or expectations. Individuals don’t see themselves as having quit college, but as not yet having finished college.