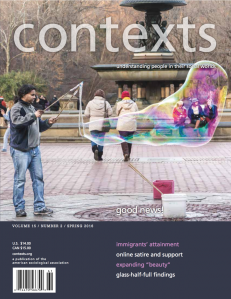 Racial inequality, sexism and rape, poverty and exploitation, heteronormativity—sociologists are dedicated to uncovering injustices, analyzing why and under what conditions they arise, and seeking out ways they might be changed. There’ll always be problems in the world, but for this issue we’ve decided to look for what’s getting better, what our managing editor calls the “sociology of the A-OK.” Americans are happier and less stressed, affordable housing is creating new communities, and U.S. attitudes toward LGBTQ citizens are better than ever. Let the good news roll!
Download this issue
Previous Next

Did Baby Boomers Opt Out Or Lean In?

Among Boomers, a great number were not forced to opt out of working due to family or health constraints. Read More

Youth activists emphasize that their feminism has no limits. It is intrinsically linked to the entirety of their lives. Read More

Children have self-determining agency, and parents may not hold as much responsibility for their children’s beliefs as previously thought. Read More

It is worth appreciating how much major social indicators in American society changed over the past 100 years. Read More

Declining economic disparities at the neighborhood-level represent a positive sign for communities where people live, work, and play. Read More

A Hand Up for Lower-Income Families

Welfare queens driving Cadillacs. Food stamp kings buying filet mignon. The stereotypes are rife. What if there was a way to support lower-income families without … Read More

Racial inequality, sexism and rape, poverty and exploitation, heteronormativity—sociologists are dedicated to uncovering injustices, analyzing why and under what conditions they arise, and seeking out … Read More

Syed Ali and Philip Cohen | From the Editors

Talking with sociologists can be a tad bit depressing. Just this once, though, we’re focusing on what’s getting better. Read More