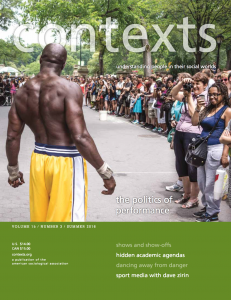 A multifaceted issue covering diversity in sport and the Oscars, reviewing Hamilton and Wonder Women, and exploring the world of mommy bloggers and street performers.
Download this issue
Previous Next

“Sometimes it’s a good thing to be like your friends, and sometimes it isn’t…. If they’re getting all As, of course I want to be … Read More

Lately, American government has defaulted to gridlock. Government shut-downs are a routine response to deep conflict, and in the wake of Supreme Court Justice Antonin … Read More

Last summer, the field of psychology was shaken by two reports. They called into question some of the applied and experimental activities of the field. Read More

Maybe you’ve heard on Facebook that “You never know how much your parents love you until you have a child to love.” This feel-good meme … Read More

On the same day Donald Trump won the Indiana Republican Primary, virtually sealing his candidacy for the Presidency of the United States—May 3, 2016—the American … Read More

In a recent American Sociological Review piece, Michael Light and Jeffrey Ulmer analyze homicide deaths between 1989 and 2010 to examine the determinants of … Read More

The Problem of Urban Sprawl

The unique identity of a city has many origins, from the cultural and political to the historic and geographic. But perhaps the most basic defining … Read More

There are clear health disparities between Black and white Americans across many indicators, including mortality, disease, health behaviors, and self-rated health, but things are murkier … Read More

Why is there such persistent gender segregation in jobs in the U.S. labor force? One popular explanation is that women choose “family-friendly” occupations in order … Read More