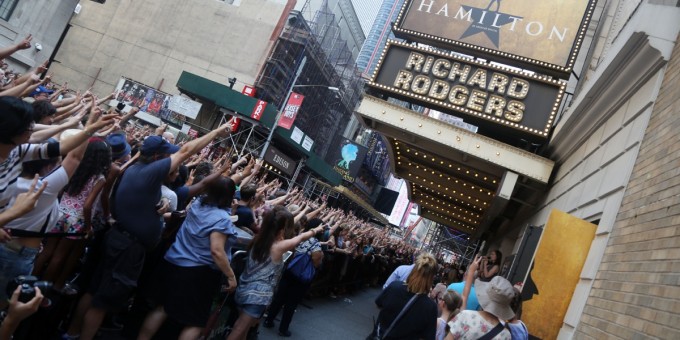 On the same day Donald Trump won the Indiana Republican Primary, virtually sealing his candidacy for the Presidency of the United States—May 3, 2016—the American Theater Wing announced that the musical “Hamilton” had been nominated for sixteen “Tony” awards, the most for a single production in the awards’ 70-year history. The coincidence reminded me that the previous October the cultural critic Wesley Morris had described Trump in The New York Times as “the presidential candidate for anyone freaked out by the idea of a show like ”’Hamilton.’” I know what he meant. A big part of Trump’s appeal is the unease many Americans, particularly older White rural and suburban Americans, feel about the nation’s demographic transformation. “Make America great again” sounds an awful lot like “Make America White again,” doesn’t it? And “Hamilton” may be the greatest artistic expression of that transformation that young, multi-racial, urban America has yet produced.

For any reader who has been in a coma for the past year, I should explain that “Hamilton” is a largely hip hop based retelling of the tragic story of the nation’s least remembered founding father, Alexander Hamilton, and his decades long rivalry with one-time friend Aaron Burr. The play culminates with the one thing most Americans do remember about Hamilton: the 1804 duel in which Vice President Burr took the former Treasury Secretary’s life (and we think politicians play rough now!). Its composer, lyricist, and erstwhile star is Lin-Manuel Miranda, who won a “Tony” for best musical at the tender age of 28 for “In the Heights,” a show that blended hip hop and Latin music with more conventional Broadway fare. Yet while “In the Heights,” was a hit, “Hamilton’s” impact on the New York theater scene has been nothing short of revolutionary. When it debuted at the Joseph Papp Public Theater in January 2015, word of mouth spread so quickly that the run was sold out before the laudatory reviews even went to press. In July, a revised and restaged version moved uptown to a large Broadway house, where even at Broadway ticket prices it sold out for a year in advance. The impossibility of getting tickets at any price quickly became a standard New York joke. The Obamas saw it. Bernie Sanders saw it. Donald Trump did not. Almost the entire play was released as an album, which and in a kind of reverse “crossover” sprang from the “musical theater” ghetto to reach the upper echelons of the hip hop charts. A few weeks later I was astonished, at a “Hamilton” singalong in my Brooklyn neighborhood, at how many middle school aged kids already had the score memorized. The production is now largely credited with keeping its title character on the ten dollar bill.

What is the appeal? Miranda, a New York born Puerto Rican, has laid claim to the most profoundly American of stories—the founding of the Republic. While some historical events have been rearranged and some characters have been merged in concessions to dramatic structure, for the most part, Miranda sticks remarkably close to the show’s primary source material—Ron Chernow’s 818-page, profoundly un-musical Hamilton biography (Chernow was a consultant on the show). Yet “Hamilton” never sounds, to quote my eye-rolling teenage daughter, like “some 10th grade history teacher trying to seem cool by using rap.”

Miranda’s genius has been to unearth the hip hop side of the founding fathers. As Times critic Jody Rosen writes, Hamilton makes “the link between hip-hop and the world of 18th century politics seem like the most obvious thing in the world—not a conceit imposed upon the history but the excavation of some essence with it.”

If the rapping founding fathers never come off as a gimmick, neither does the multi-racial cast. Most of the major parts are played by young people of color (King George and the Tories are played by White actors). The diverse ensemble includes Latinos, African Americans, Afro-Caribbeans, and Asian Americans. That is, “Hamilton’s” America looks like today’s—and certainly tomorrow’s—young urban America: “Just like my country,” Hamilton raps, “I’m young, scrappy, and hungry!”

The play also reminds us of the brashness of Hamilton and his revolutionary comrades. The historical Hamilton was only 18 when the fighting broke out. (Or possibly 20. His youthful penchant for self-reinvention apparently included some lying about his age). Lafayette was 18, and Burr 19. Young men, their revolutionary zeal and idealism mixed with outsized personal ambition, passionate love lives, and lot of ego and swagger. Like a rapper, Hamilton, the author of more than half of the Federalist Papers and tens of thousands of pages of other writing, used words as weapons—although, as history shows, he was not shy about settling scores with real weapons as well. “The Ten Duel Commandants,” a recurring motif in the play, is a direct quote from late rapper Notorious B.I.G.’s “The Ten Crack Commandments” that can’t help but remind the audience of the fates of both men.

Among the play’s highlights are taunting rap battles between Hamilton and his arch rival Thomas Jefferson. The conflict reveals Miranda’s take on the personalities of the two men whose struggles have long been seen as a defining analogy for the divides of the new nation. During the 20th century, progressives – form the New Dealers, to the 1960s radicals to my 10th grade history teacher – generally sided with Jefferson, the man who wrote “all men are created equal.” Hamilton, by contrast, was seen as an unappealing plutocrat, the man of Wall Street, the friend of the bankers.

In recent years, however, Jefferson’s stock has gone down. Contemporary Americans have a hard time squaring his utopian embrace of liberty with his racial attitudes and his personal economic dependence on slavery (not to mention his fathering children with an enslaved teenager). Hamilton, for his part, was an abolitionist who rose from poverty. Jefferson was a child of privilege, a romantic who hated cities and sought to discourage the urban growth Hamilton believed vital for the development of the new nation. And while Hamilton was clearly a man of finance, he believed strongly in financial regulation and public works. Indeed, Chernow and Miranda’s Hamilton seems an altogether more contemporary personality than the philosphe of Monticello.

The contrast between Donald Trump’s America and Lin-Manuel Miranda’s is clearest in their attitudes towards immigration. “Hamilton” is a celebration of the immigrant story and a tribute to immigrant reinvention. When the penniless orphan finds his way to the polyglot streets of Manhattan, the chorus sings, “In New York, you can be a New Man!” When Hamilton and Lafayette head into battle at Yorktown, they shout, “Immigrants! We Get the Job Done!” Hamilton’s improbable journey forms the dramatic center of the play. Aaron Burr asks as the play opens:

How does a Bastard,
Orphan,
Son of a Whore and
A Scotsman.

The Middle of a Forgotten
Spot in the Caribbean
By Providence, impoverished, in squalor
Grow up to be a hero and a scholar?

I will leave questions of strict accuracy to the historians, who are already arguing about it (whether they agree with Miranda’s interpretation or not, most acknowledge that “Hamilton” has been very good for business–being a specialist on late 18th century America has seldom been so cool!). Every generation reinterprets history in light of its own preoccupations, and Miranda has given us founding fathers that are historically plausible, but also deeply meaningful for our time.

But doesn’t bringing hip hop to Broadway risk being merely another example of the dreaded “cultural appropriation?” Many in the hip hop world were initially skeptical, but Hamilton has won over most. If anything it is the story of the founding fathers that is being appropriated, and rightly so, as newcomers and outsiders assert that this story belongs to them as much as to anyone.

Besides, the description of “Hamilton” as a “hip hop” musical was never more than half true. Yes, Miranda is completely immersed in the world of hip hop. He is a virtuoso rapper and the show quotes (or perhaps “samples”?) a long list of rap classics. Yet he draws at least as much from Broadway musical theater and on a host of musical genres from Rogers and Hammerstein to Swing to classic R&B (King George’s big numbers are tributes to early 1960s “British Invasion” rock —“British Invasion,” get it?). He is comfortable enough with all of these to combine them in ways that feel natural and somehow obvious. So with one foot firmly in hip hop and the other squarely in Stephen Sondheim and contemporary musical theater, Miranda completely refuses to stay in his lane.

If you are in need of a tough and unsentimental vision of an America that, for all of its flaws, is capable of reinvention, an America that tears down walls rather than builds them—I can offer no better advice than to listen to “Hamilton.”

He also understands that the importance of lyrics in musical theater. Lyrics that deepen and advance the drama separate the modern musical from those earlier reviews whose flimsy plots were basically vehicles for strings of pop tunes. And Miranda, while a good composer, is a truly great lyricist. Once again, he has unearthed a marvelous if unexpected affinity. Great lyrics are all about the interplay between the sounds of words, the meanings of words, rhythm and meter. So is great rap.

Can Hamilton avoid being a victim of its own success? Can the play continue to work night after night with the mostly White, middle-aged audience that can afford to pay hundreds of dollars for a ticket? In an effort to ensure at least some audience diversity, the production has given away record numbers of low-cost and free tickets to school groups and via a nightly lottery. Still, how it will “travel” once companies in other cities open later this year remains to be seen. For now, however, if you are looking for solace in the year of Trump, if you are in need of a tough and unsentimental vision of an America that, for all of its flaws, is capable of reinvention, an America that tears down walls rather than builds them—I can offer no better advice than to listen to “Hamilton.”

Philip Kasinitz is the long-time chair of the doctoral program in sociology at the Graduate Center of the City University of New York (CUNY). He is the co-editor, with Sharon Zukin and Xiangming Chen, of Global Cities, Local Streets.

Philip Kasinitz is the long-time chair of the doctoral program in sociology at the Graduate Center of the City University of New York (CUNY). He is the co-editor, with Sharon Zukin and Xiangming Chen, of Global Cities, Local Streets.