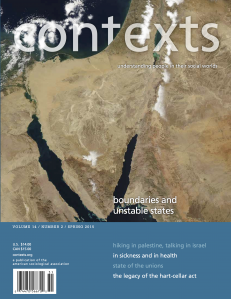 Examining boundaries and unstable states, from the liminal lives of the undiagnosed to those of Palestinians living in Israeli settlements, this issue considers lines drawn on maps and within hearts.
Download this issue
Previous Next

Oyler School Against the Odds

Drive west from downtown Cincinnati, over the railroad tracks that snake beneath the 8th Street Viaduct, and you’ll find a little slice of Appalachia, nestled … Read More

My father arrived in New York City in 1970 from Pakistan with only a few things: a suitcase, … Read More

Image by philhearing via Flickr CC. Social psychologists stress the importance of a sense of personal control as well as its sister traits, self-efficacy … Read More

An artist’s remix of an “Unbroken” movie poster shows how far the “Hands Up, Don’t Shoot” message from Ferguson spread. Image by PosterBoy via … Read More

Photo by dhendrix73 via Flickr Many have decried the continued segregation of U.S. public schools along race and class lines, calling for action to … Read More

Photo by darkday via Flickr.   Over the past few years, stories of transgender children celebrated by their parents have flooded the Internet. But … Read More

Photo by KittyKaht via Flickr.   If you’re an academic, moving to the non-academic, post-academic, or alt-academic job market requires a revolution in your … Read More