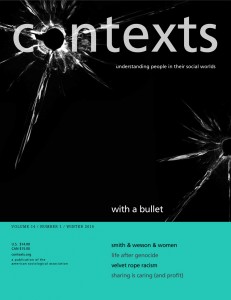 New editors Syed Ali and Philip Cohen start their tenure with a bang, including articles on carrying (and concealing) weapons, on the lessons of Ferguson, and what uprisings in France can teach us about protests in the U.S. Also: lesbian geographies, Piketty in perspective, recollections of genocide, and “velvet rope racism” at urban nightclubs.
Download this issue
Previous Next

I’m in my Florida room inside the Silver Sands Mobile Home Court. It is a linoleum-floored, screened in porch that runs the length of my … Read More

How carrying a concealed weapon reinforces and challenges gender norms and changes how women move through and experience public space. Read More

Vaccine refusal is an elite process in which mothers embrace and replicate privilege in order to advocate for their children against state public health standards. Read More

How anti-Muslim fringe organizations became part of the mainstream in the post-9/11 world. Read More

The iPhone Effect on Social Interaction

Chhe, courtesy globalchildren.org. In 1975, the Khmer Rouge overthrew the government of Cambodia. Over the next four years, the communist political party embarked on … Read More

When we think about gay neighborhoods, many of us are not immediately imagining lesbians. But like gay men, lesbians also have certain cities, neighborhoods, and … Read More

On the Sharing Economy

Sharing comes easily to us. We share particulars like names and lineages, ideas and experiences, kisses and embraces, as well as vital generalities like air … Read More

Birth Control, Religion, and the Social Construction of Whiteness

Most people think of access to birth control as a women’s issue, but its history is a lot more complicated. Read More