I’m in my Florida room inside the Silver Sands Mobile Home Court. It is a linoleum-floored, screened in porch that runs the length of my single-wide trailer. Fifteen feet away, in front of my neighbors’ powder blue mobile home, a decorative sign reads: “Welcome to Paradise.” I’m tending the orchids my neighbor across the street gave me when another of our neighbors left to move in with his children, abandoning an extensive orchid collection in his still-furnished mobile home. I mist my orphaned orchids to the sounds of an old radio. I hear country singer Kacey Musgraves croon, “Same hurt in every heart. Same trailer, different park.”

It resonates. All of us here in Silver Sands are being evicted. This 55-and-older mobile home park once housed about 130 residents. The few who had money saved or families willing to house them are already gone. The rest of us have six months to get our selves, our belongings, and our homes off the property.

Mobile homes are memorialized in country songs and in the iconography of middle America, but they are often ignored, stigmatized, restrictively zoned, or outright prohibited within urban policy and planning ordinances. Parks like Silver Sands are commonly sited on low-value land at the outer edges of cities and towns. Mobile home park owners create profitable uses for otherwise undesirable land by renting lots to residents who own their homes and pay low monthly lot rents. Together, these characteristics make mobile homes affordable sources of housing for 22 million Americans. In fact, mobile homes are the single largest source of unsubsidized affordable housing in the U.S. They shelter large populations of poor, elderly, and immigrant homeowners.

These same characteristics make mobile home parks one of America’s most precarious modes of housing. As cities expand around parks, the lands they occupy become more desirable, and selling them gets more attractive. Because residents own their homes but rent their lots, landlords can sell parks at any time and evict residents with only 30 days’ notice in most states. In Florida, housing groups estimated that 1,500 parks were at risk of closing in 2010 alone. In 2011, I moved into one of these parks as part of two continuous years of ethnographic fieldwork living in and being evicted from closing mobile home parks in Texas and Florida, the two U.S. states with the largest numbers of mobile home parks.

These pictures were taken in Silver Sands (a pseudonym) where I lived for 11 months during the time before we received eviction notices and until the final date of our tenancy. Over this year and a year of revisits, I lived inside Silver Sands when it was still intact. I became part of residents’ daily routines—gardening together, hanging out on patios, and talking in the communal laundry room. I was evicted alongside my neighbors and shared their experiences as our community was dismantled. I worked beside them as they attempted to manage the relocation process, hosting some in my trailer in the months it took to re-site their own homes. I kept up with them in the year after they were scattered from their homes to new parks, family homes, apartments, and homelessness.

Eviction at Silver Sands was experienced as both a sudden crisis and a prolonged and confusing ordeal. Relocating a mobile home costs between $5,000 and $10,000, as much as a decade’s worth of equity for mobile home owners and an out-of reach cost for most in Silver Sands, who lived on meager or fixed incomes. The logistics of assessing, preparing, moving, and reinstalling a mobile home are complicated and involve the coordinated efforts of many different professionals. In their own words, residents of Silver Sands describe the park’s closure and the community-wide eviction as, more than anything, a brutal shock and a deeply felt loss. They also describe a second-order trauma, felt as a prolonged and disturbing dislocation in which nothing was certain and everything was “up in the air.”

In these photographs, my colleague Edna Ledesma and I attempt to document life inside Silver Sands before, during, and after 130 residents were evicted from the park where many had lived for decades. These photographs and narratives capture the dismantling of a community.

“I’m happy here. I’m happy as a bug in a rug right here. This is paradise in Florida. On a hot day, this is perfect and we have the view.” © Edna Ledesma 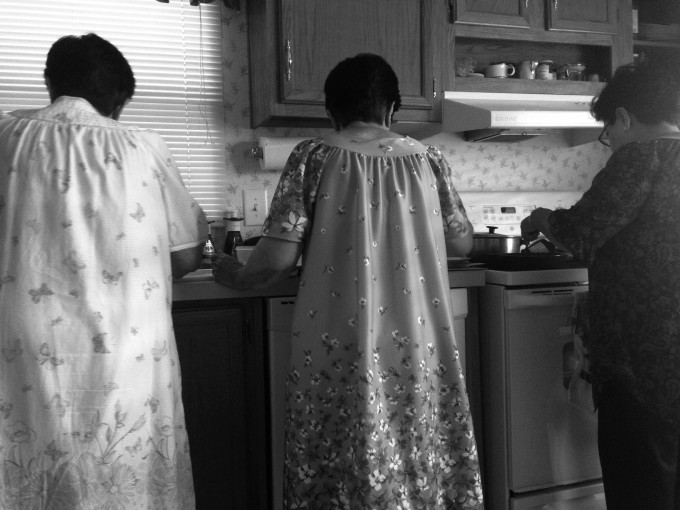 Hilda cooks lunch with her friends in their trailer. © Edna Ledesma

“We are trailer trash to them. People say that people that live in trailer parks are trash, which means they’re no good, is what that basically means …This here is a trailer park but it’s not trailer trash because it’s set up nice and it’s good and there’s good people.” © Edna Ledesma 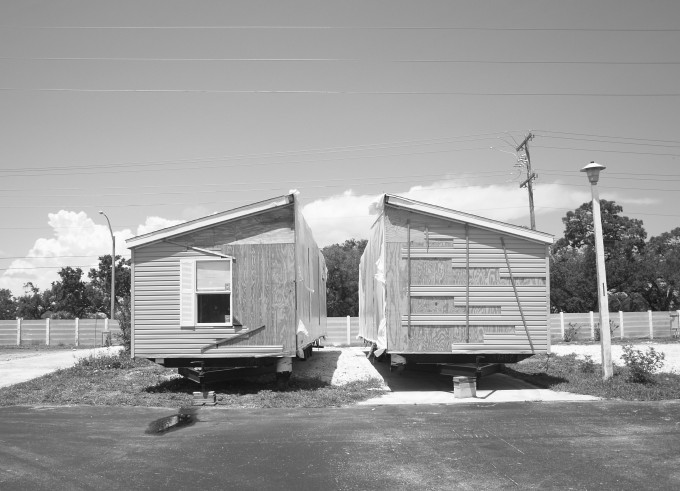 “You get to a point where you’re like, ‘God Christy, I thought by the time you
were 50, you would be a little more settled.’ I never planned on leaving here.”
Joan: “It’s just miserable, you know. Everything familiar is gone. This is the first place I’ve ever lived in Florida. This is where I planned to die.” © Edna Ledesma 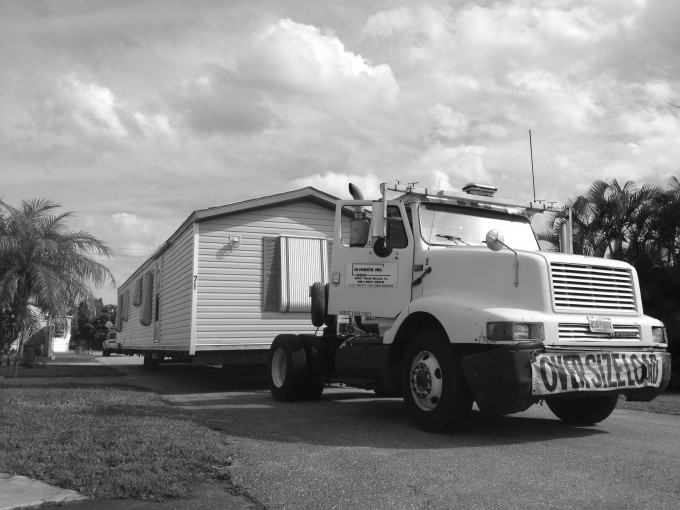 “The builders figured out that they can buy these parks and get rid of the people cheaper than they can actually go and buy the land and pull buildings down and stuff. So I got in with the builders; I’ve actually been closing these parks for almost 25 years … They’d call me and they’d say, ‘Listen, we are going to go close this park,’ two or three months before anybody would know. And I would go stake out these parks, and I would just ride around quietly and I would check everything out and see what was going on, and I would give them an idea of what was going to cost. And then we’d set up a deal … I have the contract, the builder is getting the thing emptied. Everybody is happy!” © Esther Sullivan 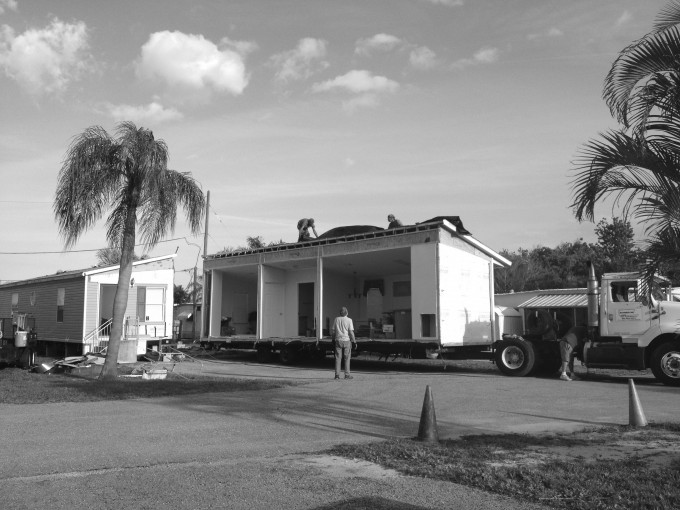 Today I’m talking over Walter’s plans for Monday, when his home will be moved. I tell him that I want to be here to see him moved and to get his feelings recorded. Pulling my recorder close to his mouth he points out that he can answer that for me right now and says, simply, “Confused.” © Esther Sullivan 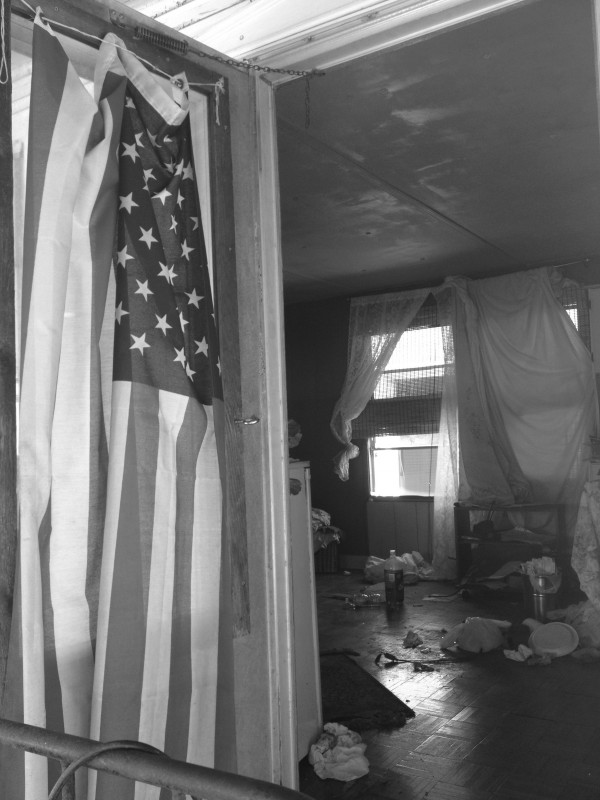 Interior of Francis’ home. Francis’ home, like many others, was too old to move. Francis was blind, completely homebound, and unable to walk without assistance. She explained that her independence was the most important thing to her, and she was able to live alone comfortably because she was so familiar with the layout of her small mobile home. Now it is abandoned.

“I knew it was gonna come but, I am all by myself. It makes it harder that way, to be all by yourself …You can’t [imagine], unless you’re my age and you go through the same thing… I’ll get through it. I’ll get by. When you get to be my age, then you will see how hard it is.” © Esther Sullivan 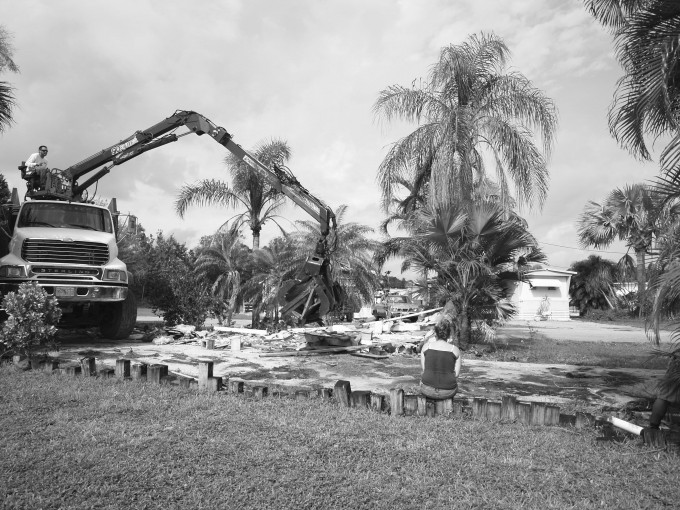 Kathleen one year after moving and two years after receiving the first notice of the sale of Silver Sands:

“It’s been living hell for two years …I’m not happy …I don’t know anybody. Down there,” she sighs, “everybody knew everybody.” © Edna Ledesma

“We drove through there last weekend, the place looked like a war zone …I got upset. Don’t get me wrong, this is my home you are taking away …But I got over it. I said, ‘It’s time. You gotta do what you gotta do. It’s either find a place or find a bridge.’”

A pile of soil containing the remnants of residents’ former homes sits at the former site of Silver Sands. A sign reads “Wash Out,” indicating these remnants must be removed before the soil is reused. Silver Sands is now being redeveloped into 350 rental apartment units. © Esther Sullivan 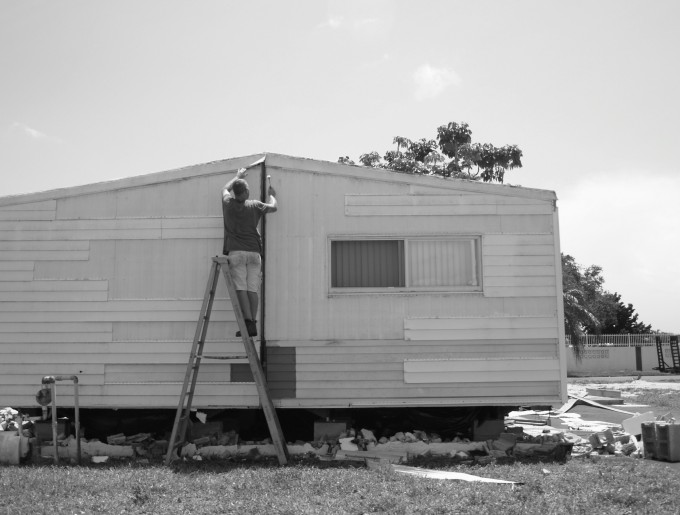 Professional movers readied residents’ homes for relocation, but many chose to carefully perform this work themselves. As Bob pointed out, “This is my home. This is my home you’re taking away.” © Edna Ledesma

Esther Sullivan is in the sociology department at The University of Texas at Austin. She has an interest in urban sociology, poverty, and inequality. Edna Ledesma is an urban designer and photographer. She is in the urban and regional science program at Texas A&M University.

Really nice essay. Where did the residents go? To another site?
It would be interesting to see images of how Silver Sands is gentrified a few years from now.

Great writing! You have really given these people and their issues a voice.

Esther Sullivan is in the sociology department at The University of Texas at Austin. She has an interest in urban sociology, poverty, and inequality. Edna Ledesma is an urban designer and photographer. She is in the urban and regional science program at Texas A&M University.