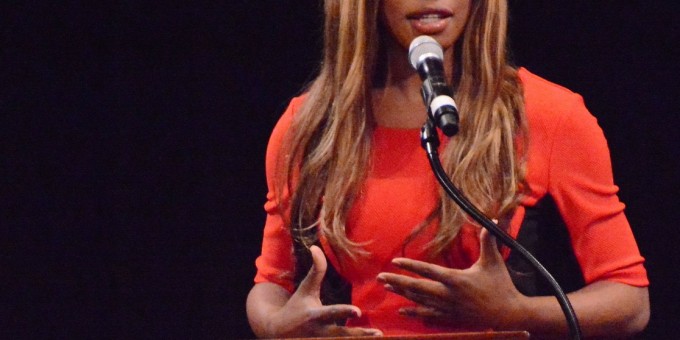 Laverne Cox, a star of Orange is the New Black, speaks at the Missouri Theater. Photo Taylor Pecko-Reid/ KOMU 8 via Flickr CC.

Orange Is Mostly the Same Gender

People noticed Orange is the New Black for its attention to gender and sexuality. The show features a transgender character, Sophia, which gives welcome representation to the struggle over transgender rights. But because of her transition through gender reassignment surgery, does the character actually reinforce binary notions of gender?

Writing in Gender & Society in 2014, Laurel Westbrook and Kristen Schilt explore how contexts play a role in the criteria used to determine gender, drawing on three cases: public debates over transgender employment rights, policies that decide eligibility for transgender people in sports, and proposals to remove the genital surgery requirement to change sex categories on birth certificates. From these cases, the authors identify two main ways gender is determined: through identity-based criteria or through biology-based criteria. Social context affects which criteria are used.

So does OITNB’s Sophia challenge the prevailing sex/gender/sexuality system? Yes and no. Yes, there is an opportunity for the category “woman” to be expanded by trans representation. But mostly no, because Sophia is quickly reabsorbed into that system. For Sophia to belong, the audience is led to imagine that she has transitioned, importantly, removing anatomical markers of maleness. For example, when the prison reduces Sophia’s dose of estrogen, there is a moment of gender-related panic: without the correct dose, is she a woman? This could have been a powerful moment of undoing, bringing into question gender and the problematic assumptions that police gender-segregated spaces. Instead, a flashback confirming that Sophia is in prison for committing fraud to finance her gender reassignment surgery dissolves the panic and reabsorbs her into an unquestioned gender binary.