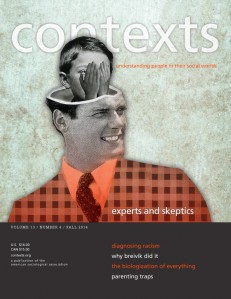 From biological explanations for social behavior, to understanding political violence, electronic dance music parties, and sex research, this issue explores how experts set the terms of much of the knowledge we take for granted, and how skeptics contest these so-called truths.
Download this issue
Previous Next

by Corey FieldsWinter storms now have names like Hercules and Maximus, thanks to the Weather Channel. By naming storms, … Read More

Molly Deaths and the Failed War on Drugs

Sociologist Tammy L. Anderson proposes that the 2003 RAVE Act may endanger ravers more than protect them. Today's popularity of huge commercial raves—and the incidence of health complications at them—suggests this relic law of the twentieth century War on Drugs needs our attention.. Read More

Is racism a matter of individual psychopathology? Can disabled women be good parents? Does prohibiting drug use at electronic music dance parties save lives? Can … Read More

Robert H. Richards IV, an heir to the du Pont fortune, was convicted of sexually abusing his own child. Justifying her decision to put Richards … Read More

by Corey FieldsIf you are a teen with a social media account, chances are you have posted a selfie. Read More

Earlier this year, survey researchers at the University of Michigan questioned citizens of seven Muslim countries about how they think women should dress. They asked … Read More

Economist Guy Standing explains how millions of people are in the precariat, and in defining this emerging class, points to the dangerous political and social consequences as well as the exciting progressive revival that this class could produce. Read More

Sociologist James M. Thomas examines how public and scientific accounts of racism draw upon medical and psychological models, and how this contributes to our understandings of racism as a medical, rather than social, problem. Read More

Sociologist Angela Frederick argues the legacy of the Eugenics movement persists today. She explores how mothers with disabilities continue to face pervasive threats to their right to parent. Read More