Elizabeth Lesser is the cofounder of the Omega Institute for Holistic Studies in Rhinebeck, NY, one of the nation’s first and most prominent centers for holistic learning. Inspired by the teachings of Sufi master Pir Vilayat Inayat Khan, Omega was founded on the worldview that the well-being of each individual is deeply connected to the well-being of all living things. Lesser has spent more than 30 years studying and working with leading figures in the fields of emotional intelligence, psychology, arts, and healing, both of the self and of society.

Lesser is also the New York Times best-selling author of The Seeker’s Guide and Broken Open, and she is a frequent speaker at conferences worldwide. She worked with Oprah Winfrey to produce the 10-week webinar for Eckhart Tolle’s book, A New Earth, which has been viewed by 35 million people.

Eve Fox: It’s been 38 years since you co-founded the Omega Institute. What was it like back in 1977?

Several other big movements rose up, one of them being the women’s movement. Women were suddenly saying, “I don’t know if I want to follow this road that’s been paved for me—graduate from high school, maybe go to college, but leave as soon as I find a husband and raise kids. End of story.”

When I entered Barnard College in 1970, it was the height of the demonstrations against the Vietnam War, Martin Luther King, Jr. had been murdered, the Civil Rights Movement was becoming more radicalized, and feminism was really taking hold. At 18 years old, I found myself in New York City submerged in the world of student protests. But at the same time, I had an even stronger pull towards another movement that was just beginning to happen as the gurus from the East began washing up on the shores of America. I’d had a yearning for some kind of spiritual life ever since I can remember, even as a young child. My parents were atheists; I had no religious training. In fact, in my family, religion was synonymous with a lack of intelligence. But I was strongly compelled to check it out. So I had two very strong aspects of myself—a political/social justice self and a spiritual self. That was what brought me to the spiritual search.

EF: How did you get introduced to the world of Eastern spirituality?

Pir Vilayat’s idea of education was holistic (hence Omega Institute for Holistic Studies). That’s why Omega’s curriculum from the beginning has included arts, science, spirituality, medicine, psychology, and working for the social good. Rather than focusing solely on the individual, it’s rooted in the reality that we live in a community.

EF: Before you and Stephan founded Omega, you were part of a Sufi commune in New Lebanon, NY. Tell me about your experience at The Abode of the Message.

EF: What sorts of things did people clash over?

EL: Conflicts could be as big as “Can each member of the commune have their own car?” because we were trying to be sustainable to “How much cheese is each child allowed to eat each day?” to “Who gets to have a pet?” to “Should anyone be allowed to have a pet?” To make matters worse, we tried to solve everything by consensus—bad system! My liberal ideals were tested, and I actually became more conservative in my thinking as a result. I learned that hierarchy is necessary, or you end up mired in process all the time. One of Pir Vilayat’s sayings was “shatter your ideals on the rock of truth.” The truth I learned living in community was that compromise is needed at every turn.

EF: Did the Abode disband?

EL: No, it’s still there, although it’s much, much smaller now. Financially, it’s been very difficult for them to sustain it. I haven’t been there in quite a while—I’m actually going there this summer for a reunion. In its heyday, in the mid 1970s, it was about 200 people. We had businesses, a huge farm, and a school. We had a midwifery team and delivered babies on the commune and all around. And then Omega was born there in 1977.

EF: What did those early days of Omega look like?

EF: How many people came?

EL: From the very first time we announced it in a Xeroxed pamphlet, we were overwhelmed by the response. We weren’t ready for it and didn’t know how to do it—we were just a bunch of hippies living on a commune, no one had been to hospitality school! But we never stopped growing.

EF: Were the participants all young hippies?

EL: In the beginning it was mostly young people like ourselves, which was good, because we had to do it all on an extremely tight budget and everyone was happy to come live in a tent. And the teachers, many of whom now command \$50,000 for a one-hour lecture, came for free or for very little honorarium because they were just so happy that someone wanted to listen to what they had to say. So we could charge very little. But as the interest in these subjects grew, we needed our own home. That’s when we went looking for the campus. 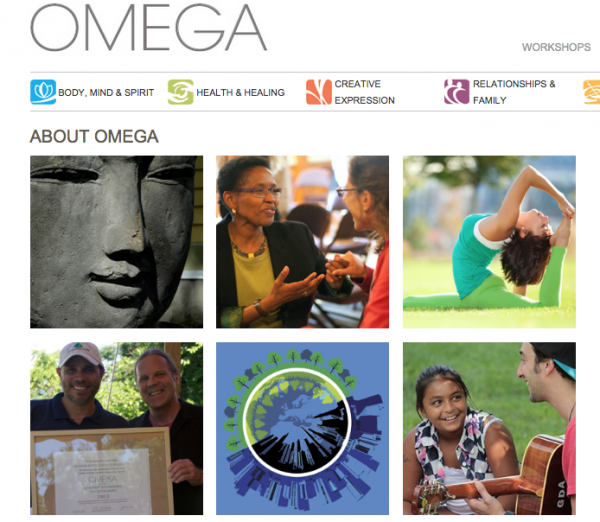 EF: Did you have a vision for Omega to become a real center for this movement?

EL: Well, yes and no. We believed so deeply in what we were doing—to expand what it meant to be a human by expanding your consciousness and becoming physically healthy—and we wanted the world to benefit from it. So we were mission-driven. But if you were to say, did we expect that 35 years later, 35,000 people a year would come to a huge campus? No, I didn’t have that in my mind.

But we believed in it so much that we just worked really hard. It’s all we did. We made no money at all for a long time. We were all volunteers and we ran it on a shoestring. From year to year, we didn’t know if we’d be able to keep going. It took us about 10 years to establish it to the point where it began to make some money and feel like it was definitely going to be there the following year!

I often think of Omega as something that existed outside of our imagination and we just kind of hooked on to it and it took us for this ride. And that’s not to diminish the hard work and foresight of those of us who created the business model and the curriculum and campus experience. But it was the right time and the right place. By the time the culture caught up to us, we had really honed some skills around how to offer educational experiences around these subjects.

EF: What prompted you to create the first of the remarkably successful Women and Power conferences in 2002?

EL: I had always done things for women at Omega. From the very beginning there were courses specifically about women’s health and spirituality. I had no intention of starting a big conference series that would turn into a women’s leadership center. I had conceived of and produced many, many conferences on lots of subjects, and I just thought I was doing one conference.

I had the idea to organize a conference around a question that seemed to make people uncomfortable: What happens when we put the words “women” and “power” together? I like creating conferences around uncomfortable subjects and asking “why does this make us uncomfortable?” So I invited Anita Hill—certainly someone who had taken an uncomfortable risk in the realm of power—and a woman whose play, The Vagina Monologues, I had seen, but never met named Eve Ensler, and Gloria Steinem and several others to come and explore —how does it make us feel and how does it make the world feel to put “women” and “power” together? Besides being a fabulous conference, it attracted hundreds of people, and they were clamoring for more.

So we did another one and it just took off. It was before a lot of the “lean in” culture had begun. It was really just the beginning of this question of women claiming power and saying, “It’s not only that we want to be powerful, we actually want to change what it means to be powerful,” and asking, “Can power not be synonymous with domination and aggression—can we claim power for ourselves?”Being a social justice activist and a spiritual seeker—they came together for the first time in a conscious way…. my spiritual self could find a way to marry my activist self.

And in doing so, for me, personally, what happened were that those two streams I was talking about earlier—being a social justice activist and a spiritual seeker—they came together for the first time in a conscious way. It was the first time that my spiritual self could find a way to marry my activist self.

Eve Fox is a writer and expert on nonprofit advocacy, fundraising and movement-building. Read more on her blog at thegardenofeating.org.

If you wish for to take a good deal from this post then you have to
apply these techniques to your won webpage.

Eve Fox is a writer and expert on nonprofit advocacy, fundraising and movement-building. Read more on her blog at thegardenofeating.org.