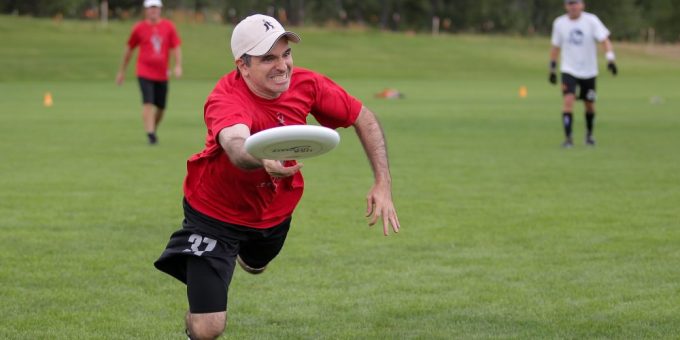 The author goes for a diving catch at the 2015 USA Ultimate Masters Championships. © Christina Schmidt/Ultiphotos.com.

Life is a game with many rules but no referee. —Joseph Brodsky

In 1986 Argentina was playing England in the quarterfinals of the World Cup when the legendary Maradona scored what became known as the “hand of god” goal. He had used his hand to score illegally, but the referee missed it. England was mighty pissed, but had to play on. Certainly, no one expected Maradona to tell the referee, “Sorry, you need to disallow the goal.” Nor did Maradona admit his illegal touch: despite the evidence on the video replay, he said the goal was the work of “the hand of god.”

In soccer, the referee makes the call. Sometimes it goes your way, sometimes it doesn’t. But here’s an interesting thought: what would have happened if there was no referee? What if it was left up to the players on both teams to agree on what actually transpired?

Ultimate’s history helps us see the contours of competition and character. Born in the late 1960s at a high school in Maplewood, NJ, the frisbee-based sport had righteousness in its roots. The rules dictated that players make their own calls in a self-officiated “spirit of the game.” They assumed all players would compete with honor and respect for their opponent. I began playing in high school in 1978, and those basic tenets were passed down to me right alongside how to throw a forehand.

Throughout ultimate’s first 20 years, games were fully self-officiated at all levels of competition. The vast majority of players adhered admirably to that spirit. But as competition got more intense, when national titles were on the line, the results became less predictable. Aggressive behavior went unpunished, bad calls were made, and arguments interrupted games for lengthy stretches. Sometimes it was just a few bad apples engaged in plain old cheating. More often, it was the result of well-intentioned players who couldn’t remain objective in the heat of competition. And all this angst and foul play was directed toward what huge prize? Nothing. There was no prize money, no television coverage, not even the risk of being dropped from the premier league in the next season.

If a bunch of well-meaning, spirit-striving frisbee players can’t self-regulate in a competitive game with no tangible rewards, what would most human beings do (consciously or unconsciously) to win in a high-stakes commercial sport or in the world of business without objective enforcement? That’s why we have regulations, laws, and, yes, referees.

This was the state of ultimate through the mid-1980s: plenty of good spirit and sportsmanship at most levels, but far too much of the dark side at the highest levels. There, spectators saw players clawing for every advantage, now and then even coming to blows.

Thus, right around the time of Maradona’s “divine intervention,” there began a compromise. Rather than putting in referees in the traditional sense, the Ultimate Players Association (then the governing body for the sport) started to incorporate passive “observers” at more competitive events. Observers were objective fellow players to whom those in the competition could turn to arbitrate disputed calls. Their role was fairly limited, however, and responsibility for fair play still rested with the players on the field. Though this seems like a pretty reasonable step, the debate among players at all levels at the time was fierce (and, as the Times reports, it still rages today).

When the change was first introduced, some players were so anti-observer they would refuse to turn to the observers even when it was clearly in their best interests to do so. I served as an observer at the finals at the World Club Championships in Toronto in 1991. In the match between Boston and New York, a poorly thrown pass was scooped up on a diving catch. The New York player—someone I had known and played with for years—was a good player, a good guy. He wasn’t known to make bad calls. He declared it a clean catch and readied his next throw. There was just one problem: the disc had clearly bounced off the ground and into his hand. In ultimate, that’s a turnover.

A chorus of boos rose from the crowd, and the opposing team stopped play to dispute the call, but the New York receiver was unfazed in his conviction. That’s what happens in the moment: you become convinced you made a great catch, and you’re probably not going to check in with the observer. I stood waiting patiently for Boston’s players to consult me; under the observer protocol at the time, I wasn’t allowed to comment on the play unless and until the players asked me to.

After a few minutes of player banter, Boston surprised me. They agreed to let the “catch” call stand, rather than ask me, an unbiased observer. I was shocked. The crowd got louder as a young lady raced toward me from the stands. She angrily demanded, “Did you really think that was a catch?” I explained that I wasn’t able to comment, even if I was certain that it was a turnover. She yelled out in disgust and headed back to her friends in the stands in a huff. Fans really do hate when the wrong call wins out.

But, back to this oddity—why didn’t Boston ask for my ruling? The answer seemed clear to me: they just weren’t ready to cede their rights to self-officiating. Even if it meant letting a bad call stand, players would rather display their sport’s high ideals.

As the years went by, there was increasing acceptance of observers at high-level games, and the fear that the sport was losing its core spirit principle, and might ultimately die, went unrealized. Ultimate grew exponentially. It would be a stretch to argue that the observer modification actually spurred that growth, but it certainly doesn’t seem to have hurt it. Some fledgling professional leagues have even instituted more traditional referees.

Does this mean the whole “spirit” thing was a fruitless endeavor? As someone who has played the game for more than 35 years, I can say unequivocally no. The Times quotes ultimate leaders who point to the sport’s tenets as ideal for an event like the Olympics and for promoting their own sport’s continued growth. But a bigger question might be whether individuals participating in a sport that demands fair play and honesty develop and display those traits more prevalently in everyday life than they otherwise would have. As much as I experienced my share of high-level angst, even top-level games were played with good spirit and even those that saw disagreement almost always ended with a genuine and positive exchange of good sportsmanship. Whether observers had been used or not, both teams came together in the spirit of the sport.

To be sure, ultimate players absolutely think the focus on good sportsmanship is important; a 2007 study by the Ultimate Players Association showed a full 85% of respondents agreed that the “Spirit of the Game” was essential to the sport. That’s a good indication that at a minimum players want to be good, and it’s hard to see how that could be a bad thing.

The Boy Scouts of America seem to agree as well. Last year, they formed an alliance with ultimate’s now-governing body, USA Ultimate, as part of their SCOUTstrong healthy living initiative. They cited ultimate’s ability to build good sportsmanship and teamwork.

For me, the evidence of the positive impacts of ultimate is on display every week. I play in a New York City league where the games are competitive, but rarely disputed. There are no observers or referees. Hopefully that is the state of ultimate across many levels of competition that still make sportsmanship and self-officiating paramount. And it’s good to think that all those ultimate players might carry those positive character traits into other aspects of their lives.By engaging in activities like ultimate that push us to self-regulate around high ideals of model behavior, we may be able to decrease the need for outside enforcement of the rules.

Ultimately, there’s no reason to get hung up on musing whether Maradona should decide the legality of his goal with the World Cup on the line. In so many situations, we need both rules and an objective means to enforce them. But we shouldn’t need life refereed at all levels in all activities. It’s neither desirable nor efficient. And by engaging in activities like ultimate that push us to self-regulate around high ideals of model behavior, we may be able to decrease the need for outside enforcement of the rules, reinforce positive character traits, and increase our enjoyment of human interaction. Without falling back on a contrived “hand of god,” maybe we can reach up toward a higher, if wholly human, spirit.

Philip Vlahakis is a former national and world champion in ultimate who has competed at 16 national championships across multiple divisions. He has served as director of development for the Ultimate Players Association, run the NYC summer league, and captained college and open division teams.

Philip Vlahakis is a former national and world champion in ultimate who has competed at 16 national championships across multiple divisions. He has served as director of development for the Ultimate Players Association, run the NYC summer league, and captained college and open division teams.