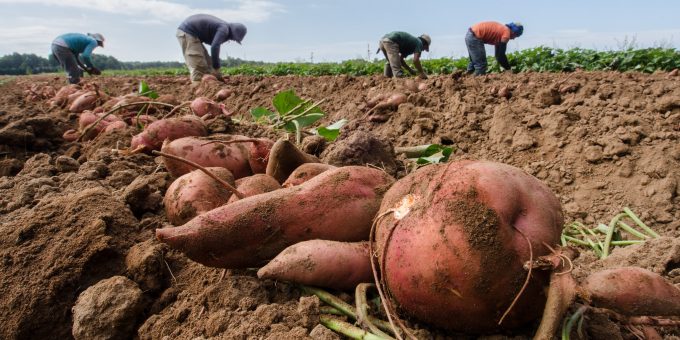 US Dept. of Agriculture, https://flic.kr/p/h4Wf1L

Beginning with the Immigration Control and Reform Act of 1986, the U.S. government developed a formal authorization category for immigrant farm labor: the H-2A Temporary Agriculture Workers visa. The Office of Foreign Labor Certification certified 48,300 H-2A visas in 2005, 98,800 in 2013, and 165,700 in 2016. Yet this ever-expanding program faces major problems, such as operating through labor subcontractors that shield employers from legal responsibility and increase H-2A laborers’ susceptibility to labor rights violations.

At the same time documented migrant farm labor has been rising, the United States has implemented an increasingly harsh system of criminalizing undocumented migrants and attempted to administratively exclude undocumented workers from the labor force through E-Verify. Republican members of Congress signal that they understand immigration policy as a labor policy and are seeking to bolster temporary migrant farm labor to compensate for any lost undocumented labor due to increased immigration enforcement at workplaces. For example, Bob Goodlatte (R-VA) introduced the Ag and Legal Work Force Act to create an H-2C visa that would extend the contractual period (without providing H-2A workers the option to change employer). This would exacerbate current problems, whereby farm workers get stuck with abusive employers. At the same time, positive proposals, such as the Fairness for Farmworkers Act, have been put forward to redress problems in the regulation of farm labor by making such workers eligible for overtime pay.

Historical and contemporary evidence demonstrates the current institutional problems and helps provide a series of just alternatives to the current H-2A system.

Following the New Deal, the U.S. agriculture sector saw rapid change in its labor force, spurred by labor policies packaged as immigration policies. From 1942 to 1964, the Bracero Program led to a temporary migration of almost 5 million men from Mexico. At the same time, the U.S. government began forcefully deporting migrants. Growers supported this immigration apparatus, because the threat of deportation made a particularly strong form of labor control and wage suppression (with enforcement funded by taxpayers). Even when growers found deportations problematic because they caused periodic labor shortages, they continued to support punitive immigration policy as a whole.

After the Bracero Program ended, the Department of Labor began to play a larger role in immigration policy by certifying whether labor was necessary and would not affect compensation and workplace safety. To this day, this piece of immigration policy remains easily circumvented (growers simply place ads for jobs in far-away states).

Immigration policy has only gotten more punitive. In the 1990s, with the passing of the Illegal Immigration Reform and Responsibility Act and the Anti-Terrorism and Effective Death Penalty Act in 1996, the category of who was deportable expanded. The increasing militarization of border security and immigration enforcement brought very real fear to vulnerable communities.

For example, an immigrant farm laborer with an H-2A visa is tied to a grower through a contract. They do not have the right to seek out employment with another employer. Instead, they must return to their home country to secure a new contract and return. This means H-2A farm laborers are at an enormous disadvantage in terms of their labor rights: losing their job literally means losing their ability to work in the United States all together. Workers are put in the precarious position of demanding their rights at the risk of losing access to the economic means to survive.

And these laborers need to be able to exercise their rights. According to the Department of Labor, from 2000 to 2017 there were 93,447 reported violations of labor law against H-2A laborers. With anywhere between 100,000 to 200,000 H-2A laborers in the country every year, that is a minimum violation rate of one violation per every 36 laborers—and, again, that’s only what’s reported.

If we focus on wage theft, a Farmworker Justice report found that from 2010 to 2013 the Department of Labor assessed \$18 million in back wages on 4,231 cases with violations. This amounts to an average \$4,254 of stolen wages per violation. The report goes on to state that “the data are consistent with observations of extensive non-compliance with labor laws in agricultural workplaces.” Among the most frequently violated labor laws, we see everything from minimum wage laws to meal break violations, theft, and refusal to pay. Many of the growers who violate workplace laws do so with impunity: government austerity has left regulators with few enforcement resources, and draconian immigration policies make fewer and fewer H-2A workers willing to step forward with complaints in the first place.

Employers’ impunity is reinforced by workers’ invisibility. Media rarely talks about farmworkers, reporting far more often on how crops are rotting than on laborers’ working conditions. The majority of Americans don’t know that 423 farm workers died from heat stress between 1992 and 2006, nor that agriculture is the third most fatal industrial sector in the United States. Growers are not even legally obligated to inform workers of their rights or their legal obligations to pay taxes. Unknown rights cannot be exercised.

To protect the workers who put food on American tables, we need policy that centers immigrant farm labor and addresses the effects of immigration policy as labor policy on wages and labor conditions.

The first step is to increase funding for enforcement of existing labor regulations and rights. In many states, there are no regulators to enforce minimum wage violations, and an underfunded federal Department of Labor does not have the capacity to enforce the rules. Enforcement has, instead, devolved to a network of non-governmental organizations, like Farmworker Ministries, that are chronically underfunded, rely on volunteers, and have no regulatory powers. Increased funding for both regulators and non-governmental organizations, especially to hire labor lawyers to represent workers, would increase worker power with regard to the gatekeepers that broker their rights and their employers.

Next, we should strengthen farm worker protections and standards. While the Occupation Safety and Health Administration mandates the supply of water and 15-minute breaks in a shaded area, the breaks are only mandatory above 103° F. By implementing stricter standards for labor conditions, OSHA could drastically reduce farm worker injuries and fatalities. Further, higher standards in housing and sanitation will provide for better quality of life for these temporary workers.

Other proposals should address worker autonomy. Currently, the H-2A laborer is contractually tied to a given employer. Even if that employer refuses to pay their workers during poor harvests, those workers can’t seek other employment. To do so would mean violating their visa and becoming deportable. According to Farmworker Justice, by de-linking the H-2A worker from a specific employer, workers gain the autonomy to exercise their labor rights, like free contracting and unionizing.

A final, crucial step toward farm labor reform is the Agricultural Worker Program Act, which would provide a path toward legalizing status and citizenship for migrant workers. Creating a formal and open process toward legal status would undermine the use of deportation, strengthen the farm workers’ capacity to exercise their labor rights, and actualize the universal right to free movement.

Andrew Smolski is in the sociology and anthropology program at North Carolina State University, where he is a Center for Environmental Farming Systems Graduate Fellow.

Andrew Smolski is in the sociology and anthropology program at North Carolina State University, where he is a Center for Environmental Farming Systems Graduate Fellow.