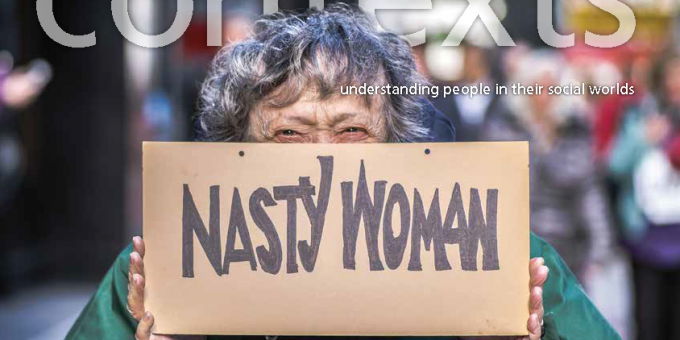 The Winter 2017 issue of Contexts is available for free online until April 23, 2017 at http://journals.sagepub.com/home/ctx. In addition, links to select articles below will go live as the articles become available on contexts.org over the next month. If a link does not work, the article has not yet published on our site.

Letter from the Editors
Syed Ali and Philip N. Cohen

In Brief
Immigrant obesity and distrust toward non-believers: New research from the journals.

Q&A: Observing Life and Death in America
Gary Younge on reporting on the 2016 presidential election and the prevalence of childhood gun deaths in the U.S.

Love Wins?
Amanda K. Baumle and D’Lane R. Compton
For LGBT individuals who have experienced exclusion from legal marriage, the choice to suddenly embrace an institution that they perceive as flawed, discriminatory, and symbolic of gender inequality can present irreconcilable differences.

Could There Be a Silver Lining to Zika?
Caitlin Killian
Public health crises around Thalidomide and Rubella changed American public opinion around abortion policy. But could the spread of Zika do the same amid an outbreak of new state-level restrictions?

“Straight Girls Kissing” Beyond the Elite College Campus
Jamie Budnick
Our best sexuality theories are based on research that overlooks a clear pattern: women with the lowest levels of education now report the highest lifetime prevalence of same-gender sex.

In Pictures: The Sadness of the Border Wall
David Bacon explores how the U.S./Mexico border wall affects those it separates.

Scorn Wars
Nina Eliasoph on The Politics of Resentment, Strangers in Their Own Land, and Hillbilly Elegy.

What’s So Cultural about Hookup Culture?
Lisa Wade on the Norms and Practices of College Sex

A “Real” American Indian
Kimberly R. Huyser on the durable power of images.

Back Page
Intersex and the Social Construction of Sex
Georgiann Davis and Sharon Preves on Moving from “What” to “Who.”