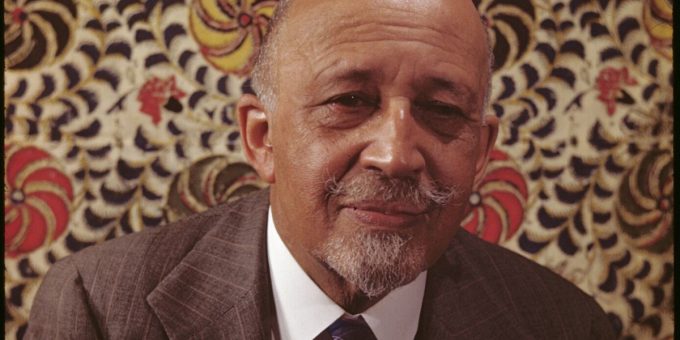 In the weeks and years following the conclusion of World War II, Du Bois had traveled the globe advocating for nuclear disarmament and sending peacegrams generated from the Stockholm Peace Resolution. On July 13, 1950, just a few months after his 82nd birthday, W.E.B. Du Bois opened the New York Times to find an ominous threat and accusation charged at him and his organization the Peace Information Center: Secretary of State Dean Acheson had written, “I am sure that the American people will not be fooled by the so-called ‘world peace appeal’ or ‘Stockholm resolution’ now being circulated in this country for signatures. It should be recognized for what it is—a propaganda trick in the spurious ‘peace offensive’ of the Soviet Union.” Over the next six months, Acheson’s attacks on Du Bois escalated, even upending longstanding plans for a major bash in honor of Du Bois’s 83rd birthday. Just weeks before his birthday, the Department of Justice formally indicted Du Bois as a foreign agent/spy. “On February 8 I was indicted for an alleged crime,” Du Bois (1968: 367) intimates in his autobiography, “on February 14, I was married secretly to Shirley, lest if I were found guilty she might have no right to visit me in jail; February 16 I was arraigned in Washington and on February 19, four days before the dinner.”

Even more, the venue for the birthday bash, the Essex House, canceled his dinner party reservation due to the government’s allegations. With the help of his closest supporters, notable sociologist E. Franklin Frazier, Du Bois’s 83rd birthday shindig was moved from Midtown Manhattan to the chocolate city, Harlem, at Small’s Paradise.

By November 1951, 83-year-old Du Bois was on trial at a federal courthouse in Washington, D.C., his life and reputation hanging in the balance. Although over his life he helped found the NAACP, American sociology, and a whole host of ideas and keenly trained students, as the trial loomed Du Bois found himself without the full range of friends and associates he had gained over his long career. The toll of the ordeal was obvious at the trial as his jovial nature and youthful spirit had morphed into a worn and hunched posture, fear and worry having etched visible lines in his otherwise smooth brown face.Du Bois’s post-war pivot toward Africa, which led to his fervent interest in ensuring international peace and equity for maligned peoples and nations, had started an intellectual and activist journey that shattered the scholar’s faith in the American democratic project.

After a six-day trial, Du Bois was ultimately found innocent. But the damage had been done. As soon as he was able, he departed the United States for Ghana, at the invitation of President Kwame Nkrumah, never to return. Today, just beyond the shores of Labadi Beach, Ghana, sits Du Bois’s final resting place. On a compound several miles from the Slave Castles a bust of his face stands beside House no. 22 First Circular Road—his last home, now better known as the W.E.B. Du Bois Memorial Centre for PanAfrican Culture. Du Bois’s post-war pivot toward Africa, which led to his fervent interest in ensuring international peace and equity for maligned peoples and nations, had started an intellectual and activist journey that shattered the scholar’s faith in the American democratic project. There, in a chocolate city across the Black Atlantic, Du Bois spent his last birthdays reflecting on and imagining a freedom that had not come in the near century he was on earth.

On this occasion marking his 150th birthday, the story of his indictment and expatriation must be told and remembered; Black scholars remain at risk and under attack. If an 83-year-old Du Bois was not safe, none of us are. We need only remember the recent death threats to and attempted media and professional assassination attempts on Saida Grundy, Zandria F. Robinson, Keeanga Yamahtta Taylor, and Johnny Eric Williams for evidence of the continued and pervasive attempts to disappear and destroy if not the lives of Black scholars, then at the very least the liberation ideology that lays at the heart of their work.

We should, of course, use Du Bois’s 150th birthday as an opportunity to revel in the life and work of one of the truest Black superheroes the world has known. But we must also remember, as A$AP Rocky reminds in the hook from “No Limit“: It ain’t safe. It ain’t safe. It ain’t safe. Until we live in a world in which it is safe to simultaneously advocate for peace and be Black without fear of death or defamation, to produce research that affirms the Black experience while challenging racial capitalism and White supremacy, Du Bois’s birthday must serve as annual marker, a new Black holiday to work together, support, and love on each other so as to ensure that what happened to him on his birthday does not assail the liberatory potential of another brilliant Black mind again.On this occasion marking the 150th birthday of one of the truest Black superheroes the world has known, the story of his indictment and expatriation must be told and remembered; Black scholars remain at risk and the liberation ideology that lays at the heart of their work remains under attack. If an 83-year-old Du Bois was not safe, none of us are.

Marcus Anthony Hunter is in the sociology department at UCLA. He is the author of Black Citymakers: How the Philadelphia Negro Changed Urban America and, with Zandria F. Robinson, Chocolate Cities: The Black Map of American Life.

W.E.B. Du Bois. 1968. The Autobiography of WEB Du Bois: A Soliloquy on Viewing My Life from the Last Decade of its First Decade. New York: International Publishers.

Marcus Anthony Hunter.. 2016. Du Boisian sociology and intellectual reparations: for coloured scholars who consider suicide when our rainbows are not enuf. Ethnic and Racial Studies, 39(8), pp.1379-1384.

It's very interesting and filled with historical details article. I searching for some historical information for writing me essay,although I always use free college essays because they do such tasks quicker.

Thank you for sharing the story! That is why is so important to remember history. I am glad that with real money winning apps I have a great opportunity to live like I want.

Thank you for a very interesting article! Today this topic is more relevant than ever.
For best slots sites please visit us!